Model of the N-1 moon rocket, the Soviet answer to the Saturn V 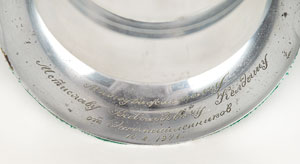 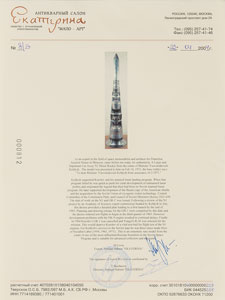 Model of the N-1 moon rocket, the Soviet answer to the Saturn V

Stunning cutaway model of the N1 moon rocket, a super heavy-lift launch vehicle that served as the Soviet rival to NASA’s Saturn V and was intended to enable crewed travel to Earth's Moon and beyond. Constructed of sundry parts metal and plastic, the model stands a lofty 24.5″in height and is set upon a metallic base 6″in diameter, which bears an engraved Cyrillic inscription (translated), “To dear Mstislav Vsevolodovich Keldysh from associates, 10. 2. 1971.” In fine condition, with some scuffing and wear to base and metal panels, and a small crack to middle plastic cut-section window. Accompanied by a certificate of authenticity.

Keldysh was a Soviet scientist in the field of mathematics and mechanics (1911-1978) who was one of the key figures behind the Soviet space program. After creating the Calculation Bureau, which is credited with the design of the first Soviet computers and carried most of the mathematical problems related to the development of nuclear weapons, Keldysh began devoting his time to jet propulsion and rockets, including supersonic gas dynamics, heat and mass exchange, and heat shielding. His collaboration with Sergey Korolyov and Mikhail Tikhonravov influenced the creation of Sputnik, the world's first satellite, in October 1957, and in 1961, he received his second Него of Socialist Labor medal for his contribution to Yuri Gagarin's historic flight into space.

The N1 launch vehicle, developed by Russia in the 1960's, was to be the Soviet Union's counterpart to the Saturn V. The largest of a family of launch vehicles that were to replace the ICBM-derived launchers then in use, the N series was to launch Soviet cosmonauts to the moon, Mars, and huge space stations into orbit. In comparison to Saturn, the project was started late, starved of funds and priority, and dogged by political and technical struggles between the chief designers. The end result was four launch failures and the cancellation of the project five years after Apollo landed on the moon.