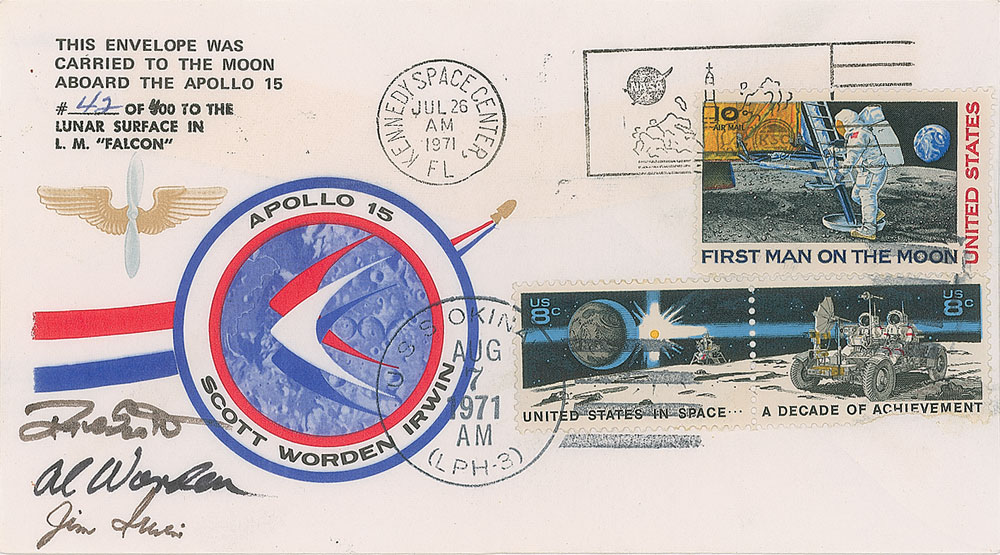 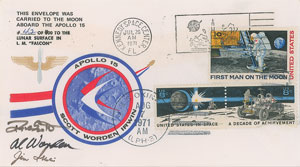 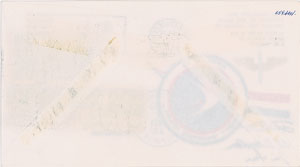 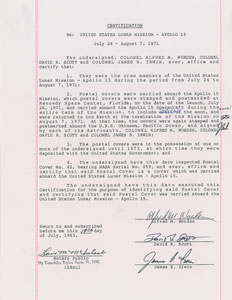 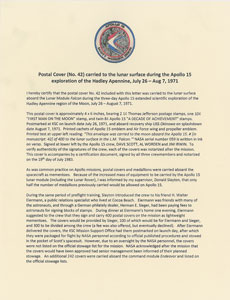 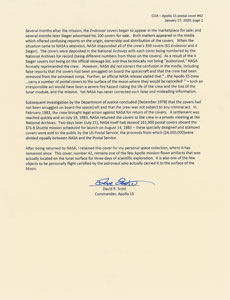 Included with the cover is a one-page typed notarized certification, signed “Alfred M. Worden,” “David R. Scott,” and “James B. Irwin,” dated July 19, 1983, reading, in part: “Postal covers were carried aboard the Apollo 15 Mission, which postal covers were stamped and postmarked at Kennedy Space Center, Florida, on the date of the launch, July 26, 1971, and carried aboard the Apollo 15 Spacecraft during the entire term of the Mission, to include landing on the moon, and were returned to the Earth at the termination of the Mission on August 7, 1971…The postal covers were in the possession of one or more of the undersigned until 1972, at which time they were deposited with the United States Government…The undersigned have this date inspected Postal Cover No. 42, bearing NASA Serial No. 059, and aver, affirm and certify that said Postal Cover is a cover which was carried aboard the United States Lunar Mission—Apollo 15.” All three crew members have also added their initials to a small correction in the text. In fine condition.

Accompanied by a lengthy signed letter of provenance from Cdr. Scott, which reads, in part: “I hereby certify that the post cover No. 22 included with this letter was carried to the lunar surface aboard the Lunar Module Falcon during the three-day Apollo 15 extended scientific exploration of the Hadley Apennine region of the Moon, July 26-August 7, 1971…As was common practice on Apollo missions, postal covers and medallions were carried aboard the spacecraft as mementoes. Because of the increased mass of equipment to be carried by the Apollo 15 lunar module (including the Lunar Rover), I was informed by my supervisor, Donald Slayton, that only half the number of medallions previously carried would be allowed on Apollo 15.

During the same period of preflight training, Slayton introduced the crew to his friend H. Walter Eiermann, a public relations specialist…Eiermann was friends with many of the astronauts, and through a German philately dealer, Herman E. Sieger, had been paying fees to astronauts for signing blocks of stamps…Eiermann suggested to the crew that they sign and carry 400 postal covers on the mission as lightweight mementoes. The covers would be provided by Sieger, 100 of which would be for Eiermann and Sieger, and 300 to be divided among the crew (a fee was also offered, but eventually declined)…Due to an oversight by NASA personnel, the covers were not listed on the official stowage list for the mission…

Several months after the mission, the Endeavor covers began to appear in the marketplace for sale; and several months later Sieger advertised his 100 covers for sale. Both matters appeared in the media which offered confusing reports on the origin, ownership and distribution of the covers. When the situation came to NASA’s attention, NASA impounded all of the crew’s 359 covers…The covers were deposited in the National Archives with each cover being numbered by the National Archives for record (being different numbers from those on the covers)…

Subsequent investigation by the Department of Justice concluded (December 1978) that the covers had not been smuggled on board the spacecraft and that the crew was not subject to any criminal act. In February 1983, the crew brought legal action against NASA for return of the covers. A settlement was reached quickly and on July 19, 1983, NASA returned the covers to the crew in a private meeting at the National Archives…After being returned by NASA, I retained this cover for my personal space collection.”