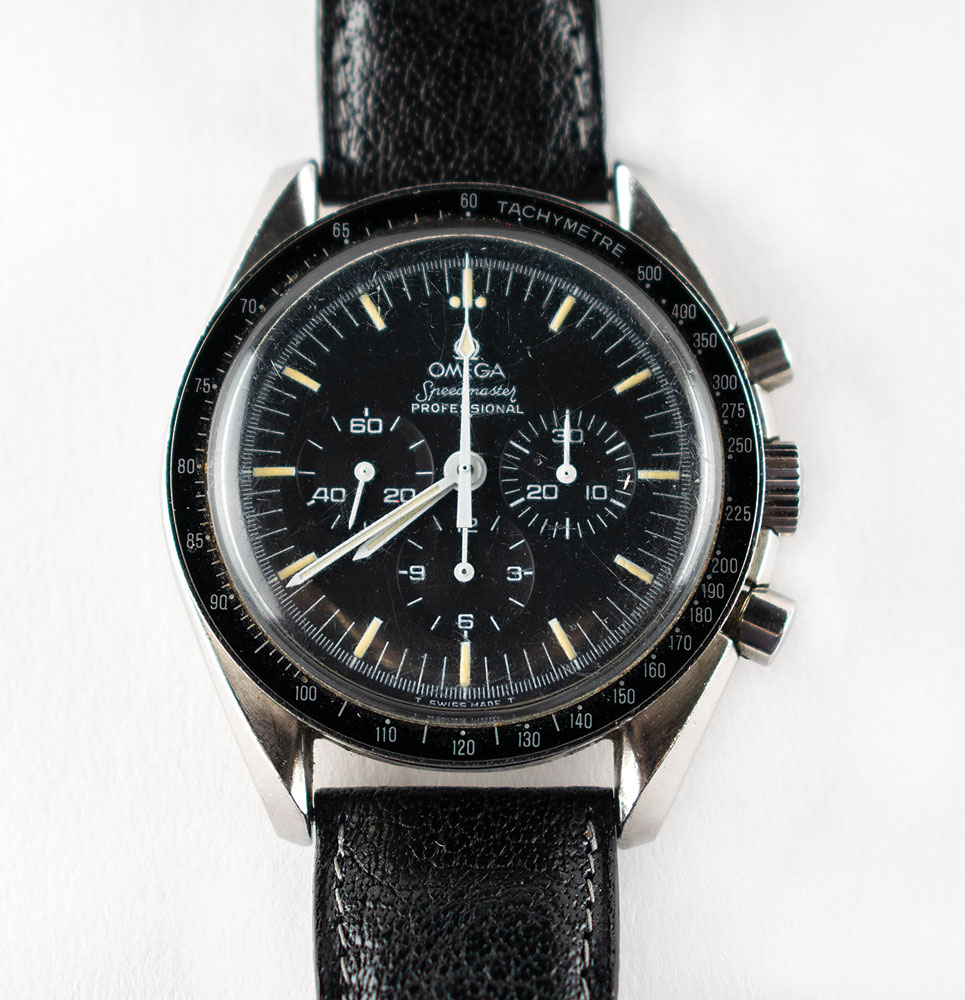 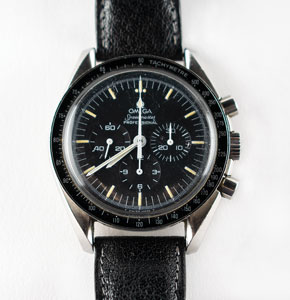 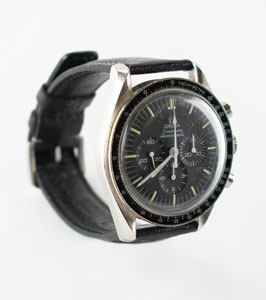 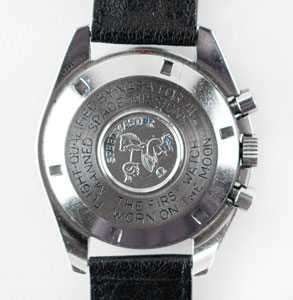 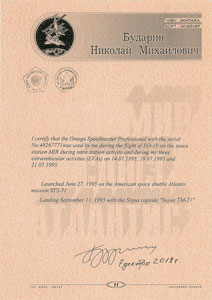 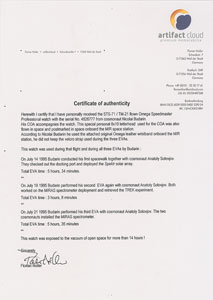 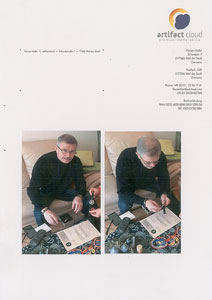 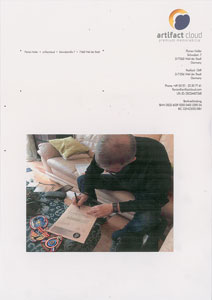 Cosmonaut Nikolai Budarin's flown Omega Speedmaster Professional (serial no. 4826777) used in the vacuum of space on his three EVAs during the historic STS-71/TM-21 joint mission between the United States and Russia, which included the first Shuttle-Mir docking. The iconic timepiece is a black-faced, stainless steel chronograph, manual wind wristwatch with a Plexiglass crystal, solid case back, anti-vibration and anti-magnetic dust cover, black tachymeter bezel and sub-dials, without date or day complications, powered by a caliber 861-based movement. Engraved on the case back is "Flight-Qualified by NASA For All Manned Space Missions / The First Watch Worn on the Moon." The watch is on a traditional black leather Omega band; according to Budarin, he used this wristband onboard the Mir space station, and did not keep the Velcro strap used outside of the spacesuit during his three EVAs. In fine condition.

Accompanied by a signed letter of provenance from Nikolai Budarin, on special stationery flown and stamped on Mir, in part: "I certify that the Omega Speedmaster Professional with the serial No. 48267771 was used by me during the flight of EO-19 on the space station MIR during intra station activity and during my three extravehicular activities (EVAs) on 14.07.1995, 19.07.1995 and 21.07.1995." Also includes a certificate of authenticity from Artifact Cloud.

On July 14, 1995, Budarin conducted his first-ever spacewalk alongside fellow cosmonaut Anatoly Solovyev. They checked out of MIR's docking port and deployed the Spektr solar array, spending 5 hours and 34 minutes outside the orbital station. On July 19th, Budarin performed his second EVA, again with Solovyev, preparing for the MIRAS spectrometer deployment and retrieving the TREK experiment in an elapsed time of 3 hours and 8 minutes. His final EVA on the mission came on July 21st, again with Solovyev, during which they installed the MIRAS spectrometer over the course of 5 hours and 35 minutes. As Budarin wore this watch during all three EVAs, it was exposed to the vacuum of space for over 14 hours!

Commonly known as the 'Moon Watch,' the Omega Speedmaster Pro underwent exhaustive testing by NASA during the 1960s—assorted wristwatches were exposed to environmental conditions ranging from 0 to 200 °F, tested under 95% humidity for ten day periods, endured bursts of high acceleration and shock forces, and experienced severe air pressure and vibration trials. After three years of extreme testing, the evaluation concluded in March 1965 with the selection of the Speedmaster, which survived the tests while staying accurate within five seconds per day. Most often associated with the Apollo program, the Omega Speedmaster has become one of the most iconic timepieces ever created. This example casts the famous 'Moon Watch' in a new light—used by Russian cosmonaut Nikolai Budarin, who spent a total of 444 days in space during his cosmonaut career. Although the 'Space Race' was born out of competition between Russia and America, the Shuttle-Mir program represented a renewed era of cooperation between former enemies. Swiss-made, American-proved, and Russian-worn, this watch represents a pinnacle in space collecting.