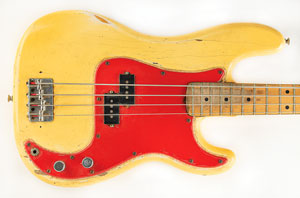 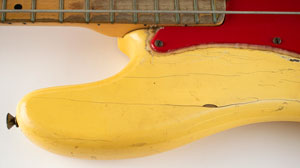 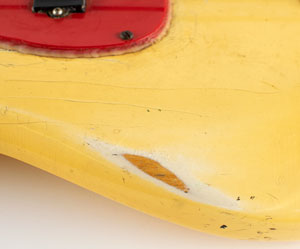 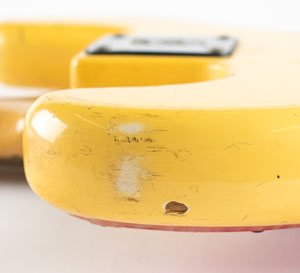 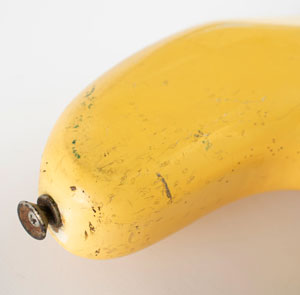 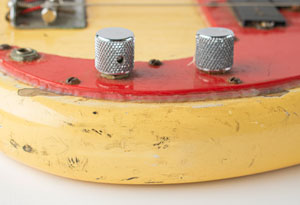 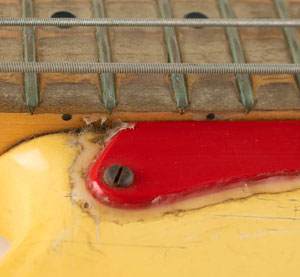 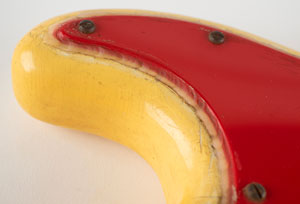 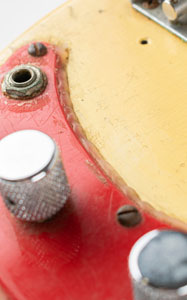 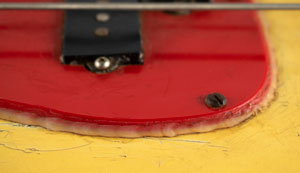 Dee Dee Ramone’s personally-owned and stage-used cream-colored Fender Precision Bass, serial number 634080 (1975), with nickel tuning pegs, clear caulking to periphery of red pickguard, and adhesive remnants to neck plate; Ramone numbered the bass guitars he brought on tour in order of preference, taping ‘1’ to his main bass, a ‘2’ to his backup and tuning bass, and a ‘3’ to an ‘emergency’ bass he used as a fail-safe in the event something tragic happened to the first two options. Photo evidence and ample research by Chris Lamy, close friend and historian of the Ramones, indicates that this is in fact Dee Dee's No. 1 bass. In very good to fine condition, with obvious expected signs of heavy use, including: some area of paint loss, as well as chipping and crazing to the body.

Accompanied by a detailed letter of provenance from Lamy, which reads:

"My name is Chris Lamy and I was a personal friend of The Ramones. This white, Fender Precision Bass serial number 634080 was manufactured in 1975 and owned and used by Dee Dee Ramone from 1979 though 1989. The bass was one of three white Precision basses used by Dee Dee onstage between 1979 and mid 1982 when new basses were purchased. Dee Dee continued to use the bass for recording until 1989.

Each of Dee Dee’s three basses used between 1979 and 1982 were unique and distinct from each other with nuances to their headstock decals, years of manufacture, and pick-up configurations. Upon purchase in 1979, all three basses had their original black pick guards removed and replaced with red ones. According to longtime Ramones guitar tech Matthew 'Little Matt' Lolya, who replaced and caulked the pick guards, it was done because Dee Dee wanted 'to be different.'

The pick guards were caulked to prevent the electronics shorting out from Dee Dee’s profuse sweating during performances. The caulking remains on this bass and upon inspection the electronics appear to be working. This bass was Dee Dee’s primary/number one and his favorite bass during those years for stage use and recording. Dee Dee liked the bass so much that he kept this bass when new basses were purchased in 1982.

The bass can be seen in numerous Ramones online videos. The wear is indicative of it being his primary bass. This bass has a distinctive mark on the back of the neck, which can be matched to the bass being Dee Dee’s primary and used at a sound check in Rome on YouTube at the 58-59 second mark. Primary/number one instruments were used for sound checks.

After receiving new gear in mid-1982, this bass was stored and used by Dee Dee at Underground Studios in Long Island where Dee Dee used the bass to record his demo submissions for Ramones consideration. When Dee Dee left the band in 1989, the bass was sold to the studio owner to 'cleanse himself' of the band. I can say with certainty this bass was Dee Dee’s number one bass and used during the years mentioned."

As a tribute to Dee Dee and his devotion to the Fender Precision bass, in late December 2013, at the ‘Dee Dee Ramone Exhibition’ at New York City’s Hotel Chelsea, Fender introduced the Dee Dee Ramone Signature Precision Bass guitar, an Olympic white version of the instrument offered here and the bass guitar Dee Dee famously played with the Ramones. With his wiry frame, restless energy, and trademark shouts of ‘1-2-3-4,’ Dee Dee helped define the look and sound for countless generations of punk and hard rock musicians. Fender Precision basses personally–played and –owned by Dee Dee Ramone are extremely rare, with only three documented examples having ever been offered—an incredible, museum-quality keepsake used by a true punk pioneer.