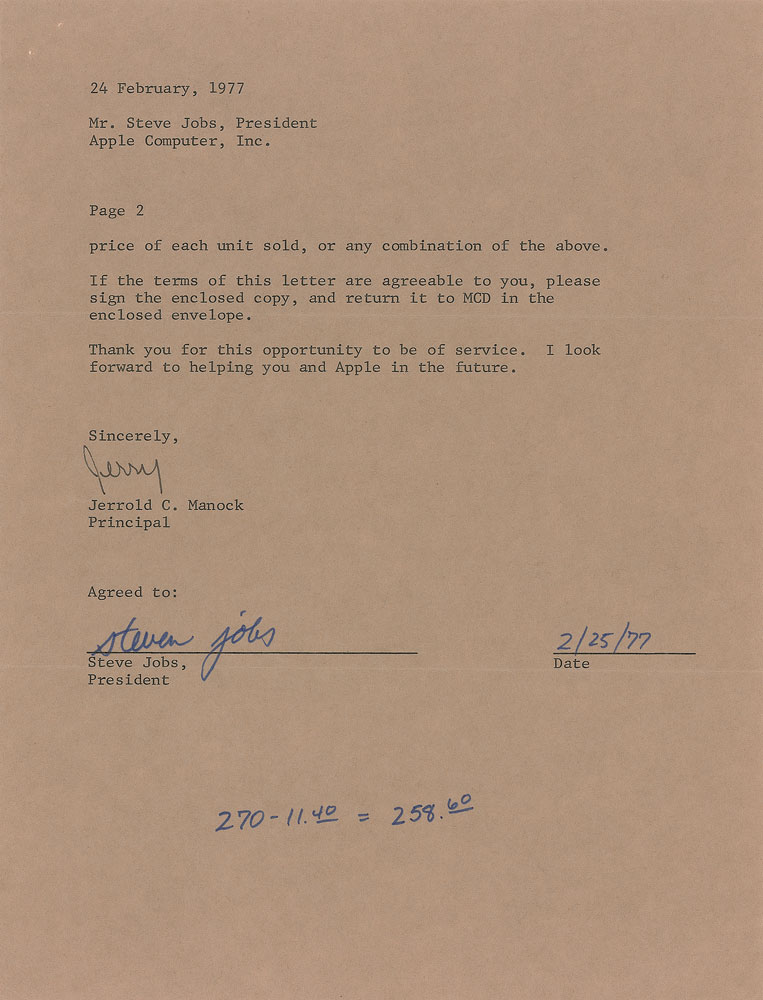 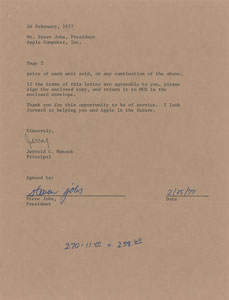 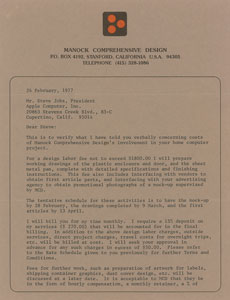 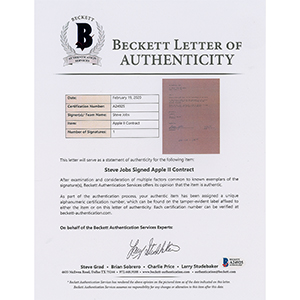 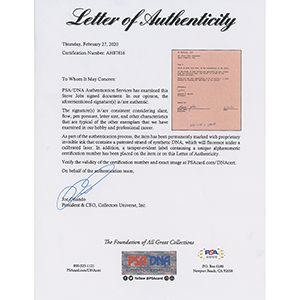 Previous Lot
Next Lot
This lot has closed
Estimate: $35000+

Historic DS, signed “steven jobs,” two pages, 8.5″ x 11″, MCD letterhead, February 25, 1977. Cost quote document submitted to Apple President Steve Jobs by Jerrold C. Manock on February 24, 1977, concerning product design engineering work associated with the Apple II. In part: "This is to verify what I have told you verbally concerning costs of Manock Comprehensive Design's involvement in your home computer project. For a design labor fee not to exceed $1800.00 I will prepare working drawings of the plastic enclosure and door, and the sheet metal pan, complete with detailed specifications and finishing instructions. This fee also includes interfacing with vendors to obtain first article parts, and interfacing with your advertising agency to obtain promotional photographs of a mock-up supervised by MCD. The tentative schedule for these activities is to have the mock-up by 28 February, the drawings completed by March 9, and the first articles by 13 April. I will bill you for my time monthly. I require a 15% deposit on my services ($270.00) that will be accounted for in the final billing. In addition to the above design labor charges, travel costs for overnight trips, etc. will be billed at cost…Fees for further work, such as preparation of artwork for labels, shipping container graphics, dust cover design, etc. will be discussed at a later date. It is acceptable to MCD that they be in the form of hourly compensation, a monthly retainer, a % of price of each unit sold, or any combination of the above. If the terms of this letter are agreeable to you, please sign the enclosed copy, and return it to MCD in the enclosed envelope." Signed at the conclusion by Jobs to approve the deal, "steven jobs," adding the date, "2/25/77." Below, Jobs adds a notation apparently pertaining to the deposit, "270 - 11.40 = 258.60." In fine condition. Accompanied by full letters of authenticity from PSA/DNA and Beckett Authentication Services.

Manock recalls: "In early February, 1977, shortly after I started my Product Design Engineering consulting company, Manock Comprehensive Design, I got a voicemail call from Steve Jobs asking me to meet him at the upcoming Home Brew Computer Club meeting at the Stanford Linear Accelerator Auditorium. When I arrived he was already in a discussion with probably 4 or 5 people and was going around the circle carrying on alternative conversations about different topics. I thought that this was very unusual and showed a great memory. When I eventually spoke to him he said that he wanted me to quote on a design for a packaged Apple I computer that would stand out as a mass-produced product from the existing computer offerings that looked like low-volume hobby 'kits.' The next day I reviewed his very aggressive schedule and prepared this original quote letter. He wanted multiple units demonstrated at the West Coast Computer Faire in April, 1977. My quote for design labor for this work was not to exceed $1,800, to have a cardboard mockup in four days, to have production drawings done by 9 March, and to deliver 'first articles' by 13 April. He agreed to these terms on 25 February, 1977 and signed and returned the letter to me.

We met the deadline by finding a vendor in San Jose, CA, that used the reaction injection molding (RIM) process with wooden tooling. Unfortunately this crude tooling produced parts that were full of holes and bubbles and had significant warping. This meant that the voids had to be filled with auto body putty and the parts individually sanded before painting. The dozen or so Apple II’s that were shown at the WCCF in San Francisco looked, for all intent, like they had rolled off a production line that could produce thousands per month. In actuality, the lid from one would not fit on the body of another. But the desired 'illusion' was noted by all looking at the Apple display, which included the colorful Apple II posters [see lot 6017]. Eventually Apple was forced to secretly second-source the Apple II RIM parts to Tempress, Inc. (Bob Rudiman, Manager) in Seattle, WA, who used aluminum tooling, thus allowing many more units to be made per month at a significantly lower cost." From the collection of product design engineer Jerrold C. Manock, and accompanied by a letter of provenance signed by Manock.