The first flight-configured Lunar Overshoe, S/N 029, used in training for the Apollo 11 mission 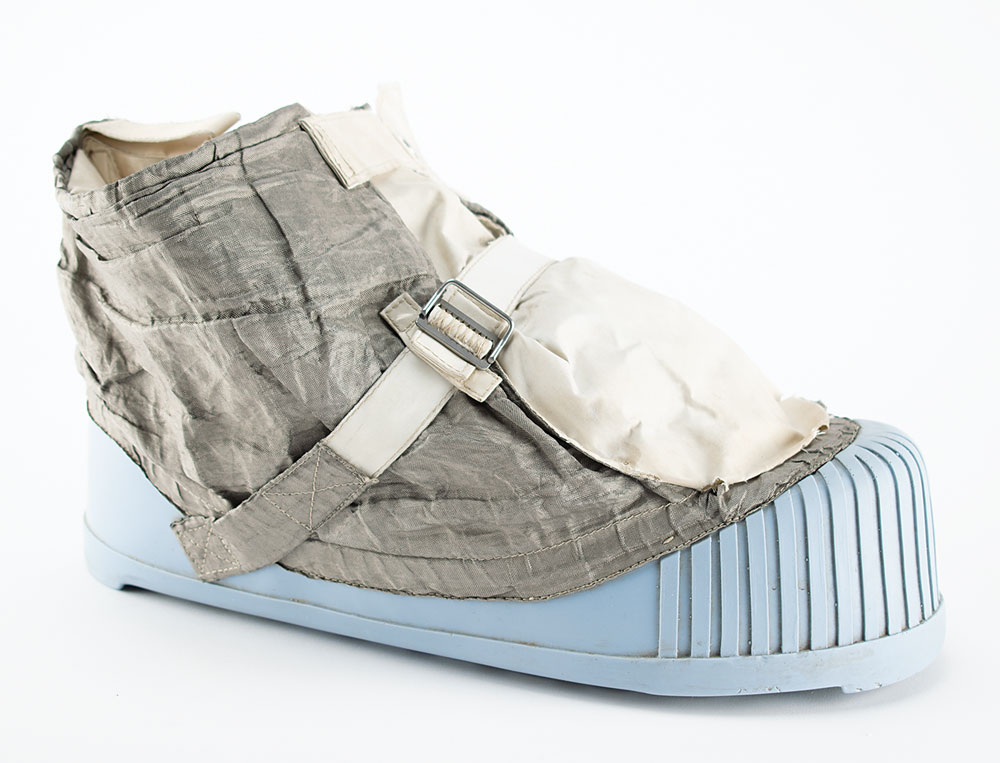 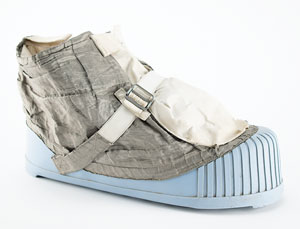 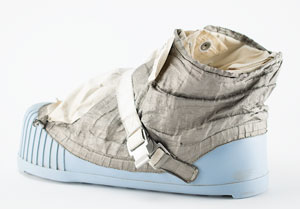 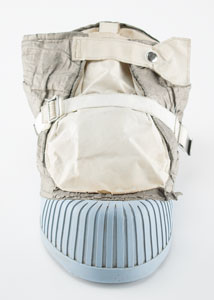 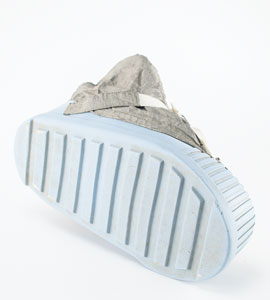 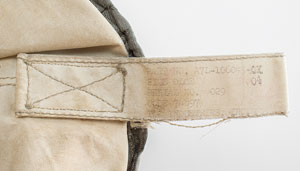 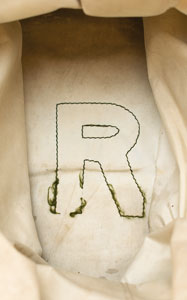 Previous Lot
Next Lot
This lot has closed
Estimate: $55000+

The first flight-configured Lunar Overshoe, S/N 029, used in training for the Apollo 11 mission

Extremely rare Apollo A7L Lunar Overshoe manufactured by International Latex Corporation (ILC) in Dover, Delaware, and used for Apollo 11 evaluation and training exercises by NASA Engineer/Test Subject Jackie Mays in late June 1969. The boot measures approximately 7.5″ inches tall, 14″ inches long, and 6.25″ inches wide, and is constructed of Chromel-R outer fabric, with the liner and insulation comprised of varying layers of Kapton, aluminized Mylar, nonwoven Dacron, Teflon-coated Beta cloth, and Nomex felt. The overshoe’s ribbed sole is made of light blue silicone rubber designed to increase thermal insulation qualities, provide lateral rigidity, and to provide traction on the lunar surface; the ribs were also spaced so as to fit the rungs of the lunar module's ladder. Features of the overshoe include a donning strap, a pair of inner snap fasteners, an upper strap with snap fastener, and an adjustment strap with buckle. In fine condition, with expected light wear.

Of considerable importance is the Beta cloth donning strap to heel, which is marked as follows: “Part No. A7L-106043 04, Size OLCE, Serial No. 029, Code 74897, ILC Industries, Inc.” Of the 60 pairs of lunar boots made, those bearing serial numbers 001-028 were designed with two upper snaps and used for early training. In 1968 the design was changed to include an upper strap, and the first overshoe to implement the upgraded support was denoted as S/N 029, a distinction that makes this offered right-foot overshoe one-half of the first pair to be made in the configuration used for Apollo 11 and beyond. The ‘S/N 029’ overshoe, as well as subsequent units, was identified as a flight unit, which, consequently, makes this the first flight configuration overshoe ever made.

Research indicates that the ‘029’ boots were allocated to space suit S/N 039, which was specifically built and tailored for storied NASA test subject Jackie Mays, and was one of two suits ILC created for evaluations; after the evaluation process, these boots were green-lighted for training usage. The addition of a top strap was significant to the development of the Apollo lunar boot: the initial 28 pairs, which only had the two top snaps inside of the Chromel-R, were deemed unreliable by astronaut Buzz Aldrin, who during training for Apollo 11 discerned that the slightest snag resulted in the top snaps coming undone. The improved ‘029’ boots, used in conjunction with suit 039 to carry out lunar qualification testing in late June 1969, helped determine that the suit system, including the boots, would work on the Apollo 11 mission.

Accompanied by a detailed letter of authenticity from ILC historian Bill Ayrey.

Worn by NASA astronauts for Project Apollo, the three manned Skylab flights, and the Apollo-Soyuz Test Project between 1968 and the close of the Apollo program in 1975, the A7L suit was the seventh Apollo space suit designed and built by ILC Dover. The A7L suit followed up on the initial designs of the A5L and the A6L suits, which introduced the integrated thermal and micrometeroid cover layer. After the deadly Apollo 1 fire, the suit was upgraded to be fire-resistant and was then given the designation of A7L, with this historic training-used overshoe representing the first flight-configured example deemed capable for a lunar-landing EVA.