Governor Jefferson calls upon his fellow statesmen, intent on "recovering the public arms" for the local militia 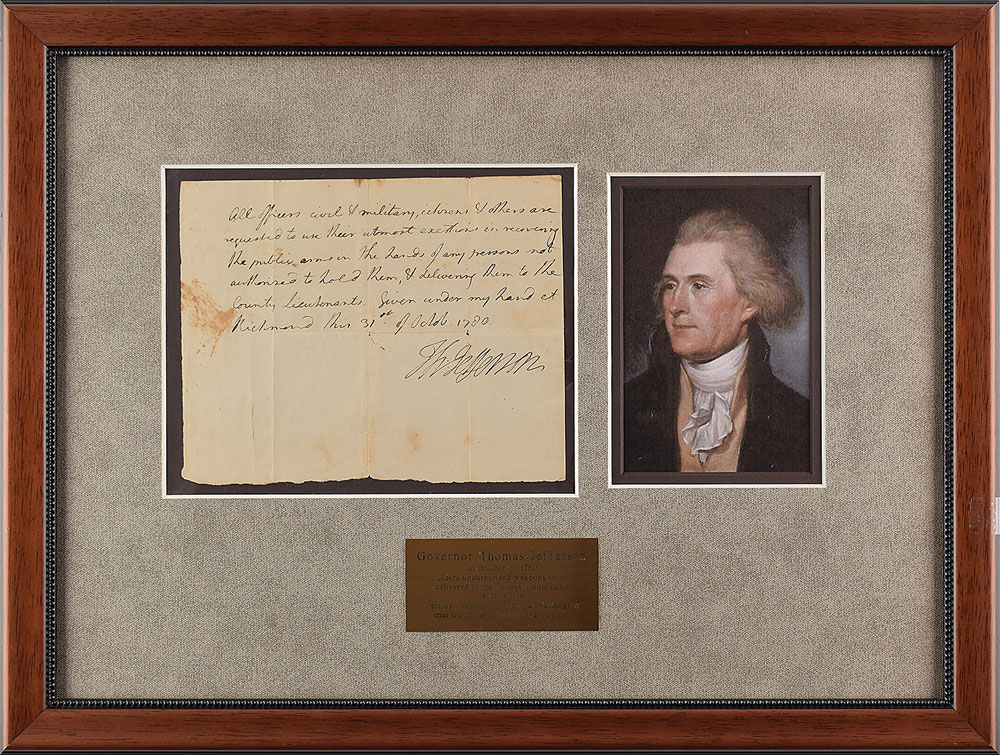 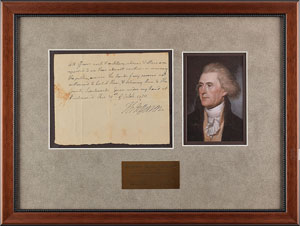 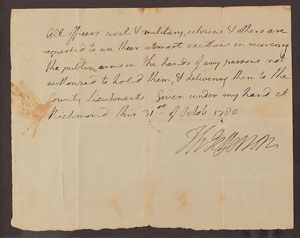 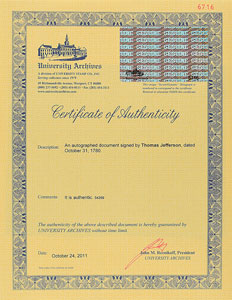 Governor Jefferson calls upon his fellow statesmen, intent on "recovering the public arms" for the local militia

Revolutionary War-dated ADS as governor of Virginia, boldly penned and signed by Jefferson, “Th: Jefferson,” one page, 8 x 6.25, October 31, 1780. In full: "All officers civil and military, citizens & others are requested to use their utmost exertions in recovering the public arms in the hands of any persons not authorized to hold them, & delivering them to the County Lieutenants. Given under my hand at Richmond this 31st of Octob. 1780." Signed prominently at the conclusion by Jefferson. Cloth-matted and framed with a portrait and plaque to an overall size of 20.75 x 15.5. In very good to fine condition, with intersecting folds and light stains. Accompanied by a certificate of authenticity from University Archives.

In October 1780, the arrival of 2,500 British troops along the Virginia coast formally ended the state’s prolonged stretch of military inactivity during the Revolutionary War. Led by Brigadier General Alexander Leslie, the British Army soldiers established a fortified position at Portsmouth and soon began raiding the area for supplies. Six days before penning the offered document, Jefferson wrote an impassioned letter to Congressional President Samuel Huntington, pressing firm the issue of a more well-prepped and well-armed defense:

‘Since my last informing of you of the appearance of an enemy’s fleet they have landed 800 men in the neighbourhood of Portsmouth and some more on the bay side of Princess Anne County. On the 23d. in the morning they landed 1000 infantry and 100 cavalry at Newport’s News who immediately took possession of Hampton. The horse were proceeding up the road at the time of our last intelligence. The residue of their force remains still on board. The unarmed state of the people leaves it not in our power to say precisely when one hundred horse will be stopped. The few who have arms have turned out with the greatest alacrity, but they are not of a nature proper to oppose horse. Such a corps as Major Lee’s would now be of infinite value to us.

Our cartridge paper has been nearly exhausted by the Southern army, and 2000 Cartouch boxes which we had bought in Baltimore we have reason to believe were on their way down the bay when the enemy came in and have probably fallen into their hands. The want even of these small articles will be of great disadvantage. The spirit which has shown itself among the people on this occasion has given me the greatest pleasure, but I must notwithstanding assure you Sir that if great supplies of arms are not immediately sent on there is no event which may not be expected.’

Excellent Revolutionary War content written during a tense time after the British invaded Virginia, where one year later Washington would defeat Cornwallis at Yorktown. Having already authored the Declaration of Independence, Jefferson would go on to be the first secretary of state, second vice president, and third president of the United States.