Buchanan the 'doughface' seeks Southern support during his 1852 campaign 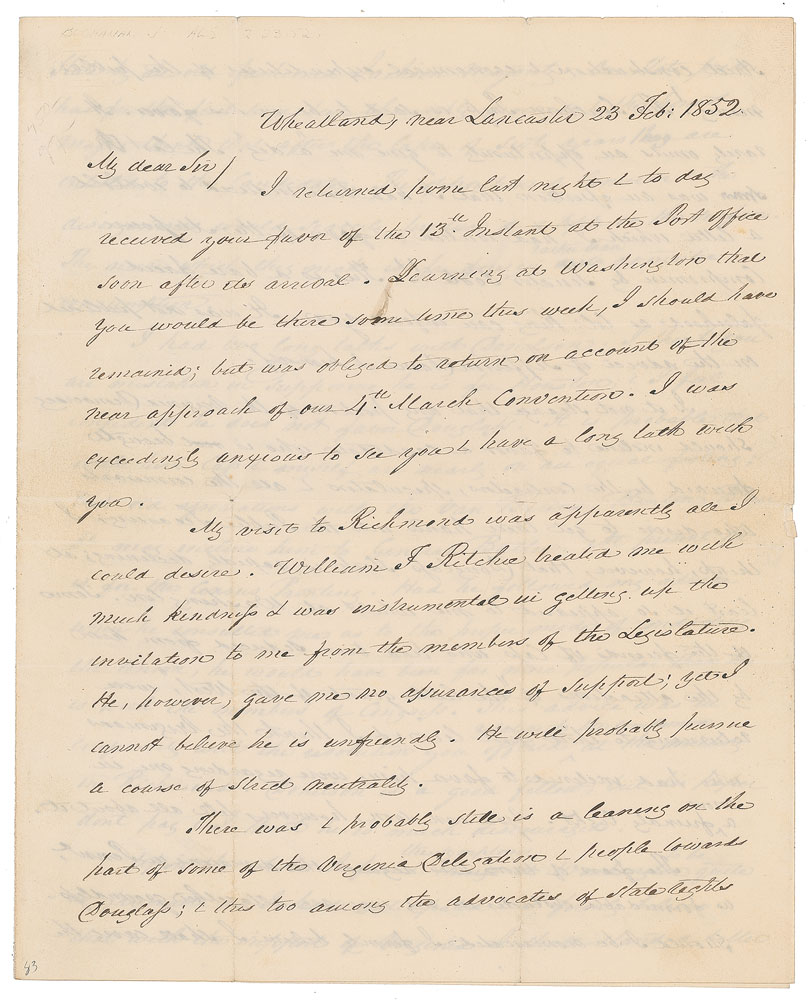 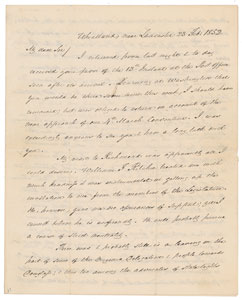 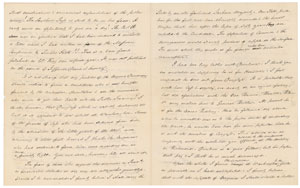 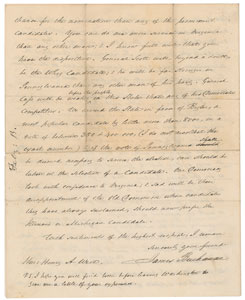 Buchanan the 'doughface' seeks Southern support during his 1852 campaign

ALS, four pages on two adjoining sheets, 8 x 10, February 23, 1852. Lengthy letter to Virginian statesman Henry A. Wise, in full: "I returned home last night & today received your favor of the 13th. Instant at the Post Office soon after its arrival. Learning at Washington that you would be there some time this week, I should have remained; but was obliged to return on account of the near approach of our 4th. March Convention. I was exceedingly anxious to see you & have a long talk with you.

My visit to Richmond was apparently all I could desire. William F. Ritchie treated me with much kindness & was instrumental in getting up the invitation to me from the members of the Legislature. He, however, gave me no assurance of support; yet I cannot believe he is unfriendly. He will probably pursue a course of strict neutrality.

There was & probably still is a leaning on the part of some of the Virginia Delegation & people towards Douglass; & this too among the advocates of state rights, strict construction & economical expenditures of the public money! The Southern press is said to be in his favor. It rarely omits an opportunity to give me a ‘dig.’ The last was an assertion that I had been induced to withhold a letter which I had written in favor of the Missouri Compromise by Senator Foote!! This is a bare faced falsehood as Col. King can inform you. It was not published on the advice of Jefferson Davis & himself.

It is not strange that any portion of the Virginia Democracy should incline to favor a candidate who is brought forward by the contractors, speculators & all the cormesants who desire to get their hands into the Public Treasury? I think, however, that Douglass stock is rapidly declining; at least it so appeared to me whilst at Washington. Some of the friends of Cass who had been seduced from him by the attraction of ‘the little giant of the West’ were returning to their first love: & I think the Virginians who had inclined to favor him were regarding me in a more friendly light. You can soon, however, tell all about it.

The fears of those who regard the division on Penn’a as formidable obstacles in my way are altogether groundless. Should I be nominated I firmly believe I shall carry the State by an old fashioned Jackson majority. Our State pride has for the first time been thoroughly aroused & the honest masses think that after the lapse of sixty years they are entitled to the candidate. The opposition of Cameron and the disorganizers would scarcely produce a ripple on the surface. The noise of which they make is for foreign rather than domestic consumption.

I had two long talks with Donelson. I think you are mistaken in supposing he is for Houston; & I feel confident he does not favor Douglass. It is probably that with him Cass and myself are nearly on an equal footing; but old associations with the Van Burens, Benton, Blair, etc. may incline him to General Butler. At present he is for the Census Printing. Had he followed my advice when he consulted me as to the proper mode of conducting the Union, he would have been far more popular than he is with the members of Congress. This advice was in conformity with the resolution you offered relative to the compromise at the meeting in Richmond. Donelson is a good fellow; but his paper don’t pay & I think he is much discouraged.

Upon the whole I found the symptoms at Washington to be quite favorable as I had anticipated & I firmly believe that with the support of Virginia I shall stand a better chance for the nomination than any of the prominent candidates. You can do me more service in Virginia than any other man; & I know full well that you have the disposition. General Scott will, beyond a doubt, be the Whig candidate; & he will be far stronger in Pennsylvania than any other man of his party. General Cass will be weaker before the people in this State than any of his Democratic competitors. We carried the State in favor of Bigler, a most popular candidate by little more than 8000, in a vote of between 350 & 400,000 (I do not recollect the exact number) & if the vote of Pennsylvania shall be deemed necessary to secure the election, care should be taken in the selection of a candidate. Our Democracy look with confidence to Virginia; & sad will be their disappointment if the Old Dominion whose candidates they have always sustained, should no prefer the Illinois or Michigan candidate.” Buchanan adds a brief postscript: “I hope you will find time before leaving Washington to give me a little of your experience.” In fine condition.

During his campaign for the 1852 Democratic presidential nomination, Buchanan sought the support of influential officials like Virginia delegate Henry Wise in an attempt to curry Southern favor. In this insightful letter, Buchanan posits his thoughts and chances against popular opponents like “the little giant of the West,” Illinois Senator Stephen A. Douglas, Texas Senator Sam Houston, and Michigan Senator Lewis Cass, who won the Democratic nomination in 1848. When the Democratic National Convention assembled in the first week of June, Buchanan and Cass battled to near even votes until New Hampshire’s Franklin Pierce, brought aboard as a compromise choice on the 35th ballot, seized the nomination with a wave of Democratic support. A rare and early handwritten letter from Buchanan during his first run at the presidency.