President Lincoln seeks assignment for the hero of Fort Sumter 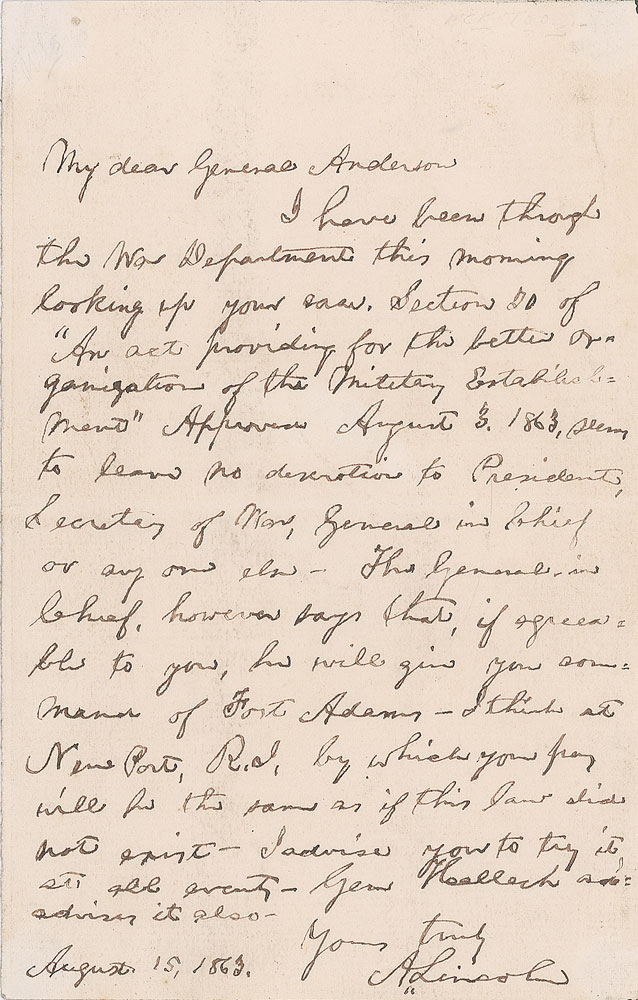 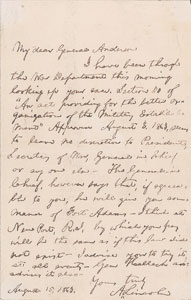 President Lincoln seeks assignment for the hero of Fort Sumter

Civil War-dated ALS signed “A. Lincoln,” one page, 4.5 x 7, August 15, 1863. President Lincoln writes to General Robert Anderson, who had commanded Fort Sumter at the beginning of the Civil War and who was now in ill health, in full: "I have been through the War Department this morning looking up your case. Section 20 of 'An act providing for the better organization of the Military Establishment' Approved August 3, 1863, seems to leave no discretion to President, Secretary of War, General-in-Chief, or any one else. The General-in-Chief, however says that, if agreeable to you, he will give you command of Fort Adams—I think at New Port, R. I. by which your pay will be the same as if this law did not exist. I advise you to try it at all events. Gen. Halleck advises it also." In fine condition.

The subject matter of this private letter is nearly identical to another sent by Lincoln to Anderson from the Executive Mansion on the very same date, with only the closing of the ‘official’ letter differing in content, which reads as follows: ‘Gen. Halleck says it will require substantially no labor, or thought, whatever. Please telegraph whether you conclude to try it. And now, my dear General allow me to assure you that we here are all your sincere friends.’ The Section 20 of which Lincoln cites affirmed that officers 'absent from appropriate duties for a period exceeding six months, either with or without leave, shall not receive the allowances for servants, forage, fuel, quarters & transportation of baggage, either in kind or in communication.'

General Anderson, who had been awaiting orders since October 8, 1861, was assigned to the command of Fort Adams only days later on August 19, 1863, but was retired on October 27 for 'for Disability resulting from Long and Faithful Service, and Wounds and disease contracted in the Line of Duty'. Although officially retired, Anderson continued to serve on the staff of the general commanding the Eastern Department, headquartered in New York City, until January 22, 1869.

Anderson died at the age of 66 in Nice, France, on October 26, 1871, having traveled to Europe with his wife in search of a cure for his aggravated health. Anderson’s poor immune system and physical limitations originate from his participation in a handful of violent battles during the Mexican-American War, namely the Battle of Molino del Rey where he was severely wounded while assaulting enemy fortifications. Historians opine that Anderson’s poor health was the reason for his relinquishment of command of the Department of Kentucky to his secondary, Brig. Gen. William T. Sherman on October 7, 1861.

Despite being a native Kentuckian and a former slaveholder, Robert Anderson remained a staunch and fervent loyalist to the Union resolve throughout the Civil War. In November 1860, when President Buchanan and military brass gleaned that fortifications within Charleston Harbor were vulnerable, they assigned Anderson to command the region’s coastal garrison, hopeful that their placement of a Southerner in command of the forts would be perceived as a diplomatic gesture of nonhostility.

With Fort Moultrie abandoned and Castle Pinckney surrendered, Anderson covertly moved additional troops to defend the area’s foremost stronghold, Fort Sumter. After a series of requests to evacuate Sumter by South Carolinian officials and Confederate Brigadier General P. G. T. Beauregard were ignored, the Union supply steamer Star of the West was repulsed by Confederate cadets firing from the Citadel on January 9, 1861—the official first shots of the Civil War.

The Battle of Fort Sumter was fought on April 12-13, 1861, and resulted in Confederate victory following a 34-hour bombardment on Union forces. Anderson carried the Fort Sumter flag with him North, where he found himself a national hero. Less than a week later, an estimated 100,000 people gathered in Manhattan’s Union Square Park to fete Anderson and salute the 33-star flag he had rescued. The man and the flag proceeded to tour across the Northern states, recruiting military volunteers and raising funds for the war effort. On April 14, 1865, Anderson and the now-legendary Fort Sumter flag returned to Charleston for a ceremony to celebrate the war’s end and the reunification of the nation.