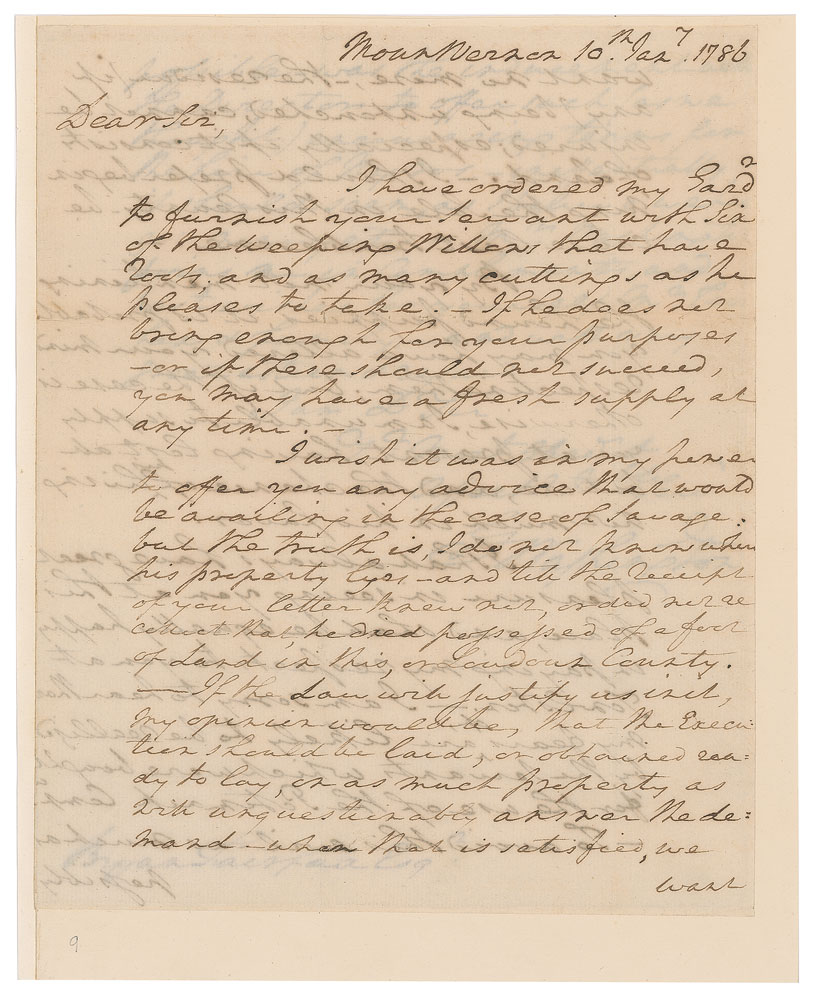 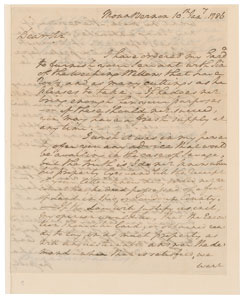 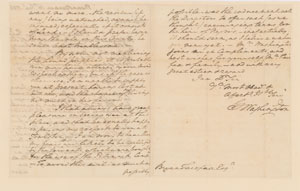 Amazing and extraordinarily well-preserved handwritten letter signed “G. Washington,” three pages on two sheets, 7.25 x 9, Mount Vernon, January 10, 1786. Letter to Bryan Fairfax, Washington’s boyhood friend and nephew of Thomas Lord Fairfax. In full: “I have ordered my Gardr to furnish your Servant with Six of the weeping Willows that have roots; and as many cuttings as he pleases to take. If he does not bring enough for your purposes—or if these should not succeed, you may have a fresh supply at any time.

I wish it was in my power to offer you any advice that would be availing in the case of Savage: but the truth is, I do not know where his property lyes—and ’till the receipt of your letter knew not, or did not recollect that, he died possessed of a foot of Land in this, or Loudoun County. If the Law will justify us in it, my opinion would be, that the Execution should be laid, or obtained ready to lay, in as much property as will unquestionably answer the demand—when that is satisfied, we want no more, the residue (if any) being untouched, cannot be injured; especially if it consists of Land. I should prefer beginning the Sale in this County—because least troublesome.

By your not mentioning the hound puppies, it is probable you may have altered your mind respecting them; but if the case is otherwise, I am unable to supply you at present, having lost all but one, and the chance of his living not much in his favor.

I shall always have great pleasure in seeing you at this place, and shall be equally happy in paying my respects to you at Towlston. I am sorry to hear that my fears, are likely to be reallized by, the Servants which were bought for the use of Potomack Comp'y. To avoid this evil—as much as possible—was the inducement with the Directors to offer such (as we thought) encouraging terms for the hire of Negros, ineffectually it should seem, as I believe we have got none yet. Mrs Washington joins me in Compliments, and best wishes for yourself, Mrs Fairfax & family.” Professionally inlaid into slightly larger off-white adjoining sheets. In fine to very fine condition, with intersecting folds and show-through from writing to opposing sides; it is truly impeccable, beautifully penned in bold ink and remaining as clean as the day it was written.

One of Washington's greatest interests in the period between the end of Revolutionary War and taking office as president of the United States was developing the picturesque Potomac River into a navigable route to the interior of the country via a series of locks and canals, and was named president of the Potomac Company to lead these efforts in 1785. Washington and the company directors had difficulty hiring a competent workforce—in September 1785 the directors decided to supplement their hired laborers and tradesmen with slaves rented from local plantations, citing frequent absenteeism and poor behavior. However, the danger posed by the work made slaveholders hesitant to rent them out—workers were injured and killed in the process, as the raging current occasionally swept a worker downstream, and the construction of locks required unsafe black-powder blasting.

A few weeks before the letter here offered, on December 20, Washington again wrote to another company official, Thomas Johnson, to alert him to the difficulties encountered in trying to rent slaves, saying: 'It is to be apprehended, notwithstanding the great encouragements which have been offered by the Directors of the Company for the hire of negroes, that we shall not succeed in obtaining them. An idea is entertained by the proprietors of them, that the nature of the work will expose them to dangers which are not compensated by the terms.' This was an ongoing issue—when George Washington took office as president of the country in 1789, Johnson assumed his role at the Potomac Company. In a 1793 report submitted to President Washington he was informed that it was 'with some difficulty we have obtained about 60 Negroes for the year'—a fraction of the amount they desired.

This outstanding letter is an example of Washington's leadership during this brief period as a private citizen, in which he still served his country with an ambitious attempt to improve its infrastructure. It also lends insight into his misguided views on slavery, as well as the difficulties of organizing and completing large public works—a challenge Washington would continue to face as the nation's leader, negotiating the complexities of the relationships between state and federal governments while shaping the role of the president of the United States.