Collection of correspondence from Merton, leading up to his mysterious death in 1968 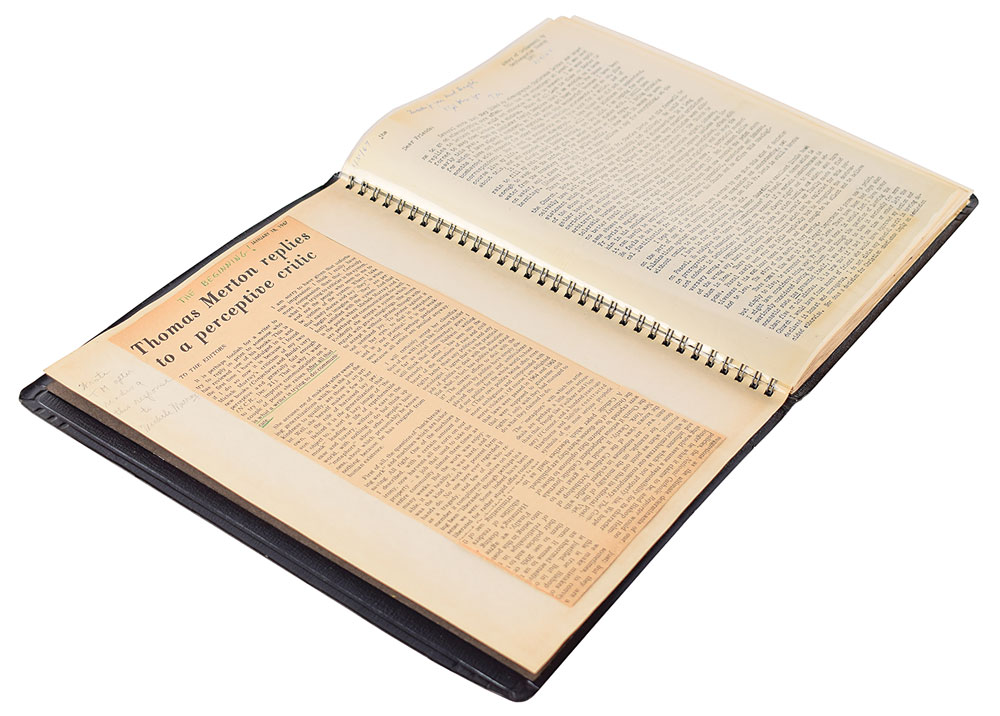 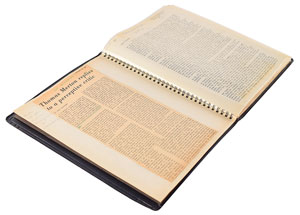 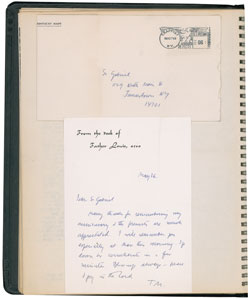 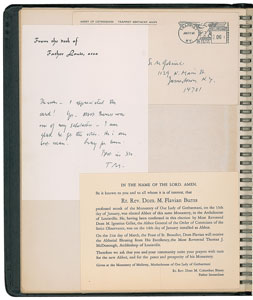 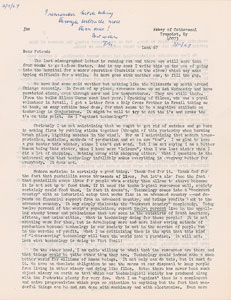 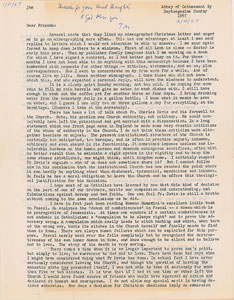 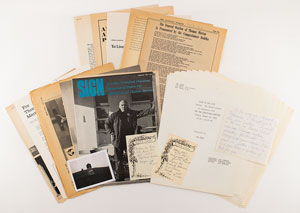 Collection of correspondence from Merton, leading up to his mysterious death in 1968

Trappist monk, writer, and mystic (1915-1968) known for his best-selling autobiography The Seven Storey Mountain. Fascinating spiral-bound scrapbook containing an array of published material relating to the thoughts and teachings of Thomas Merton, comprised of an assortment of newsletters, photos, magazine and newspaper clippings, and a handful of handwritten letters and notes, eight of which are signed with his initials, “T. M.” Highlights include a pair of ALSs, both one page, From the Desk of Father Louis stationery; the first, postmarked January 31, 1968, in full: “Thanks—I appreciated the card! Yes—Abbot Burns was one of my scholastics. I am glad he got the votes. He is our best man”; and the second, postmarked May 27, 1968, in part: “Many thanks for remembering my anniversary & the presents are much appreciated. I will remember you especially at Mass this morning.” The six other instances of Merton’s signed initials and handwriting can be found at the top of newsletters from the “Abbey of Gethsemani,” which are dated between February and December 1967. One has a facsimile signature with handwritten postscript by Merton: "P. S. Thanks for your note & enclosures!"

Also of particular note are two circulars: one from Easter 1967 that includes a formerly affixed matte-finish 2.25 x 3.5 portrait of Merton in a half-length pose with his arms crossed; although the newsletter is dated to April 1967, there’s reason to believe that the photo depicts Merton from sometime the year prior, given that he is shown wearing gloves in the image; his biographer Michael Mott only acknowledges Merton’s gloves once in his biography The Seven Mountains of Thomas Merton, noting that Merton wore dermal gloves in 1966 for a skin condition. Reverse of photo bears a stamped signature.

The second newsletter, dated Fall 1968, written from Kentucky’s Abbey of Gethsemani, is produced on paper dissimilar to the other included newsletters, and contains Merton’s last message to his followers, which bears a facsimile of his stamped autograph below. A portion of circular, written mere months before his fateful trip to Asia, in part: “I have been asked to attend two meetings in Asia, one of them a meeting of the Abbots of Catholic monastic Orders in that area, the other an interfaith meeting with representatives of Asian religions. I will also be spending some time in at least two Asian monastaries of our Order, to help out there, and will doubtless be invited to others…I feel it a duty to respond." Various pages are annotated and marked in another hand, with several additional articles and clippings laid loose at the back of the scrapbook. In overall fine condition. Consignor notes that the scrapbook derives from a relative who corresponded with Merton throughout the 1960s.

On December 10, 1968, Merton was found dead shortly after giving a talk at a Red Cross retreat center named Sawang Kaniwat in Samut Prakan, a province near Bangkok, Thailand. His body was located in his cottage, supine on the floor with a short-circuited Hitachi floor fan lying across his body, and a grievous wound on the back of his head. Given that no autopsy was performed, the head wound, ‘which had bled considerably,’ was never officially deemed a factor in Merton’s death, which, according to his associate, Jean Leclercq, was ostensibly ‘due in part to heart failure, in part to an electric shock.’ Merton’s body was flown back to the United States on board a U.S. military aircraft returning from Vietnam, and he was buried at the Gethsemani Abbey.

12. Copy of yearbook cover from June 1967 (referenced in Merton's note)

20. Clipping of a Merton letter to the editors of U.S. Catholic

21. Clipping of an interview with Merton by Thomas D. McDonnell

27. Photo clipping of a Merton poem

30. Clipping from The Catholic Worker, November 1968

32. Letter from Abbey of Gethsemani, December 19, 1968, with Merton memorial card

33. Copy of letter to Dom Flavian at the Abbey from Trappist monks reporting the circumstances surrounding Merton's death, December 11, 1968

38. Clipping of an article from December 1967, ‘Thomas Merton—His friends remember him’

43. Clipping of a CSPA Contest for College Award Winners, with an honorable mention for the poem, ‘For Thomas Merton’

45. Clipping of a U.S. Catholic magazine article from March 1972

46. Book review clipping from October 1969, ‘Last Mass in the Hermitage’

47. Clipping from The Catholic Worker, February 1969, with ‘The Funeral Oration of Thomas Merton as pronounced by the Compassionate Buddha’

48. Clipping from the National Catholic Reporter, October 1, 1969, ‘A lesson in totalitarianism, Merton on wars and confusion’