Destitute in Italy after the collapse of his financial system, Law pleads for the restoration of his finances, dismisses accusations that he is a charlatan and addresses his motivation for constructing the Mississippi Scheme, its viability and the reason for its ultimate failure 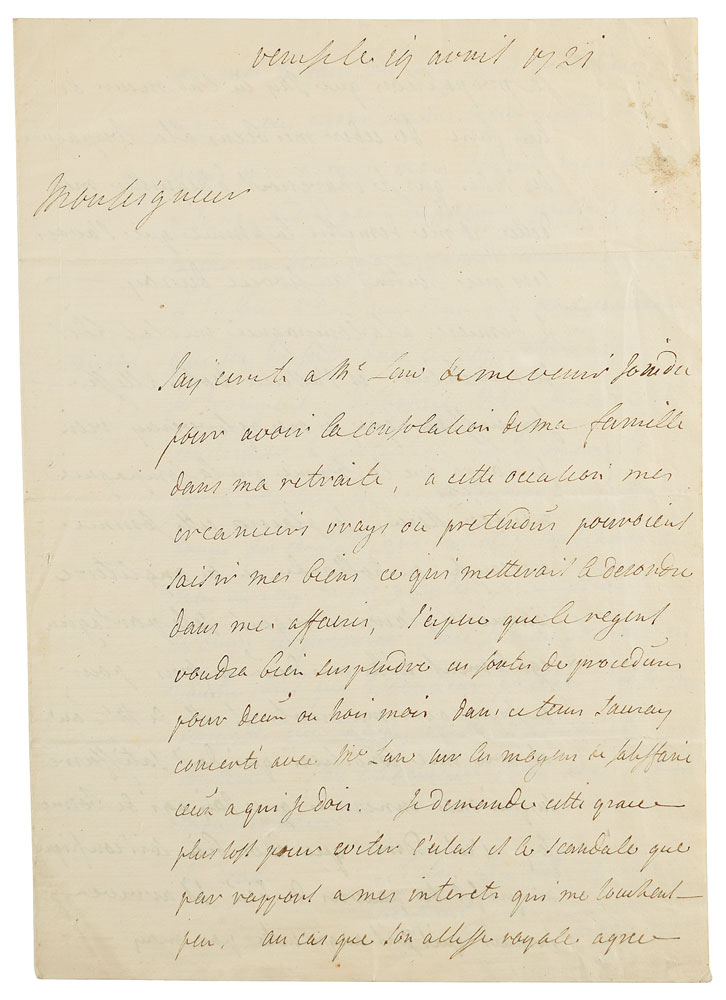 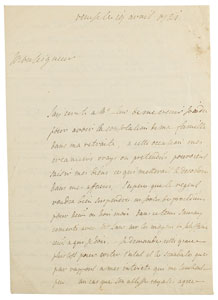 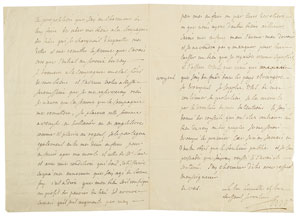 Destitute in Italy after the collapse of his financial system, Law pleads for the restoration of his finances, dismisses accusations that he is a charlatan and addresses his motivation for constructing the Mississippi Scheme, its viability and the reason for its ultimate failure

Scottish economist (1671-1729) known as a monetary reformer and as the originator of the 'Mississippi scheme' for the development of French territories in America.

Partly translated letter to an unidentified recipient, ostensibly Louis Henri, Duc de Bourbon, which notes that Law has asked his common-law wife, Katherine Knowles, and his daughter to join him in Venice [he would never see them again], ‘pour avoid la consolation de ma famile dans ma retraite,’ but he fears that his creditors, ‘vrays ou pretendus,’ will use this opportunity to seize his assets, ‘ce qui metterait le desorde dans mes affaires’; he therefore asks that the Regent [Philippe d’Orleans] suspend any legal pursuits for three months, in order to give him time to organize his affairs. Law proposes to hand over all of his holdings to the Compagnie des Indes for them to pay his debts, on the sole condition that he is restored to his financial standing at the moment he entered the French royal service, promising to give the Compagnie a full schedule of his assets, and to live scrupulously off whatever the Compagnie will accord him.

Law, with a pleading tone, assures the Duke that those who believe he has stored assets outside France are mistaken and that he deserves protection if only for his good intentions. He pens a remarkable conclusion which concisely dismisses the accusations that he is a charlatan, and addresses his motivation for constructing the Mississippi Scheme, it’s viability and the reason for its ultimate failure:

“If I gave advice which was contrary to the good of the King or the people I was the first to be deceived, as I never had any other object than the public happiness and I am persuaded that I would have succeeded if I had been given support.” ‘Si J'ay donné des conseils qui ont étés contraires au bien du Roy ou des peuples, je me serois trompé le premier, car je n'ay jamais eu d'autre objet que le bonheur public et je suis persuadé que j'auray réussi si j'avais été soutenu...’

In fine condition, with light creasing.

In the early months (and years) of his exile, Law did not abandon hope of a recall to France. Law’s system had brought its architect extraordinary wealth—in the proposals to the Regent referred above, he mentions the value of his Mississippi shareholdings having reached 100 million livres in 1720; there were widespread rumors, which Law attempts to scotch here, that he had managed to secure extensive assets outside of France, but in reality the collapse of his system ruined him and he was to live out his last years between England and Italy, dying in poverty in Venice on March 21, 1729.