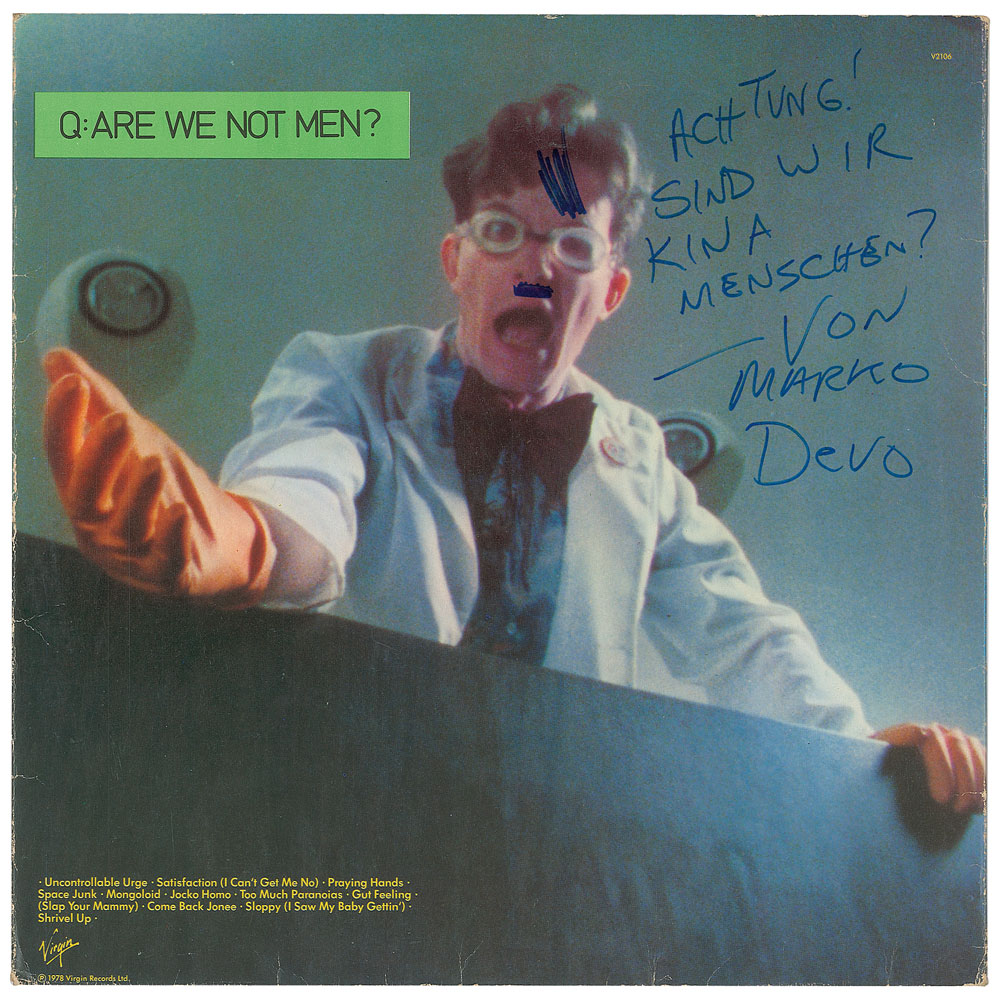 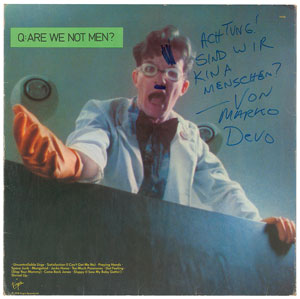 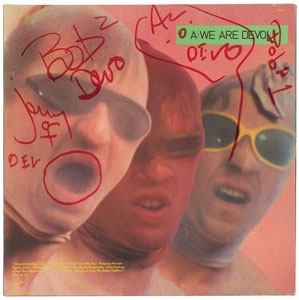 Q: Are We Not Men? A: We Are Devo! UK album with a red vinyl record, signed on the back cover in red felt tip by Jerry Casale ("Jerry of Devo"), Bob Mothersbaugh ("Bob #1"), Bob Casale ("Bob 2, Devo"), and Alan Myers ("Al, Devo"), and on the front cover by Mark Mothersbaugh ("Achtung! Sind wir kin a menschen?—Von Marko Devo") who sketches a Hitler mustache and hairdo over his own image. In fine condition. The record is included. Accompanied by a photocopy of a letter from Mark Mothersbaugh, forwarding the recording of the song 'Peek A Boo.'

The consignor notes: "In 1982 I was the associate producer of the CBS television series, Square Pegs, starring Sarah Jessica Parker and others. After a lengthy negotiation, I booked DEVO to appear in the episode, 'Muffy’s New Wave Bat Mitzvah' where they performed, 'That’s Good' as themselves. It was the highest rated episode of the season of this 8:00 pm primetime show. At the conclusion of filming on location at Excelsior High School in Norwalk, California, I asked the band to sign the cover of the 'Are We Not Men' album. It was a special UK release from Virgin Records, with Red Vinyl. Oddly, Mark Mothersbaugh signed the record’s cover in German, “ACHTUNG SIND WIR KINA MENSCHEN? - VON MARKO DEVO, and drew a Hitler moustache and hair on his own image. In 1978, Motherbaugh had written a book, 'My Struggle,' that was a satire of Hitler’s Mein Kampf and Chairman Mao’s Little Red Book. The album is signed front and back by all four original members. On February 17, 2014, Bob Casale 'Bob 2' died of a heart attack at age 61. This is a very unique piece, tied to a special moment in television and music history."