The linchpin of the complete Declaration set—Thomas Lynch, Jr. 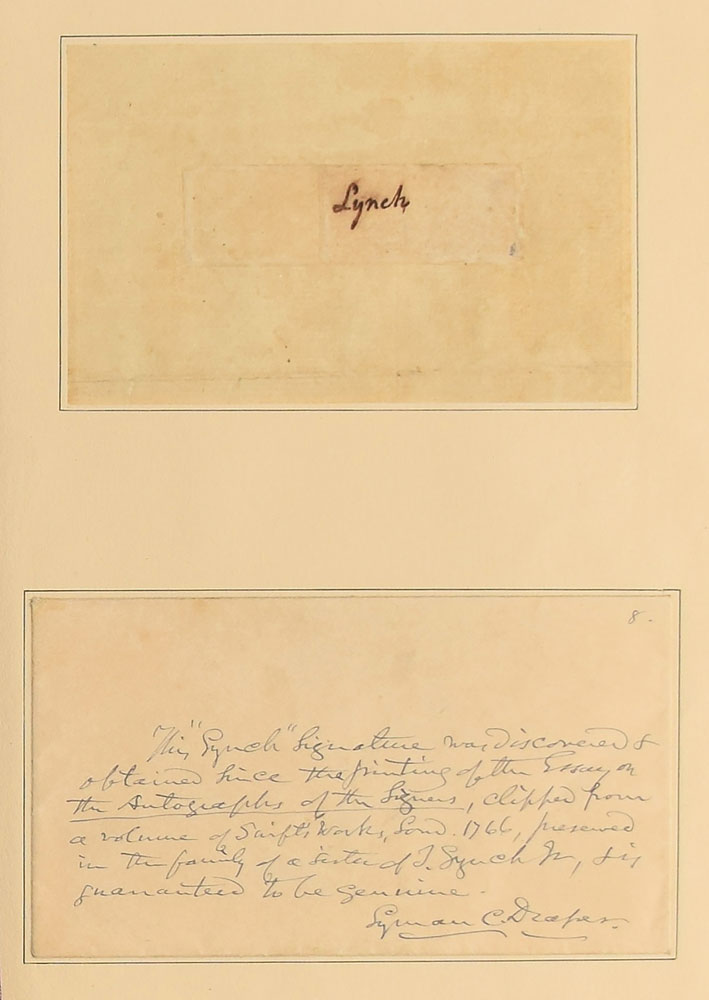 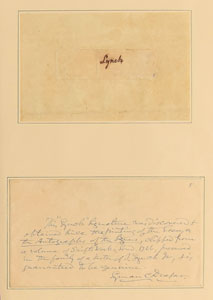 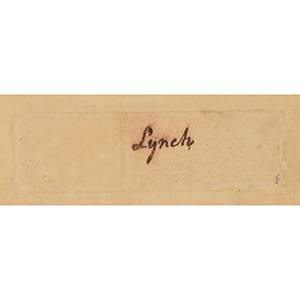 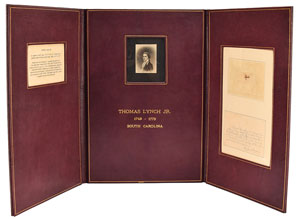 Previous Lot
Next Lot
This lot has closed
Estimate: $18000+

The linchpin of the complete Declaration set—Thomas Lynch, Jr.

Signer of the Declaration of Independence from South Carolina (1749-1779); his father had served in the Continental Congress from 1775 to 1776 but had to return home due to illness. Thomas Lynch, Jr., was chosen to take his father's place in Congress, where he voted for and signed the Declaration. In 1779, he sailed to St. Eustatius in the West Indies, but his ship was lost at sea and never found. Terrifically rare ink signature, "Lynch,” on an off-white slip affixed to a 4.75 x 3 sheet. Expertly mounted to a display sheet with an affixed handwritten letter of provenance from noted collector and historian, Lyman C. Draper, which reads: "This 'Lynch' signature was discovered & obtained since the printing of the Essay on the Autographs of the Signers, clipped from a volume of Swift's Works, Lond. 1766, preserved in the family of a sister of T. Lynch, Jr. & is guaranteed to be genuine." Impressively housed in a maroon and gilt-impressed leather folder with accompanying engraving and printed caption. In fine condition.

Lyman C. Draper (1815-1891), Director of the State Historical Society of Wisconsin, obtained a collection of clipped Lynch signatures from a descendant of Lynch between 1889 and 1891, the year of his death. Among these were a series of clipped signatures from the title pages of an eighteen-volume Works of Swift, apparently purchased by the young Lynch when he was a law student in England from 1766 to 1770.

With the rise of autograph collecting in nineteenth-century America, one of the first areas of specialization was Signers of the Declaration of Independence. Apart from the Signers' central role in American history and the unusual significance of their autographs—after all, writing their names is what ensured their immortality—obtaining all 56 represented a goal that, with a little determination, could be achieved by a resourceful collector. It quickly became evident, however, that there were two notorious ‘stoppers’ among the Signers: Button Gwinnett and Thomas Lynch, Jr. It is not entirely clear who is rarer—while Gwinnett was generally thought to be the rarest of all signers, recent studies have proclaimed Lynch as the scarcer of the two. This is an unusually bold, well-preserved example of Lynch's signature.