Warren Commission Exhibit No. 193: "Well it won't be long now until the baby is born and until we shall be seeing you" 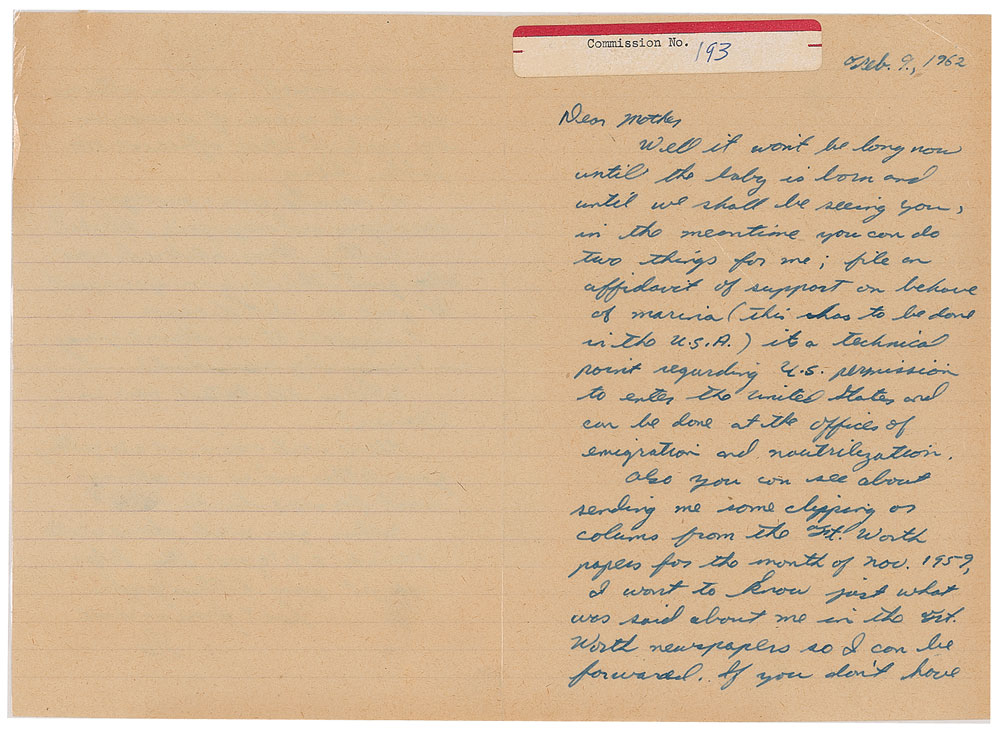 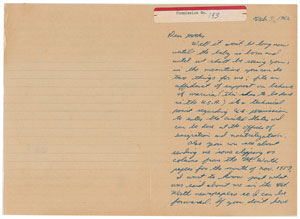 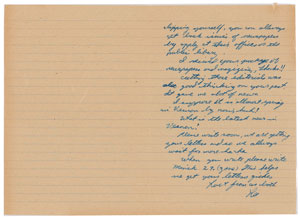 Warren Commission Exhibit No. 193: "Well it won't be long now until the baby is born and until we shall be seeing you"

ALS signed “Lee,” two pages on two adjoining sheets, 5.5 x 8, February 9, 1962. Letter to his mother, in full: "Well it won't be long now until the baby is born and until we shall be seeing you, in the meantime you can do two things for me; file an affidavit of support on behave of Marina (this has to be done in the U.S.A.) it's a technical point regarding U.S. permission to enter the United States and can be done at the offices of emigration and naturalization. Also you can see about sending me some clipping or columns from the Ft. Worth papers for the month of November 1959, I want to know just what was said about me in the Ft. Worth newspapers so I can be forwarded. If you don't have clipping yourself, you can always get back issues of newspapers by apply at their offices or the public library. I received your package of newspapers and magizines, Thanks!! Cutting those editorials was also good thinking on your part. It gave me a lot of news. I suppose it is almost spring in Vernon by now, huh? What is the latest news in Vernon? Please write soon, we are getting your letters and so we always wait for more ha-ha. When you write please write Minsk 29. (zone) This helps me get your letters quicker." The letter has been soft-laminated, as typical of official exhibits used during the Warren Commission investigation, and bears an exhibition label on the front: "Commission No. 193." In fine condition.

Less than two years after defecting to the Soviet Union, Oswald completely reversed his stance and decided to return to the States with his new, now-pregnant wife, Marina. Having secured his US Passport, Oswald was awaiting approval from the Soviet government for his and Marina's exit visas as the year came to a close. Writing to his mother, he comes across as a kind and appreciative son, grateful for magazines and newspapers she has sent, looking forward to the birth of his first child, and making plans to rejoin his family in Texas as soon as he can. The couple finally received word that their requests had been granted by Soviet authorities on Christmas Day, 1961, but still needed permission from American authorities. With an official Warren Commission label, this is a highly desirable letter written as he planned his return to the States.