Fresh off the success of the Green Hornet, Lee hopes to impress CBS "to see if my name can carry the show" 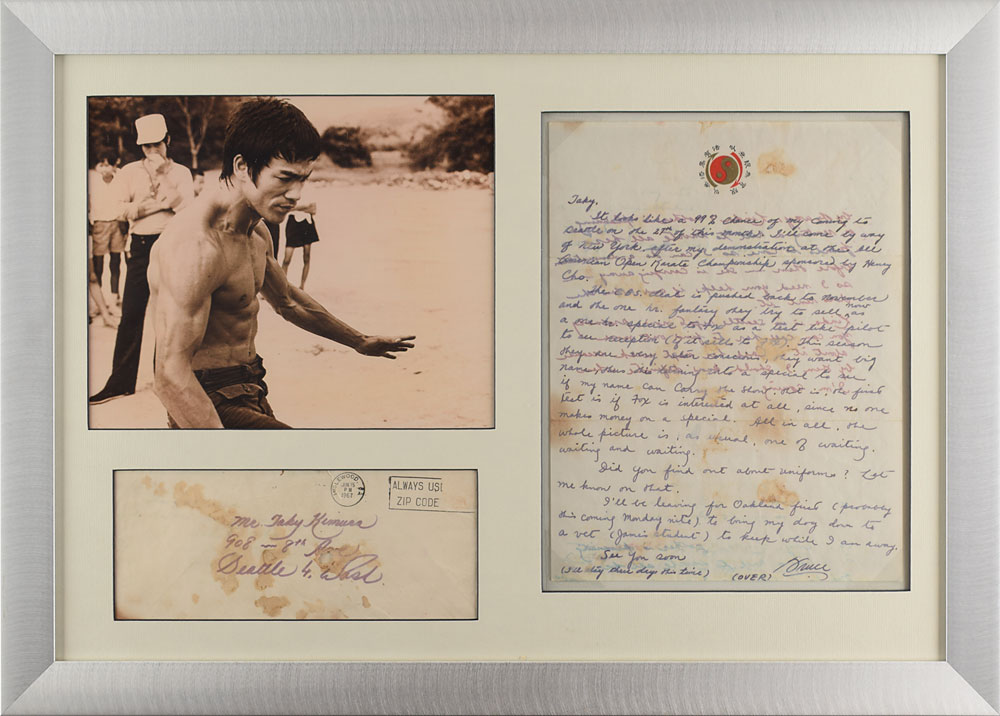 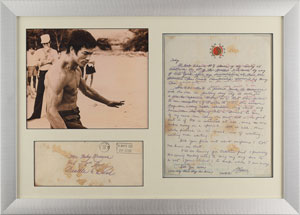 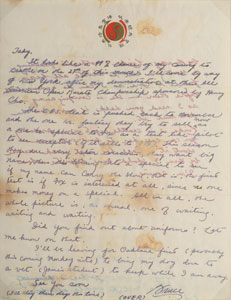 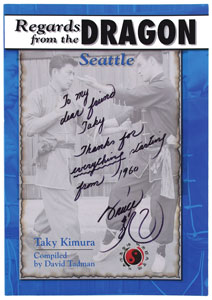 Fresh off the success of the Green Hornet, Lee hopes to impress CBS "to see if my name can carry the show"

Wonderful ALS signed “Bruce,” one page both sides, 8.25 x 11, Jeet Kune Do emblem letterhead, no date, postmarked June 15, 1967. Letter to his top student and confidant Taky Kimura, in full: "It looks like a 99% chance of my coming to Seattle on the 27th of this month. I'll come by way of New York after my demonstration at the All American Open Karate Championship sponsored by Henry Cho. The C.B.S. deal is pushed back to November and the one hr. fantasy they try to sell now as a one hr. special to Fox as a test like pilot to see reception (if it sells to Fox). This season they are very star conscious, they want big name, thus this turning into a special to see if my name can carry the show. That is, the first test is if Fox is interested at all, since no one makes money on a special. All in all the whole picture is as usual, one of waiting, waiting and waiting. Did you find out about uniforms? Let me know on that. I'll be leaving for Oakland first (probably this coming Monday nite) to bring my dog down to a vet (James' student) to keep while I am away. See you soon (I'll stay three days this time)." Lee adds a lengthy postscript on the reverse: "By the way, Linda's mother is planning on renting a hall to invite all her friends to come so I can do a demonstration before them—she is carrying away so I need your help, if and when she does rent it. Linda is in Seattle right now, probably you can call her to find out more about it. Call her next week because by then I should know definite when I'm coming." Archivally matted and framed with a photo of Lee and the original mailing envelope, addressed in Lee's own hand, to an overall size of 23.75 x 17, with a window in the backing for viewing the reverse. In very good condition, with scattered staining and soiling, slight running of the ink to a few words, and light show-through from writing on opposing sides. Accompanied by a letter of authenticity from the original recipient, in part: "This letter was written and signed by Bruce Lee, my friend and teacher who achieved fame worldwide for his martial arts prowess. This letter is historical in nature due to the fact it touches on everything from Bruce Lee's acting career to his martial arts lifestyle. During our friendship, Bruce Lee would send to me on occasion letters such as there, expressing his admiration for me as well as his friendship."

Also included is a softcover copy of Kimura's book Regards from the Dragon, which features the offered letter on pages 58-59, with images, transcription, and a description of the contents: 'Bruce always updated me on his schedule. He always made time to work in Hollywood, but also make it to Seattle to make an appearance within the class, as well as teach me things that he developed as his martial arts progressed more into the 'Jeet Kune Do' philosophy. He was very structured in what he was doing and he never forgot the other person or obligations. He also expressed to me in how different projects were coming his way after 'Green Hornet' wrapped up. Though he struggled at times after 'Green Hornet,' he always had many things to do on his plate and many wanted to work along side him too…Though this letter is in bad shape, I treasure it dearly. It was found after years and years in a box that suffered some water damage, but when I had it in my hands, those memories came back two fold.'

This item is Pre-Certified by Beckett
Buy a third-party letter of authenticity for $150.00