A contrite and introspective "Malcolm Little" petitions for penal transfer: "What reason could I have for trying to get paroled again among people in the street when I am not fit to mix even with convicts in Norfolk" 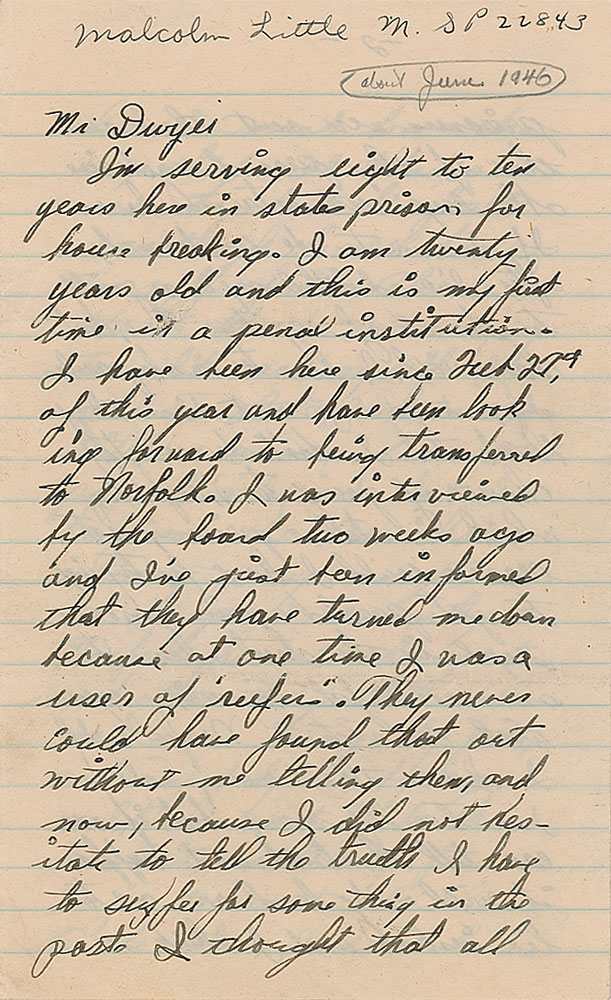 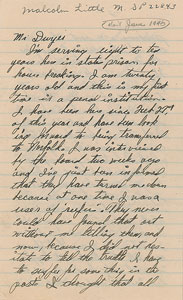 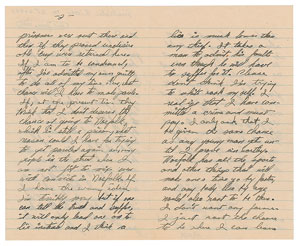 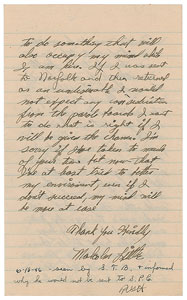 A contrite and introspective "Malcolm Little" petitions for penal transfer: "What reason could I have for trying to get paroled again among people in the street when I am not fit to mix even with convicts in Norfolk"

Very early ALS signed “Malcolm Little,” four pages on two adjoining sheets, 5 x 8, no date but circa June 1946. Letter to "Mr. Dwyer," the Massachusetts Commissioner of Corrections, written from Charlestown State Prison. Little hopes to appeal the decision of a board which denied his request to transfer to the State Prison Colony in Norfolk. His eloquence and bold reasoning skills are evident even at this early age. In full: "I'm serving eight to ten years here in state prison for house freaking. I am twenty years old and this is my first time in a penal institution. I have been here since Feb. 27th of this year and have been looking forward to being transferred to Norfolk. I was interviewed by the board two weeks ago and I've just been informed that they have turned me down because at one time I was a user of 'reefer.' They never could have found that out without me telling them, and now, because I did not hesitate to tell the truth I have to suffer for something in the past. I thought that all prisoners were sent there and then if they proved undesirable they were returned here. If I am to be condemned, after I've admitted my own guilt, to do all of my time here, what chance will I have to make parole. If, at the present time they think that I don't deserve the chance of going to Norfolk, which is still a prison, what reason could I have for trying to get paroled again among people in the street when I am not fit to mix even with convicts in Norfolk. If I have the wrong idea I'm terribly sorry but if one can tell the truth and suffer, it will only lead one on to lie instead and I think a liar is much lower than any thief. It takes a man to admit his faults even though he will have to suffer for it. Please don't think I'm trying to white wash myself. I realize that I have committed a crime and must pay. I only ask that I be given the same chance as any young man gets until I prove unworthy. Norfolk has all the sports and other things that will make one's time go by faster, and any body else by age would also want to be there. I don't want any favors. I just want the chance to be where I can leave to do something that will also occupy my mind while I am here. If I was sent to Norfolk and then returned as an undesirable I would not expect any consideration from the parole board. I want to do what is right if I will be given the chance. I'm sorry if I've taken too much of your time but now that I've at least tried to better my environment, even if I don't succeed, my mind will be more at ease." In fine condition.

Malcolm Little was found guilty of larceny and breaking and entering in 1946, and began serving his eight-to-ten year sentence at Charlestown State Prison in February. He made efforts to reform and educate himself while there, and with his sister Ella began a letter-writing campaign in hopes of getting transferred to the Norfolk Prison Colony (today known as MCI-Norfolk)—it had not only "all the sports and other things," but offered broader educational opportunities that did not exist in Charlestown. He ultimately found success, and was transferred to Norfolk on March 31, 1948. In The Autobiography of Malcolm X, he described the colony as 'comparatively, a heaven, in many respects,' observing: 'Norfolk Prison Colony represented the most enlightened form of prison that I have ever heard of. In place of the atmosphere of malicious gossip, perversion, grafting, hateful guards, there was more relative ‘culture,’ as ‘culture’ is interpreted in prisons. A high percentage of the Norfolk Prison Colony inmates went in for ‘intellectual’ things, group discussions, debates, and such.' He joined the weekly debate team, where he honed his oratorical skill, and devoted much of his time to studying in the prison library. Most importantly, it was during his sentence that Malcolm discovered the Nation of Islam. In August 1952, after seven years served, Malcolm Little left prison as Malcolm X, a devout member of the Nation of Islam and a committed disciple and pupil of Elijah Muhammad. This remarkable, incredibly early letter reveals his thought process at the start of his sentence in prison—the crucible that formed him into the outspoken leader that he would become.