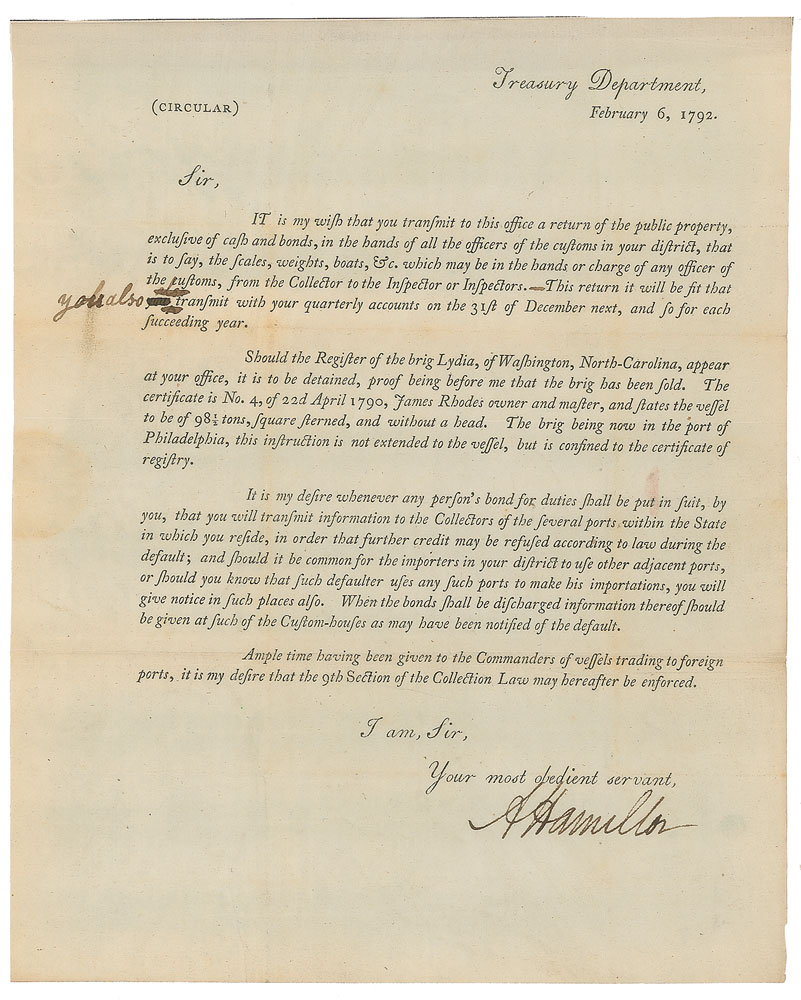 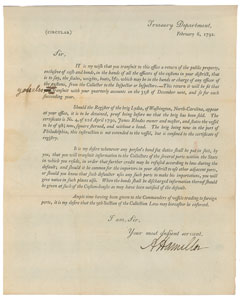 Treasury Department circular, signed “A. Hamilton,” one page, 7.5 x 9.25, February 6, 1792. Treasury Department circular issued by Secretary of the Treasury Hamilton to the collectors of customs, in part: "It is my wish that you transmit to this office a return of the public property, exclusive of cash and bonds, in the hands of all the officers of the customs in your district, that is to say, the scales, weights, boats, &c. which may be in the hands or charge of any officer of the customs, from the Collector to the Inspector or Inspectors…Should the Register of the brig Lydia, of Washington, North Carolina, appear at your office, it is to be detained, proof being before me that the brig has been sold. The certificate is No. 4, of 22d April 1790, James Rhodes owner and master, and states the vessel to be of 98 ½ tons, square sterned, and without a head. The brig being now in the port of Philadelphia, this instruction is not extended to the vessel, but is confined to the certificate of registry. It is my desire whenever any person’s bond for duties shall be put in suit, by you, that you will transmit information to the Collectors of the several ports within the State in which you reside, in order that further credit may be refused according to law during the default; and should it be common for the importers in your district to use other adjacent ports, or should you know that such defaulter uses any such ports to make his importations, you will give notice in such places also. When the bonds shall be discharged information thereof should be given at such of the Custom-houses as may have been notified of the default. Ample time having been given to the Commanders of vessels trading to foreign ports, it is my desire that the 9th Section of the Collection Law may hereafter be enforced." In fine condition, with some light staining, and light show-through from an old mounting strip along the reverse top edge.

In this significant, boldly signed circular, Hamilton requests accounts of the public property in the hands of the new nation's custom-houses and officers, discusses the disposition of the Brig Lydia, and draws attention to the enforcement of certain regulations. In requesting that the "9th Section of the Collection Law" be followed, Hamilton demands that masters of trading vessels from foreign ports have manifests of their cargo. A supremely desirable Treasury Department circular signed by the innovative founder of America's financial system, made all the more interesting by its association with foreign trade—a topic that remains a hot-button political issue today.