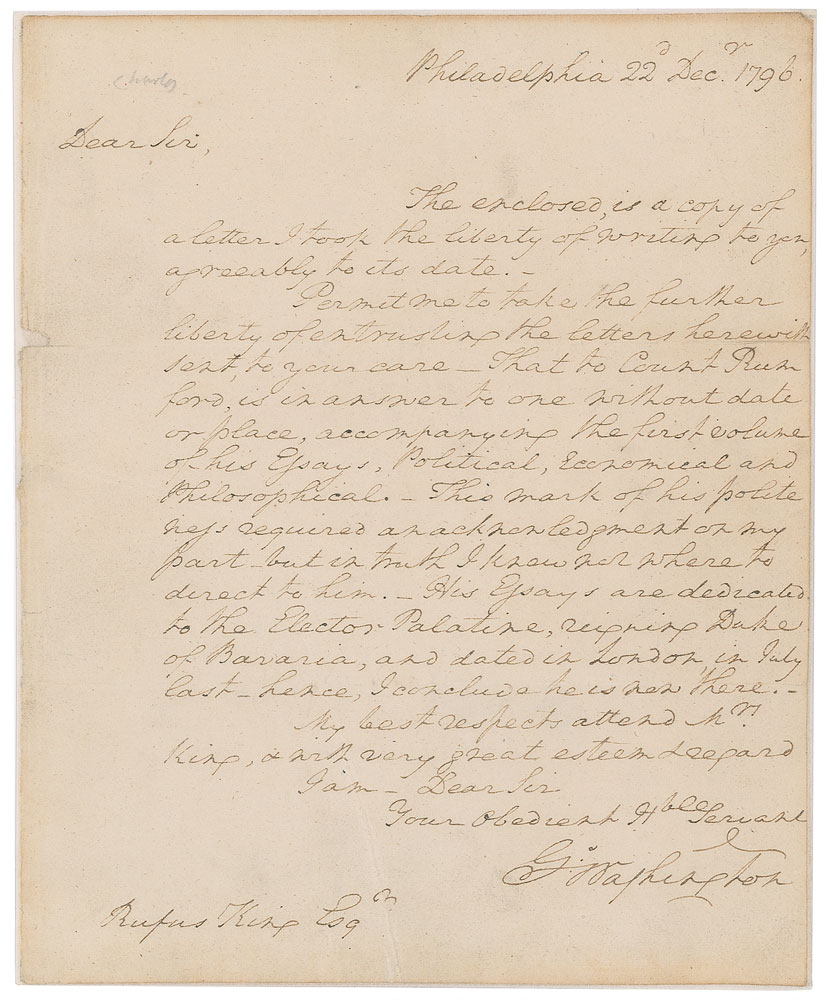 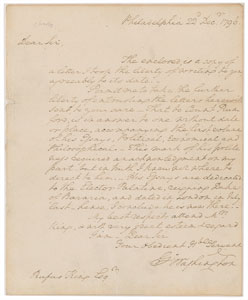 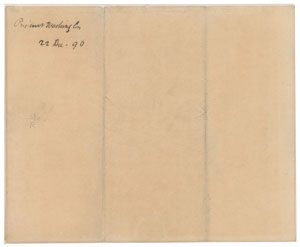 ALS as president signed “Go: Washington,” one page, 8 x 9.75, December 22, 1796. Letter to Rufus King, the United States Minister to the United Kingdom, in full: "The enclosed, is a copy of a letter I took the liberty of writing to you, agreeably to its date. Permit me to take the further liberty of entrusting the letters herewith sent to your care. That to Count Rumford, is in answer to one without date or place, accompanying the first volume of his Essays, Political, Economical and Philosophical. This mark of his politeness required an acknowledgment on my part, but in truth I know not where to direct to him. His Essays are dedicated to the Elector Palatine, reigning Duke of Bavaria, and dated in London, in July last, hence, I conclude he is not there. My best respects attend Mrs. King, & with very great esteem & regard." In fine condition, with a small chip to the left edge, and professional overall silking.

President Washington makes reference to volume of essays by Sir Benjamin Thompson, Count Rumford, an American-born physicist and inventor who had served as lieutenant-colonel of the King's American Dragoons during the Revolutionary War. After refusing a commission in the Continental Army, Thompson joined the British Loyalist forces as an advisor to both General Thomas Gage and Lord George Germain, relaying valuable information about the American troops. He saw action at Long Island and Charleston, while also conducting experiments to measure the force of gunpowder. Renowned for his scientific work, Thompson moved to Bavaria in 1785, where he helped to reorganize the army and established workinghouses for the poor. For these noble efforts, he was made Count of the Holy Roman Empire in 1791, taking the name "Rumford" to honor the New Hampshire town in which he was married.

What is most interesting about this letter is that Washington may not have realized that he aimed to acknowledge a former adversary—one who would have hanged as a traitor had he been captured. The president would have been familiar with the name Benjamin Thompson from his Revolutionary days, but the book of essays was published in London under the name 'Benjamin, Count of Rumford,' and transmitted under the name 'Rumford'—Washington may not have been aware of this Bavarian title, and thus not have made the connection between Thompson and Rumford. A fascinating and immensely desirable autograph letter from America's first president, boasting an interesting association with his heroic service in the Revolution.