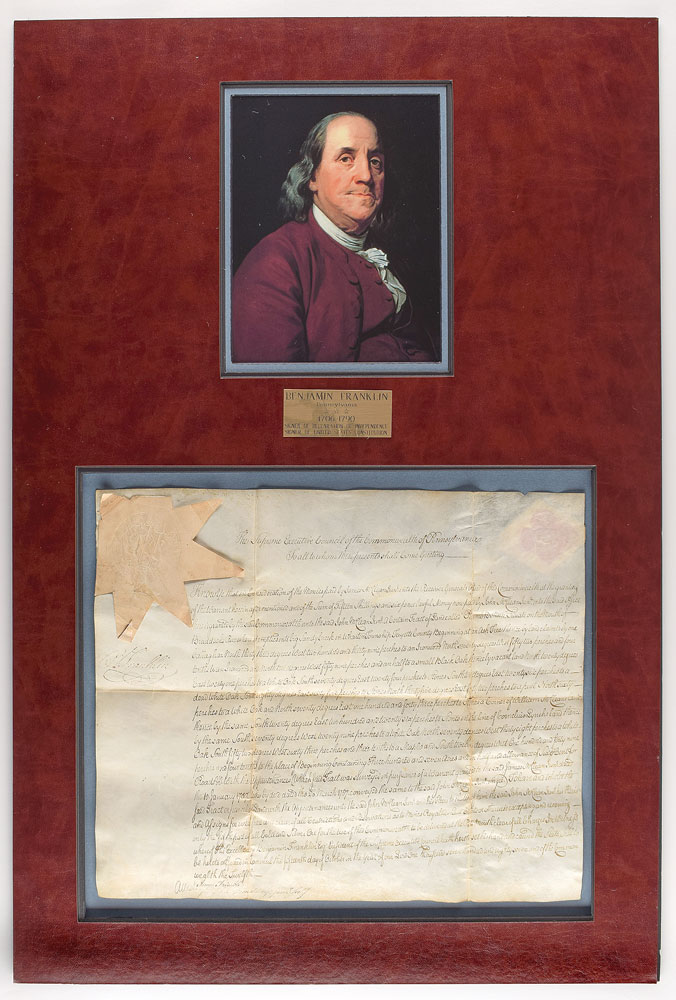 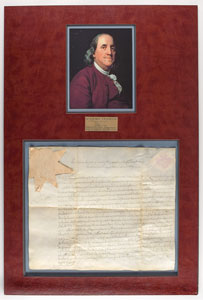 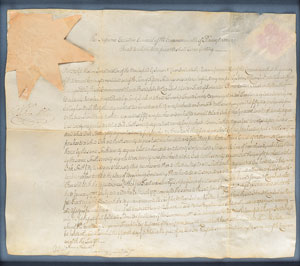 Vellum manuscript DS, signed “B. Franklin,” one page, 15.75 x 13.5, October 15, 1787. As president of the Supreme Executive Council of Pennsylvania, Franklin grants a parcel of land called "Plumb Bottom" in Wharton Township, Fayette County, to John McClean. Signed in the left margin beneath the large embossed paper seal. Another wax and paper seal to the reverse shows through lightly to the blank margin at upper right. Mounted and matted with a color image and engraved plaque to an overall size of 21 x 31.5. In very good to fine condition, with a hint of toning along the heavy intersecting folds, and slightly irregular adhesion to signature, which is otherwise large and clean.

A few months earlier, on May 25, the Constitutional Convention convened at Philadelphia, and the fifty-five delegates, including Franklin, spent a heated summer hammering out the core issues and fine points of what would emerge as the Constitution of the United States. The proceedings were marked throughout by much disagreement and even divisiveness, which was largely alleviated by Franklin's dramatic speech on September 17, the final day of the Convention. Franklin, too weak to address the assembly himself, entrusted his words to fellow Pennsylvanian James Wilson: 'I agree to this Constitution with all its faults, if they are such; because I think a general Government necessary for us, and there is no form of Government but what may be a blessing to the people if well administered…. I doubt…whether any other Convention we can obtain, may be able to make a better Constitution…. Thus I consent…to this Constitution because I expect no better, and because I am not sure, that it is not the best.'