Massive NASA lunar chart signed by a crewman from every Apollo moon flight, including six moonwalkers on their landing sites 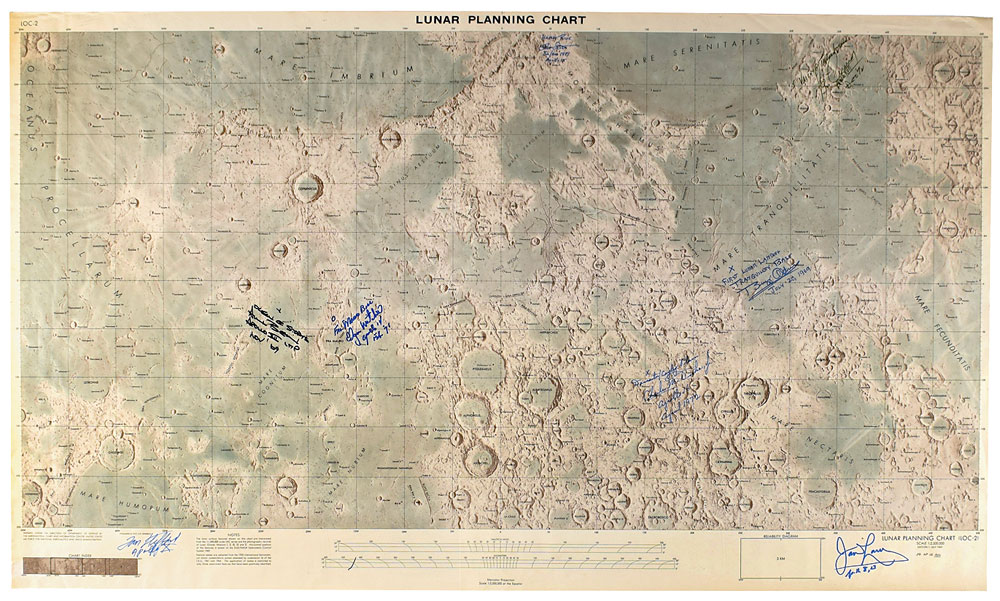 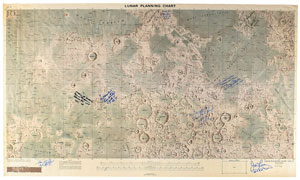 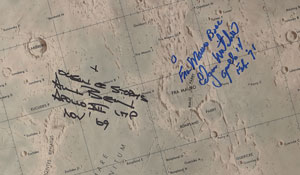 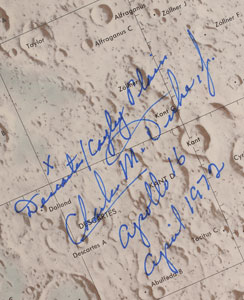 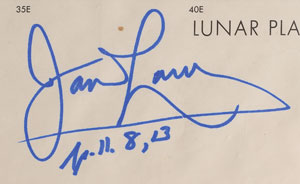 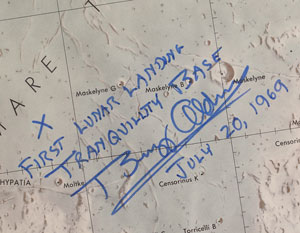 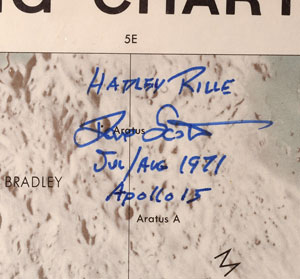 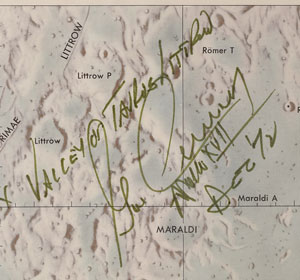 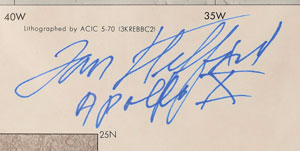 Massive NASA lunar chart signed by a crewman from every Apollo moon flight, including six moonwalkers on their landing sites

Extremely rare color first edition 1:2,500,00 scale Lunar Planning Chart (LOC-2), 49 x 29, signed by a crewman from all nine Apollo lunar missions. A moonwalker from each of the six lunar landing mission has signed in blue or black felt tip, with each astronaut marking his respective landing site—"First Lunar Landing, Tranquility Base, Buzz Aldrin, July 20, 1969," "Ocean of Storms, Alan Bean, Apollo XII LMP, Nov '69," "Fra Mauro Base, Edgar Mitchell, Apollo 14, Feb '71," "Hadley Rille, Dave Scott, Jul/Aug 1971, Apollo 15," "Descartes/Cayley Plain, Charles M. Duke Jr., Apollo 16, April 1972," and "Valley of Taurus Littrow, Gene Cernan, Apollo XVII, Dec '72." Also signed in the lower border: "Tom Stafford, Apollo X" and "James Lovell, Apollo 8, 13." Marked in the lower right in pencil: "10 of 12 GHL." Prepared under the direction of the Department of Defense by the Aeronautical Chart and Information Center, with lower notes section reading, in part: "The lunar surface features shown on this chart are interpreted from the 1:1,000,000 scale LAC series and the photographic records of Lunar Orbiter Missions I, II, III, IV and V. Horizontal position of the features is based on the DoD/NASA selenodetic control system 1969." Rolled and in fine condition, with a stray ink mark and some slight creasing to edges, which could be easily matted out if so desired. Desirable for its imposing size and coveted for its rarity—only ten of these massive lunar maps were originally signed, without Stafford and Lovell—this Lunar Planning Chart portrays the landing sites of every manned flight to the lunar surface in remarkable detail and remains one of the largest moon maps ever produced for NASA.