Cobb’s defense of “the ‘terrible’ spiking of Baker” 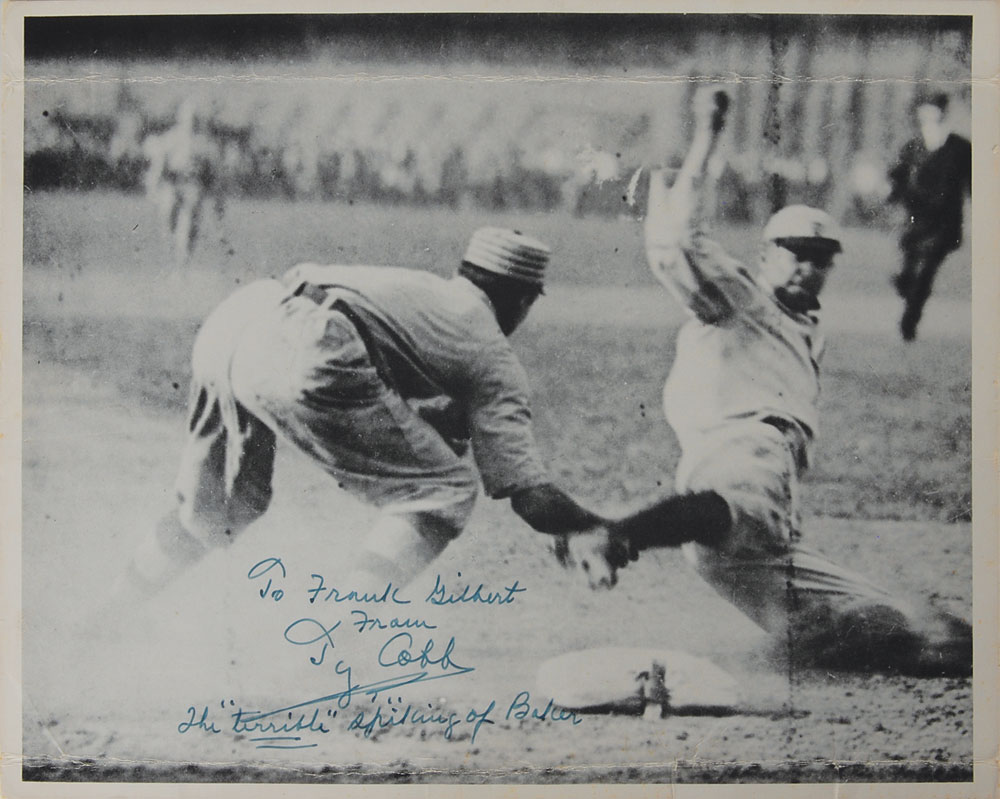 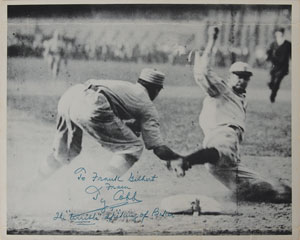 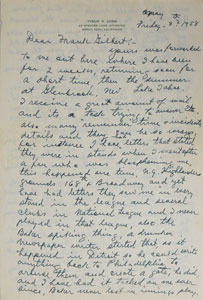 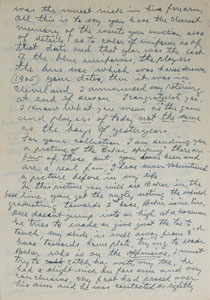 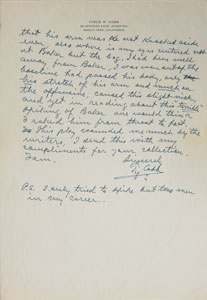 Cobb’s defense of “the ‘terrible’ spiking of Baker”

Remarkable pairing of a signed handwritten letter describing the notorious 'Baker spiking' and an inscribed photo of the incident: handwritten letter signed "Ty Cobb," three pages on two sheets, 7.25 x 10.5, personal letterhead, August 2, 1958. In part: "I receive a great amount of mail and its a task trying to answer etc. Also many 'remember' time & incidents, details and they can be so wrong. For instance, I have had letters that stated they were in stands when I went after a fan who was blaspheming me, this happened one time, N.Y. Highlanders grounds 168th & Broadway and yet have had letters they saw me in every stand in the league and several clubs in National League and I never played in that league. Also the Baker spiking thing, a drunken newspaper writer started that, as it happened in Detroit so he could write anything back to Philadelphia to arouse them and create a gate, he did, and I have had it tacked on me ever since. Baker never lost an inning's play, was the merest nick in his forearm…I know what you mean as the game and players of today not the same as the boys of yesteryears. For your collection I am sending you a picture of the 'Baker spiking.' There are few of these out, you have been and are a real fan, I have never volunteered a picture before in my life.

In this picture you will see Baker in the base line, you get the angle, noting that infield graduating towards 2nd base, Baker in line. One doesn't jump into or high at a baseman, he tries to evade or give just the toe to touch. My slide is well away from 3rd base towards home plate, trying to evade Baker who is on the offensive. I must try to catch bag with my toe, he had a slight nick on fore arm and very conclusive, my foot had passed over his arm and he was contacted so lightly that his arm was not knocked aside even. Also where is my eyes centered, not at Baker but the bag. I had been well away from Baker, I was even out of the baseline had passed his body only, only his stretch of his arm and much on the offensive, caused this slight nick, and yet in reading about this 'terrible' spiking of Baker one would think I raked him from throat to foot. This play wounded me much by the writers. I send this with my compliments for your collection." He adds a postscript at the conclusion, "P.S. I only tried to spike but two men in my career."

Includes the exceedingly rare cardstock 10 x 8 photo mentioned, signed and inscribed in fountain pen, "To Frank Gilbert, from Ty Cobb, The 'Terrible' spiking of Baker." The letter is in fine condition; photo is in very good condition, with scattered creasing and heavy horizontal folds to the top and bottom, not affecting the main image itself. Extremely long and rife with superb baseball content, Cobb's letter alone is of the utmost desirability and lends insight into his notoriously volatile temperament, as well as the play of his Hall of Fame counterpart Frank Baker. The inclusion of the immensely rare signed photo of the infamous 'Baker spiking' elevates this lot to the highest tier of appeal. Accompanied by a full letter of authenticity from PSA/DNA.