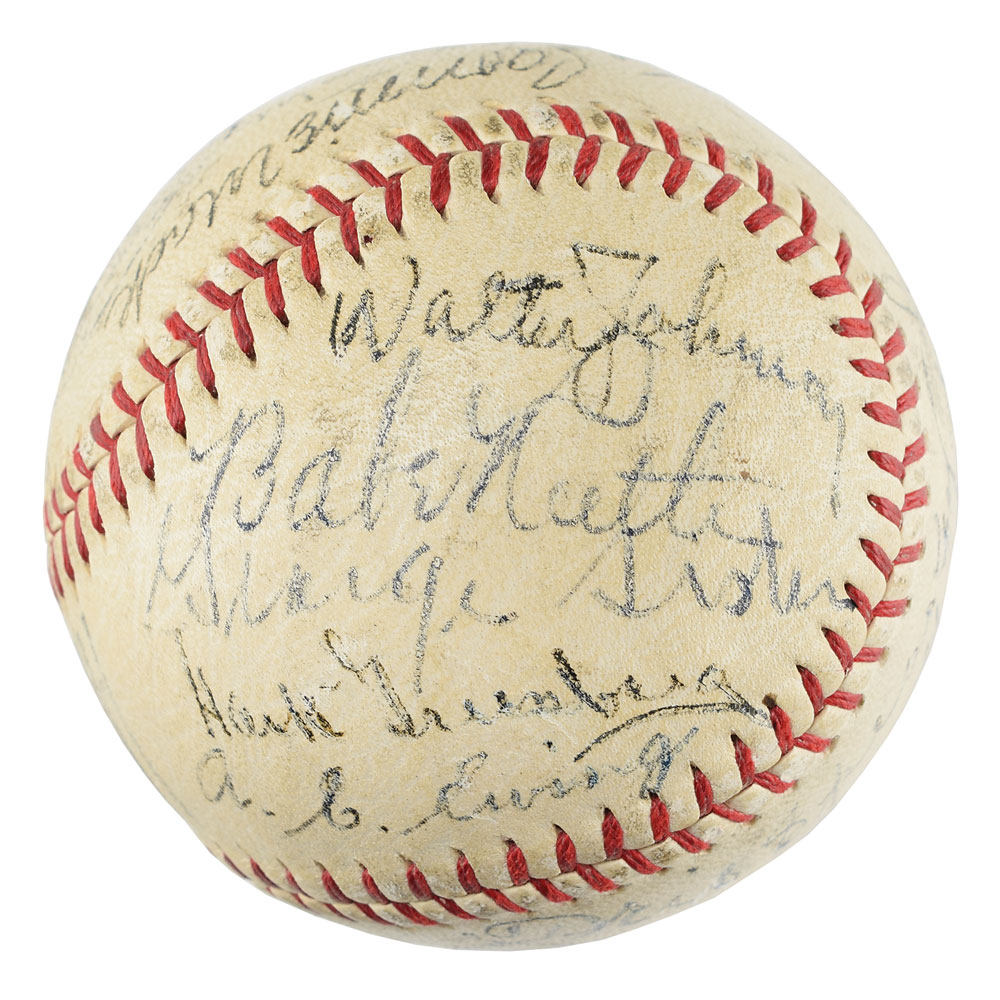 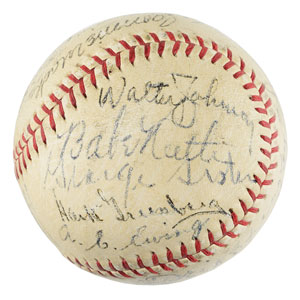 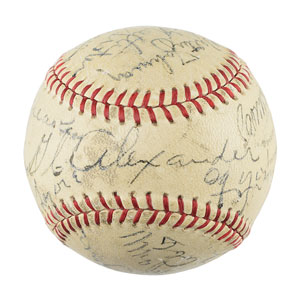 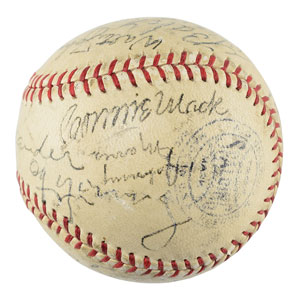 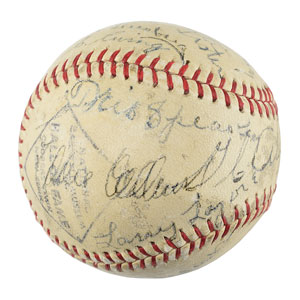 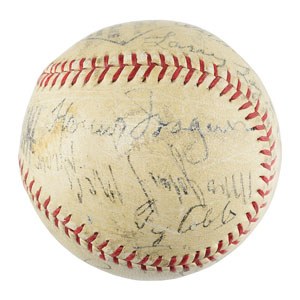 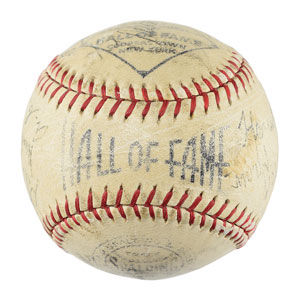 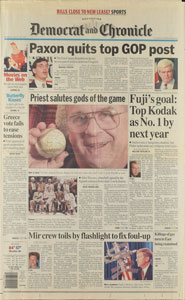 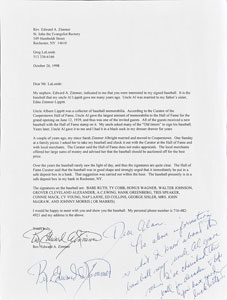 In 1939, Alburn Lippitt, "who was a devoted baseball memorabilia collector" (according to the Rochester Newspaper front page story) attended the opening induction ceremonies at the Hall of Fame in Cooperstown. Mr. Lippitt had donated a significant amount of baseball memorabilia for the grand opening, "including a mid-1860s Baraboo, Wisconsin full uniform" - one of the oldest uniforms ever seen to date! As such, he was invited to be an honored guest at the festivities and the Hall of Fame presented him with a completely signed "Hall of Fame" baseball. Then, in 1947, for his nephew Edward Zimmer's ordination as a priest, Mr. Lippitt presented Edward this ball as a gift. Until 1999, Reverend Zimmer kept the ball in his sock drawer for safe keeping knowing that it was not only a special piece of sports history but also of sentimental value from his Ordination Day.

Then, an enlightening opportunity surfaced! Reverend Zimmer had a parishioner who needed a prosthetic leg and the Reverend wanted to raise the funds to make this happen. His daughter did research on the baseball and when it was determined to be of significant value (over $10,000 at the time) they decided to auction the baseball and use the money as a gift to help a man walk again! "Mr. Mint" Alan Rosen was chosen to auction the ball and in June 1999, the ball was auctioned and achieved what was then an astronomical sum of $21,000! Our consignor was the winning bidder and has treasured this ball for almost 20 years, much as Reverend Zimmer did for 50 plus years before him, and his uncle Lippitt did for nearly 10 years before that.

It's a rarity to be able to successfully trace the lineage of most pieces, but the offered orb sure has a great pedigree and the story will forever be a fantastic conversation piece for the winning bidder. We could wax poetic for paragraphs about the inaugural induction class and each iconic great, or "virtual litany of the saints as baseball heroes go." But why would you still be reading this if you were not an educated collector? Of course, the ball has the authentic signatures of Babe Ruth, Honus Wagner Walter Johnson, Tris Speaker, Eddie Collins, Ty Cobb, Grover Alexander, Connie Mack, Cy Young, Larry Lajoie and George Sisler. These were all living inaugural members, as Christy Mathewson was long deceased by 1939. The ball is also signed by Hank Greenberg, Mrs. John McGraw, Johnny Morris and A.C. Ewing. Interestingly, Johnny Morris was a Philip Morris executive's son, who had passed out cigarettes for sampling to all in attendance. Tobacco companies and baseball have been long intertwined since the beginning of the game.

We believe the historical significance far outweighs the condition drawbacks, but nonetheless value is predicated upon condition and we do not shy away from the reality that many of the ball's autographs are subtly enhanced. These enhancements (tracings) were obviously performed decades ago, but we have no knowledge as to who performed them or when they were actually done. A few, such as Collins, Lajoie, Alexander and Johnson are very obvious. Looking at Babe Ruth's autograph ("8-9/10") under a 10 power lighted jewelers loupe, we see no enhancements. And George Sisler, whose scripted gem resides under Ruth's is also untouched. Unfortunately, the balance of the signatures have varying degrees of tracing, some for only a few letters and some more significant.

We offer independent LOA's for your comfort and we could not emphasize enough the visual appeal of this signed baseball, in addition to the historical pedigree. The Rochester Democrat and Chronicle original newspaper accompanies the lot along with Al Rosen's original invoice and an LOA from Reverend Zimmer, dated 1998, who owned the ball for over 50 years. Also comes with an LOA from James Spence Authentication (JSA) which details the degree of enhancements.

This is certainly not a $600,000 baseball, but it is also not without historical significance and is offered without reserve and with a minimum bid that even a mildly curious collector would have his interest peaked. Visual aesthetics, incredible provenance, and a price history which places it in the stratosphere of autographed baseballs.