Ultra-rare autograph letter from President Johnson to Speaker McCormack, a key supporter of the 'Great Society' 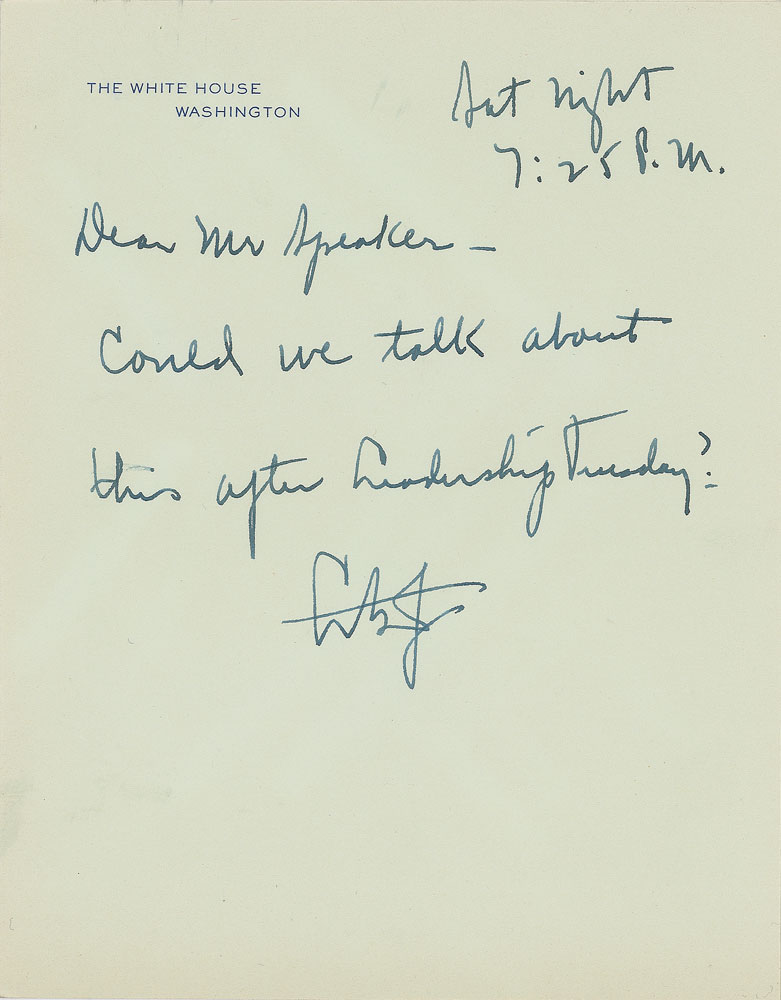 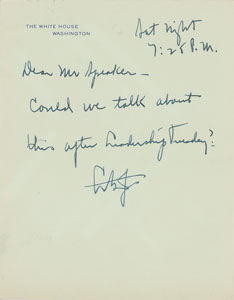 Ultra-rare autograph letter from President Johnson to Speaker McCormack, a key supporter of the 'Great Society'

Excessively rare ALS as president, signed “LBJ,” one page, 7 x 8.75, White House letterhead, no date but written on "Sat Night, 7:25 P.M." Letter to Speaker of the House John W. McCormack, in full: "Dear Mr. Speaker—Could we talk about this after Leadership Tuesday?" In very fine condition.

Autograph letters and notes by Johnson are extremely scarce in general, with his letters as president standing among the rarest presidential autographs—this is just the second Johnson ALS as president on standard White House stationery that we have ever offered. That it is to Speaker of the House John McCormack is equally notable. During his own time in the House and Senate, Johnson had emerged as one of the most capable legislators of his time, utilizing his domineering personality to persuade other politicians in his favor. Although McCormack led with the soft touch of an elder statesman, he proved similarly capable of shepherding progressive legislation through Congress. McCormack's nine years as Speaker were predominated by the passage of LBJ's Great Society legislation, including laws to expand civil rights, access to public education, and health care for the elderly.

While the exact context of this letter is not known, Johnson is presumably referring to a meeting with Democratic leadership, which would have comprised the likes of Speaker McCormack, House Majority Leader Carl Albert, and Senate Majority Leader Mike Mansfield. Beginning in 1965, the president also instituted a significant 'Tuesday lunch,' a weekly White House luncheon with his closest advisers, which became the administration's focal point for foreign policymaking as the war in Vietnam escalated. While McCormack was not one of these advisors in Johnson's inner circle, LBJ's reference to "Tuesday" is indeed interesting in light of these famous luncheons. Considering the ultra-rare nature of autograph letters by Johnson as president, and the importance of McCormack in ushering in his Great Society reforms, this is a noteworthy and exceptionally desirable piece.