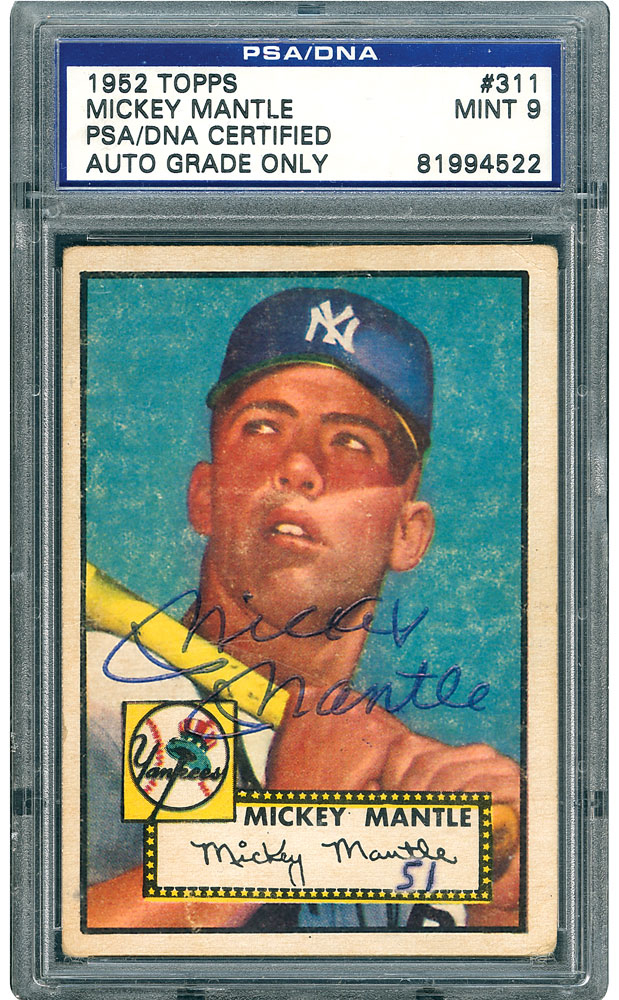 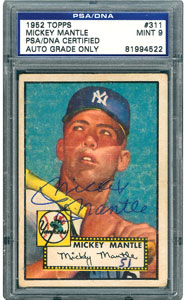 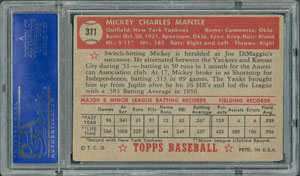 Autograph authenticated and graded by PSA/DNA MINT 9. Offered is arguably the holy grail of the autographed card collecting community, a MINT 9 signature on the 1952 Topps #311 Mickey Mantle rookie card. Signed boldly in blue Sharpie, the signature has been awarded a MINT 9 grade. According to recent population (and published) reports, this is one of only 11 examples of this signed card at this level.

Autographed card collecting was a very small segment of the hobby back in the 1980s, and it hadn't really generated much more interest even up to 1995, when Mantle succumbed to liver disease. While "The Mick" was a regular on the autograph show circuit in the last decade of his life, collectors had him sign mostly baseballs, magazine covers, photos, but not very many baseball cards. The feeling two decades ago was autographs on cards 'devalued' the card itself, and at that time, a Mickey Mantle rookie card was the premiere card in the entire hobby and collectors were not willing to 'lose money' having Mantle sign this prestigious pasteboard. Now, collectors are realizing the dearth of vintage signed baseball cards and are clamoring for autographed cards of the biggest names...namely Mickey Mantle.

The card itself is well centered, with some light, even surface wear, typical for this issue. Many of the collector grade Mantle rookie cards have a general overall surface wear, as Mantle was the baseball darling in his early days, and his card was enjoyed by young boys wanting to be like the golden boy. Mantle was the key player (even at the tender age of 20), on World Series teams during his first three seasons in the majors. In addition, the number "51" has been written in the name box, indicative of his rookie season in the major leagues. The signature is perfectly placed, just below the chin and only intersecting the Yankees emblem box in the smallest way.

Despite the light surface issues, the card displays well, and eye appeal is enhanced by the up close portrait complemented by the superb blue felt tip signature just below.

Collecting signed vintage baseball cards is one of the fastest growing segments of the hobby, and, with the passing of one of baseball's most beloved players, there is a finite supply of known Mantle examples.

Authenticated and graded by PSA/DNA as a MINT 9 signature.