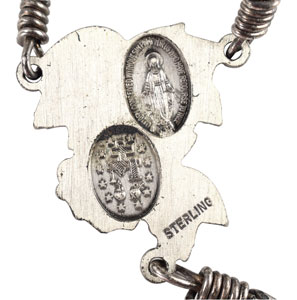 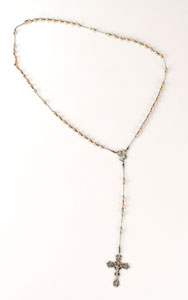 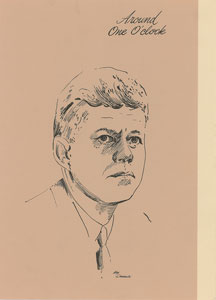 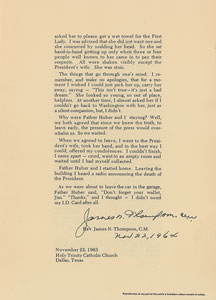 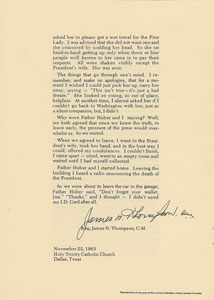 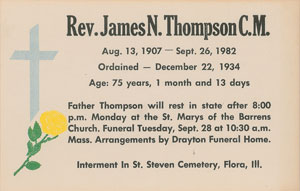 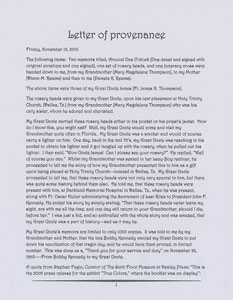 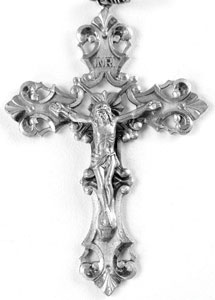 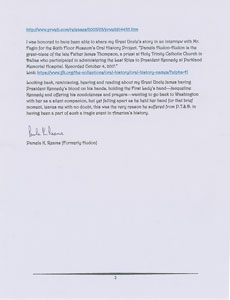 Father James Thompson's rosary bead necklace which was present with him at Parkland Memorial Hospital in Dallas, Texas, while alongside Father Oscar Huber to administer the last rites to President John F. Kennedy and to comfort First Lady Jacqueline Kennedy with prayer in her time of grief. The gorgeous rosary has silvery pearl-type beads strung on a fine metal chain, features a sterling silver miraculous medal and sterling silver crucifix, and measures approximately 24.5″ long. In fine condition. Additionally includes a funerary cross which belonged to Father Thompson; two rare pamphlets of his memoir, "Around One O'Clock," printed in a limited edition of 1000, both signed in fountain pen, "James N. Thompson, C.M.," with one dated, "Nov. 22, 1964"; and a funeral card honoring Rev. Thompson.

Accompanied by a letter of provenance from Father Thompson's grand-niece, in part: "The rosary beads were given to my Great Uncle, upon his placement at Holy Trinity Church, [Dallas, Tx.] from my Grandmother [Mary Magdalene Thompson] who was his only sister…My Great Uncle carried these rosary beads either in his pocket or his priest's jacket…these rosary beads were not only very special to him, but there was quite some history behind them also. He told me, that these rosary beads were present with him, at Parkland Memorial Hospital in Dallas, Tx., when he was present, along with Fr. Oscar Huber administering the Sacrament of Last Rites to President John F. Kennedy. He ended his story by simply stating, 'That these rosary beads never leave my sight, are with me all the time, and one day will return to your Grandmother, should I die, before her.' I was just a kid, and so enthralled with the whole story and was amazed, that my Great Uncle was a part of history—sad as it may be. My Great Uncle's memoirs are limited to only 1000 copies. It was told to me by my Grandmother and Mother, that the late Bobby Kennedy wanted my Great Uncle to put down his recollection of that tragic day, and he would have them printed." An image of Father Thompson leaving the hospital can be seen as part of a digital repository hosted by the UNT Libraries.

In the four-page memoir pamphlet "Around One O'Clock," Thompson outlines the events of his day on November 22, 1963, offering yet another firsthand perspective of the tragedy—he was sitting in the rectory when he saw the news on TV that the president had been shot. He remembered standing up and saying, 'Somebody's got to go,' as Parkland Memorial Hospital was part of Holy Trinity's parish and the priests went there regularly. Father Thompson readied the car as Father Huber gathered his sick-call kit, and Thompson drove them to the hospital. They met no resistance from security when they arrived, as the first lady had apparently asked for a priest to be called. He dropped Father Huber off at the emergency room entrance, and parked the car before going inside. In the memoir, Father Thompson recalls the scene in Trauma Room One: "Father Huber was standing at the President's head reading the prayers for the dying. The President's wife, holding his right hand, was beside the President, standing there immobile as a statue…I did manage to offer a Sign of the Cross in absolution and one as a Blessing. Then Father Huber began to pray aloud the Lord's Prayer, etc., and all answered in articulate response, the President's wife seeming to lead us in response." These rosary beads, always present in Father Thompson's pocket, would have been the ones he utilized while performing these important Catholic rites and rituals. An amazing religious relic from one of the most tragic days in American history.