The Babe endorses Hillerich & Bradsby: "Every hit and every hitting record to my credit speaks for the oval Slugger trademark" 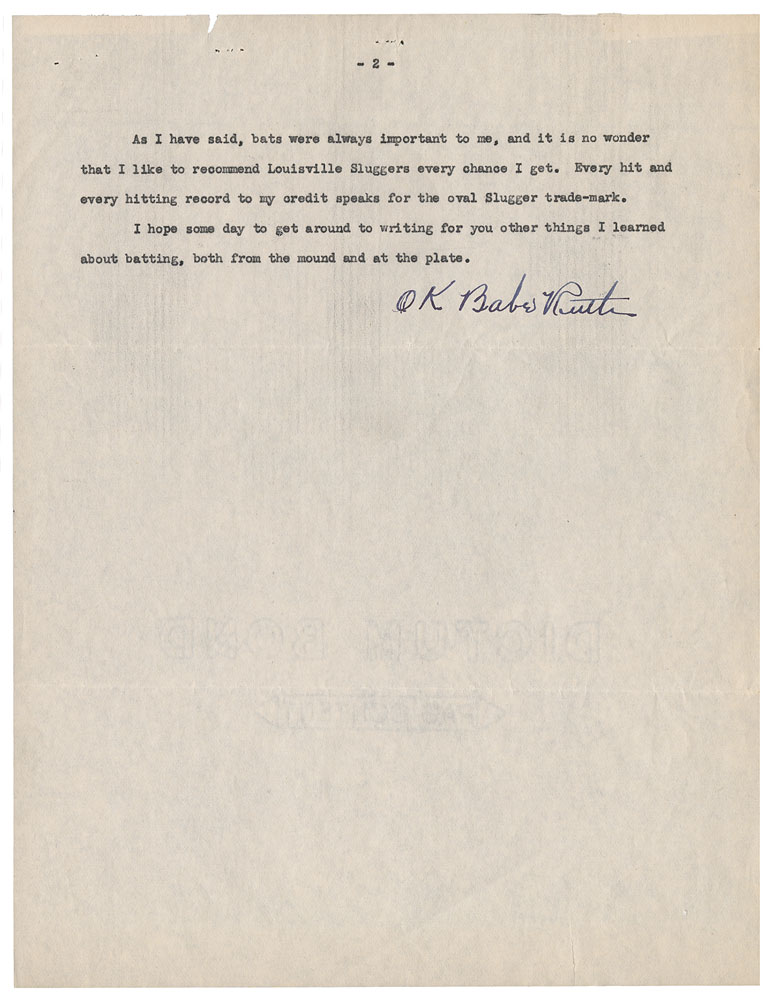 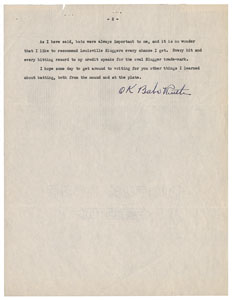 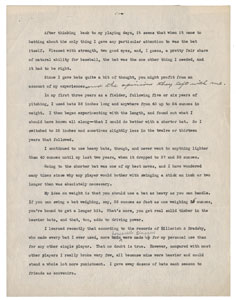 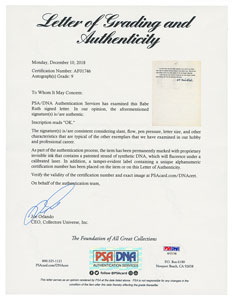 The Babe endorses Hillerich & Bradsby: "Every hit and every hitting record to my credit speaks for the oval Slugger trademark"

Important typescript draft of a testimonial for Hillerich & Bradsby's Louisville Slugger baseball bats, two pages, 8.25 x 10.75, endorsed at the conclusion in fountain pen, "OK, Babe Ruth." In the piece, Ruth discusses in detail the specifications of the bats he used during his career, and praises the company's products. In full:

"After thinking back to my playing days, it seems that when it came to batting about the only thing I gave particular attention to, was the bat itself. Blessed with strength, two good eyes, and, I guess, a pretty fair share of natural ability for baseball, the bat was the one other thing I needed, and it had to feel right. Since I gave bats quite a bit of thought, you might profit from an account of my experiences and the opinion they left with me.

In my first three years as a fielder, following five or six years of pitching, I used bats 36 inches long and anywhere from 40 to 54 ounces in weight. I then began experimenting with the length, and found out what I should have known all along—that I could do better with a shorter bat. So I switched to 35 inches and sometimes slightly less in the twelve or thirteen years that followed.

I continued to use heavy bats, though, and never went to anything lighter than 40 ounces until my last two years, when it dropped to 37 and 38 ounces. Going to the shorter bat was one of my best moves, and I have wondered many times since why any player would bother swinging a stick an inch or two longer than was absolutely necessary.

My idea on weight is that you should use a bat as heavy as you can handle. If you can swing a bat weighing, say, 38 ounces as fast as one weighing 35 ounces, you're bound to get a longer hit. What's more, you get real solid timber in the heavier bats, and that, too, adds to driving power.

I learned recently that according to the records of Hillerich & Bradsby, who made every bat I ever used, more Louisville Sluggers were made up for my personal use than for any other single player. That no doubt is true. However, compared with most other players I really broke very few, all because mine were heavier and could stand a whole lot more punishment. I gave away dozens of bats each season to friends as souvenirs.

As I have said, bats were always important to me, and it is no wonder that I like to recommend Louisville Sluggers every chance I get. Every hit and every hitting record to my credit speaks for the oval Slugger trademark. I hope someday to get around to writing for you other things I learned about batting, both from the mound and at the plate."

Arguably the most significant Ruth manuscript ever seen in our hobby, which should appeal to the broadest base of collectors. It's hard to imagine the most advanced bat collectors would not consider this to be as important as any of his historical Babe Ruth bats. With Ruth's record setting/milestone weapons reaching the lofty heights of million dollar prices realized, it would only make sense a letter such as this would be equally as priceless. We know of no other Ruth letter detailing to such an extent Ruth's requirements for the bats he used over his career. The unique content of this letter begs for its display with the finest Ruth bat, in the most advanced collection.

A few notations and editorial revisions have been made in another hand. In fine condition, with light creasing and a small edge split to a fold at the bottom of the signed page. Accompanied by a full letter of grading and authenticity from PSA/DNA, evaluating the signature as "MINT 9." A wonderful reflection by Ruth on the key to his success and legacy—using these heavy Louisville Slugger baseball bats, the 'Sultan of Swat' earned his nickname by clubbing 714 home runs over the course of his amazingly successful career.