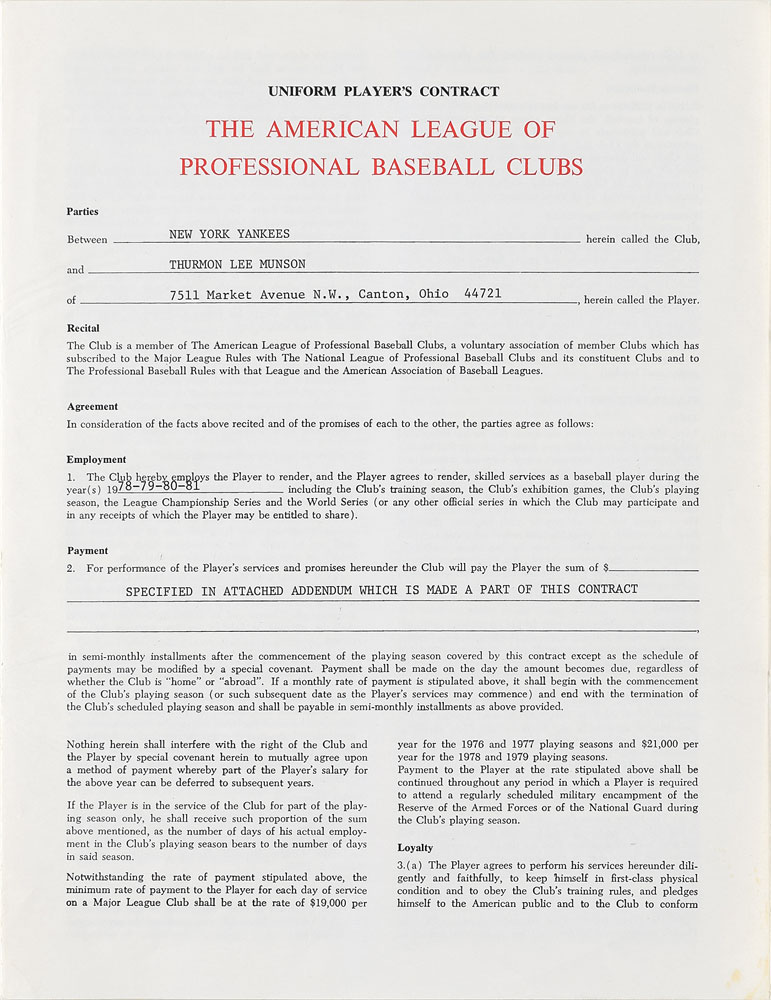 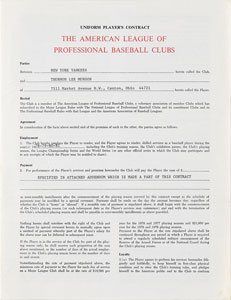 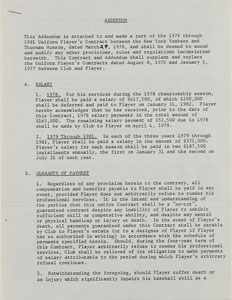 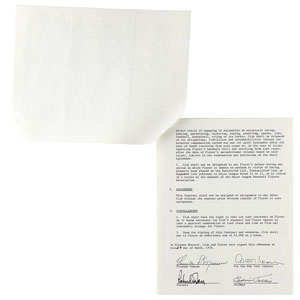 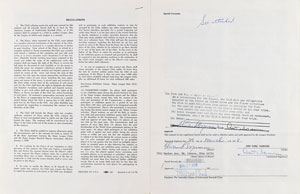 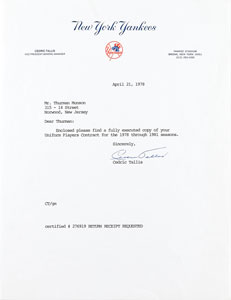 Contract, signed three times, “Thurman L. Munson,” six pages on three adjoining sheets plus a two-page addendum, 8.5 x 11, March 29, 1978. Thuman Munson's last contract, in which he agrees to render "skilled services as a baseball player during the year(s) 1978-79-80-81" for the New York Yankees, for salaries of $417,500 (in 1978) and $375,000 (in 1979-1981), as specified in a two-page addendum. Signed at the conclusion in blue ballpoint by Thurman Munson, American League President Lee MacPhail, and Yankees President/CEO Al Rosen, and signed again by Munson and Rosen on a "Special Covenants" statement concerning hotel costs. The addendum outlining Munson's salary and guarantee terms has also been signed at the conclusion by Munson and Rosen, as well as by Cedric Tallis as a witness; the other witness's signature is a photocopy. In fine condition. Accompanied by a typed letter signed by Cedric Tallis addressed to Munson on New York Yankees letterhead, April 21, 1978, in full: "Enclosed please find a fully executed copy of your Uniform Players Contract for the 1978 through 1981 seasons."

The addendum is particularly significant, as it makes the deal a "'no-cut,' guaranteed contract despite any inability of Player to exhibit sufficient skill or competitive ability, and despite any mental or physical handicap or injury or death. In the event of Player's death, all payments guaranteed under this Contract shall be payable by Club to Player's estate." A second article notes: "Notwithstanding the foregoing, should Player suffer death or injury which significantly impairs his baseball skill as a direct result of engaging in automobile or motorcycle racing, fencing, parachuting, skydiving, boxing, wrestling, karate, judo, football, basketball, skiing or ice hockey, Club shall be released of its obligations." His airplane-flying hobby is notably absent from this list of risky activities, which was a specific point of negotiation in his deal.

The New York Times column, 'Thurman Munson Was Proud Captain of the Yankees,' published one day after the New York catcher's death in a plane crash on August 3, 1979, sheds some light on the circumstances surrounding this very contract: 'When Munson signed a four‐year contract in the spring of 1976, he said the team's principal owner had promised that no player other than Catfish Hunter would earn more money than he. However, after the Yankees signed Reggie Jackson as a free agent in November 1976, Munson asked to have his salary raised to Jackson's level and Steinbrenner denied having made the promise. Their battle lasted for more than a year, finally being resolved in the last week of spring training in 1978. An integral part of the negotiations concerned Munson's flying. 'Thurman wanted it to be up‐front that he flew and that it was very important to him,' [his lawyer, Richard] Moss related. 'I think George understood that it was important to Thurman.' Most guaranteed contracts that exist in baseball today have clauses absolving the team of paying the remainder of the contract if the player is killed while flying a plane himself. Munson's contract, which averaged $420,000 a year and had two more years to run after this one, had no such restricting clause.' Accompanied by a full letter of authenticity from PSA/DNA.