Jottings from Houston on the night before his assassination 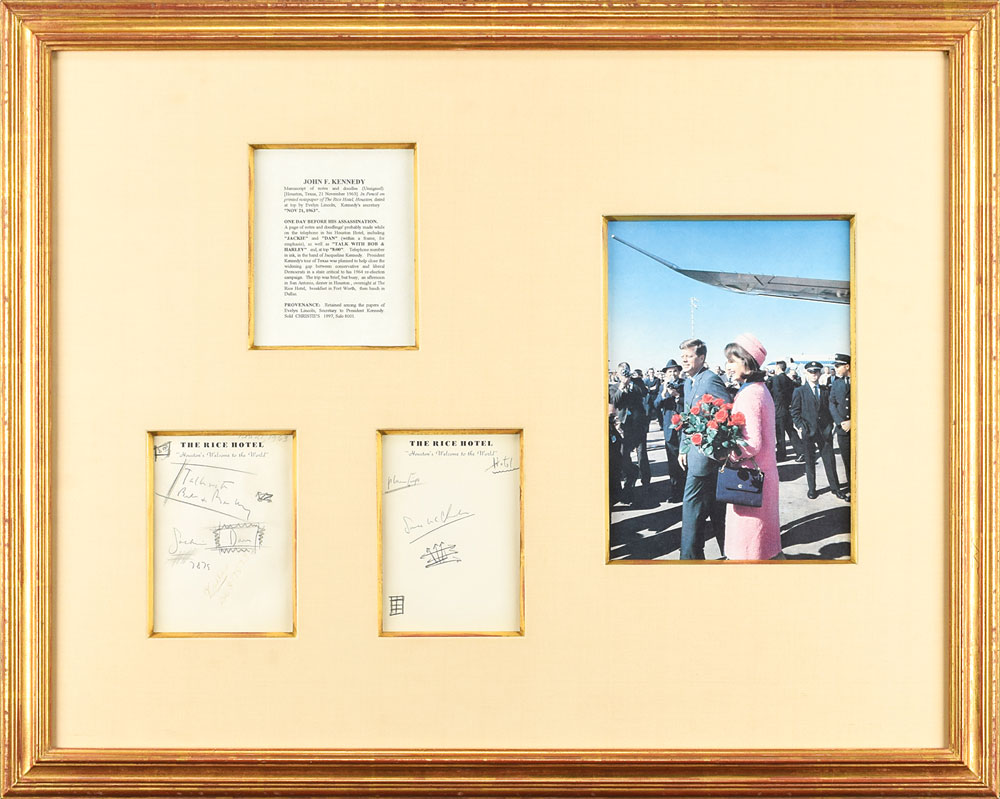 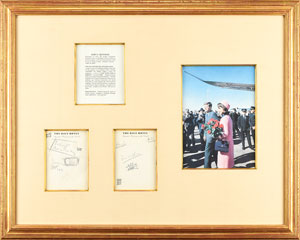 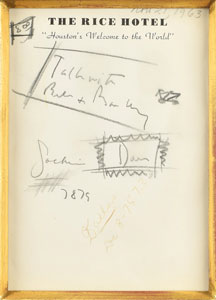 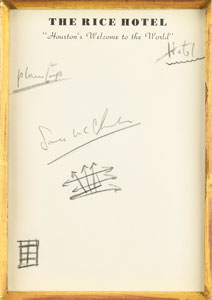 Jottings from Houston on the night before his assassination

Handwritten notes and doodles by John F. Kennedy from the night before his assassination, November 21, 1963, accomplished in pencil on two sheets of 4 x 5.5 stationery from the Rice Hotel in Houston, Texas. Jotting down notes, probably while on the telephone, Kennedy writes, "Talk with Bob & Harley," "Jackie," "Dan," "7879," and "8:00," on one sheet, and "plane trip," "Hotel," and "Sarah McClendon" on the other, and sketches a few grids and arrows. Below, a phone number is written in another hand: "Dallas, Dc 8-7573." Attractively archivally cloth-matted and framed with an image of the Kennedys at Love Field in Dallas prior to the assassination, as well as a printed description, to an overall size of 28 x 22.5. Provenance: Retained among the papers of his personal secretary, Evelyn Lincoln, and sold at Christie's in 1997.

President John F. Kennedy arrived at the Rice Hotel in Houston, Texas at 5:00 p.m. on November 21, 1963, where he stayed for three-and-a-half hours. During this time, he appeared at a meeting of the League of United Latin American Councils and read a statement honoring Joe A. Garza for his work with the organization. After the meeting, he left the Rice Hotel to go to the Coliseum for Congressman Albert Thomas's dinner, and later that night went to the Texas Hotel in Fort Worth where he stayed until morning. His note referencing "Sarah McClendon"—a White House reporter who Kennedy loathed—is particularly notable, as is the mention of his wife, "Jackie," who would so gracefully handle the tragedy the next day. A poignant pairing of Kennedy's notes from the night before his death.