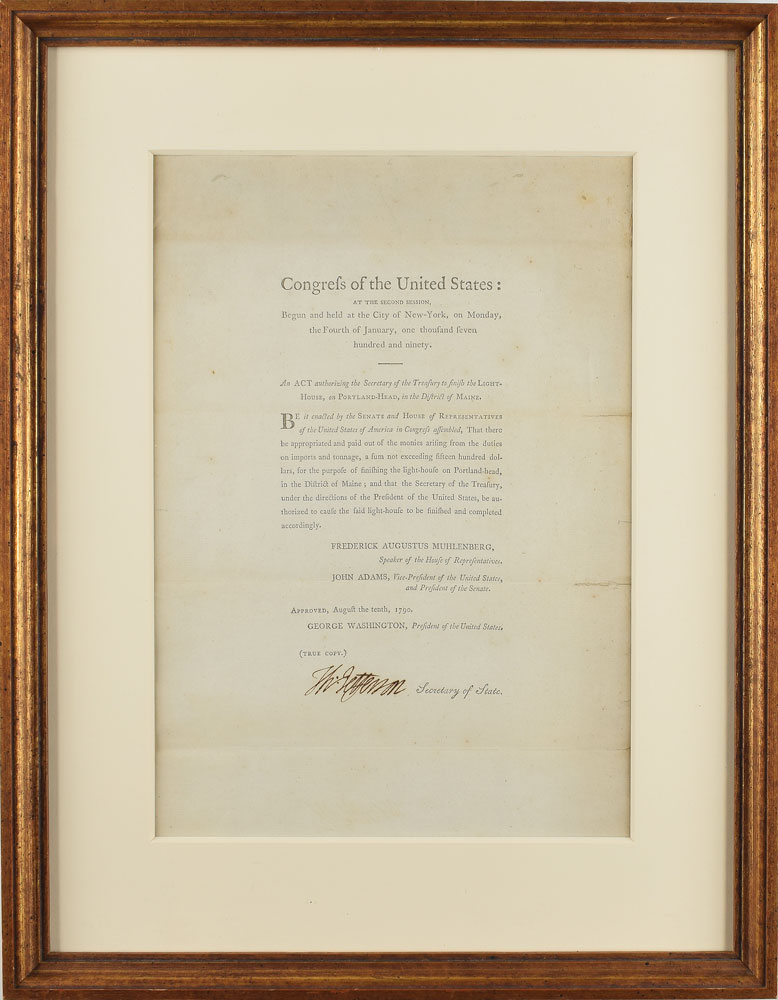 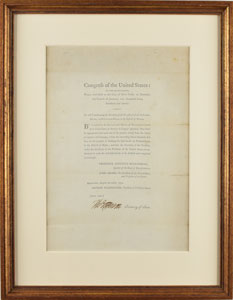 Superb DS, signed “Th: Jefferson,” one page, 9.5 x 13.75, August 10, 1790. Secretary of State Jefferson certifies "An Act authorizing the Secretary of the Treasury to finish the Light-House, on Portland-Head, in the District of Maine," appropriating a sum not exceeding $1,500 "for the purpose of finishing the light-house on Portland-head, in the District of Maine; and that the Secretary of the Treasury, under the directions of the President of the United States, be authorized to cause the said light-house to be finished and completed accordingly." Boldly and prominently signed at the conclusion by Jefferson; the document also bears the printed approvals of Speaker of the House Frederick Augustus Muhlenberg, Vice President John Adams, and President George Washington. Handsomely matted and framed to an overall size of 15.5 x 19.75. In fine condition, with light soiling, and splitting to two of the fold ends.

On August 7, 1789, the 1st US Congress authorized the transfer of ownership to federal control of twelve American lighthouses previously maintained by cities. George Washington's new federal government agreed to pay for the maintenance and repairs of lighthouses, piers, and buoys, provided the states in which they were located ceded them to the federal government within one year. Lighthouses, as well as all matters pertaining to navigation, fell under the jurisdiction of Secretary of the Treasury Alexander Hamilton. The Secretary of the Treasury supervised the local Customs Collector, who in turn supervised the lighthouse keeper. On a day to day basis, lighthouse upkeep was financed through the collection of ‘light-dues,’ or taxes collected from passing ships based on tonnage. This measure drew states closer to federal oversight.

Construction of the Portland Head Light had begun in 1787 with a $750 appropriation from the Massachusetts legislature. On June 10, 1790, Massachusetts agreed to cede its lighthouses to the federal government. Two weeks later, on June 24, 1790, Hamilton wrote to Benjamin Lincoln, then Collector of Customs for the port of Boston, and asked him to procure ‘an Account of the Cost of the Light House, so far as it is built—the height to which it is carried—the height to which it is proposed to be carried, and an estimate of the expence that will attend the Completion of it.’ Lincoln replied on July 3, 1790 that the 58-ft-high lighthouse would cost $700 to complete. On July 30, 1790, Hamilton wrote that he was holding off requesting appropriation until the state’s notice of cession had been received.

Passage of this Congressional Act gave Hamilton the money needed. On October 4, 1790, he instructed Lincoln ‘that no time may be lost,’ and the 72-foot-tall lighthouse was complete before the end of the year. On January 10, 1791, newly-appointed keeper Joseph Greenleaf lit the 16 whale oil lamps powering the lantern for the first time.

The Portland Head Light is the oldest lighthouse in Maine, and was the first lighthouse to be constructed under the jurisdiction of the US government. It has been memorialized in countless photographs and paintings, most notably a series of 1920s watercolors by Edward Hopper. Now a museum, it is considered the most photographed lighthouse in the United States.

As Secretary of State, Jefferson signed two copies of each Act of Congress for distribution to the executive of every state. Rhode Island had ratified the Constitution and become the 13th state in May of 1790: thus, 26 copies of this act would have been signed by Jefferson in total. A marvelous piece of early American history, pertaining to one of the nation's most iconic lighthouses.