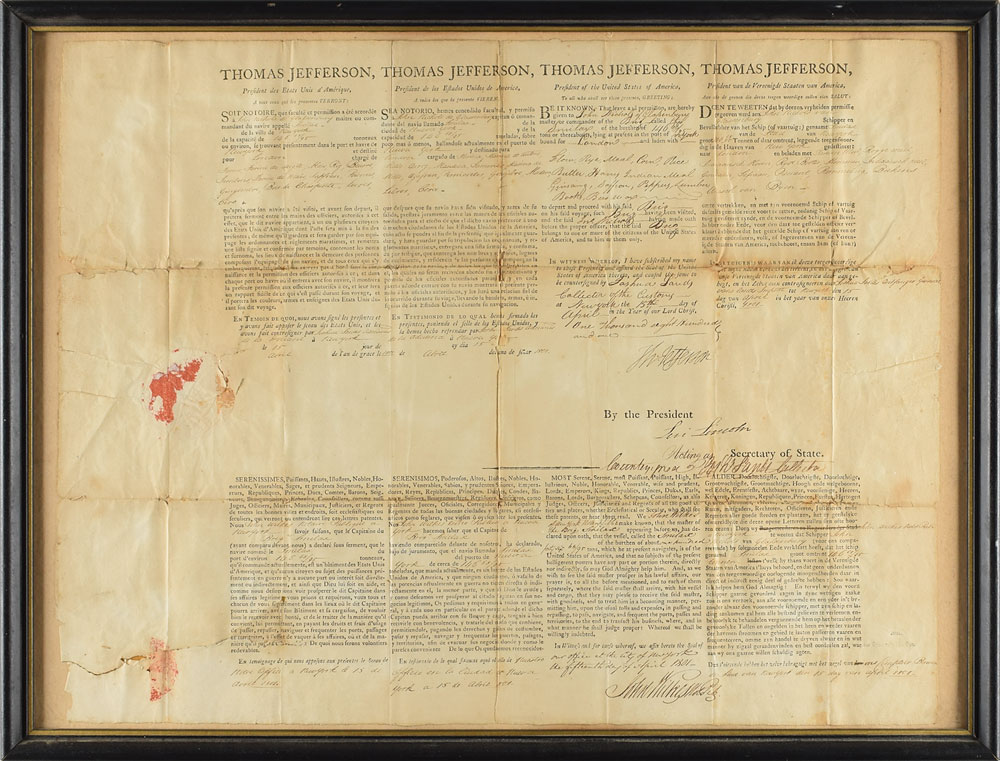 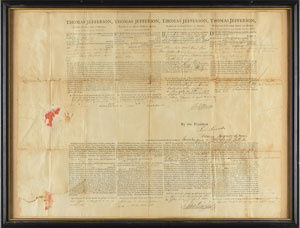 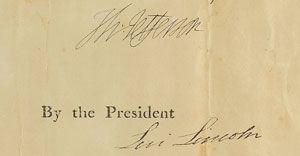 Very rare partly-printed DS, signed “Th: Jefferson” as president and “Levi Lincoln” as acting secretary of state, one page, 22.25 x 17.25, April 15, 1801. Four-language ship's paper issued to "John Nichols of Glassenbury, master or commander of the Brig called the Smilax…lying at present in the port of N. York bound for London and laden with Flour, Rye, Meal, Corn, Rice, Madera, Butter, Harry Indian Meal, Ginsang, Saffron, Peppers, Lumber, Books, Bees Wax." Signed crisply in the center by President Jefferson and countersigned by Acting Secretary of State Lincoln (with "Acting As" written next to the printed "Secretary of State"). Also countersigned below by Joshua Sands as Collector of the Port of New York; Sands had served in the Revolution and would later represent New York in Congress. Framed to a slightly larger size. In very good condition, with overall creasing, toning and small areas of paper loss along intersecting folds, a tear to the lower left edge, and both seals missing; both signatures and clear and clean, and Jefferson's signature is completely unaffected by any flaws. This type of document was generally left blank and signed in advance by the president and secretary of state, then sent to ports and harbors to be filled out as needed. This pass must have been signed quite early in Jefferson's term—Levi Lincoln, appointed as attorney general, also served as acting secretary of state from March 5 through May 1, 1801. James Madison had been officially named to the position, but did not arrive in Washington until May due to illness. A scarce and highly desirable presidential document—this is just the second such Thomas Jefferson-Levi Lincoln example we have encountered.