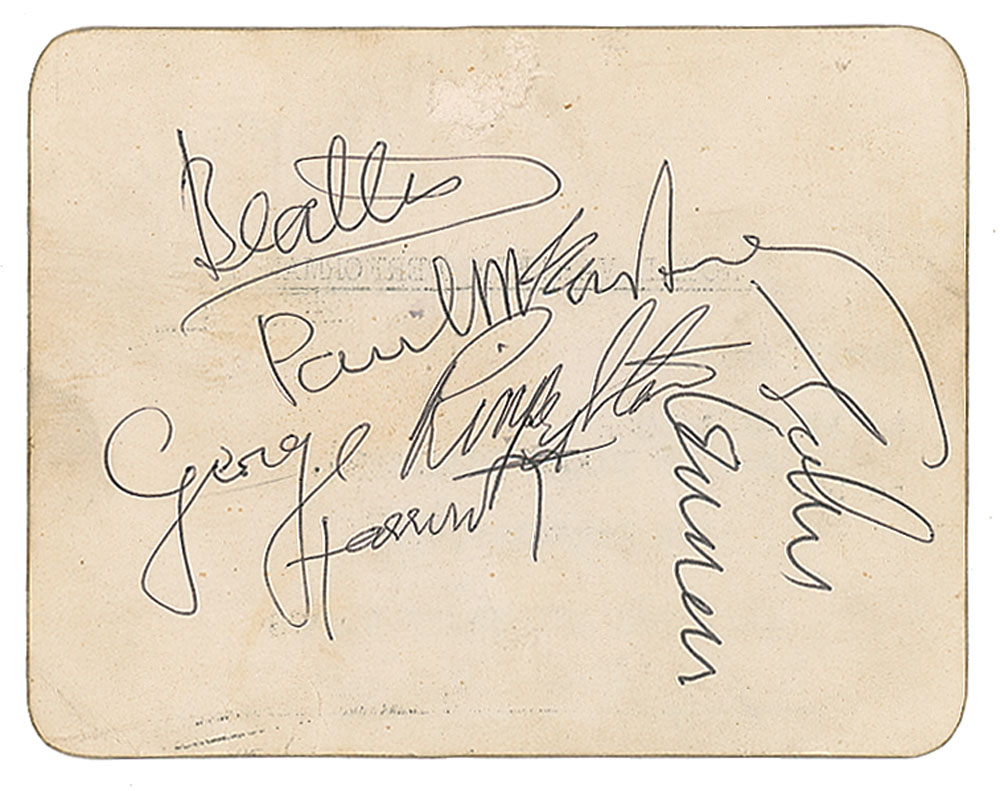 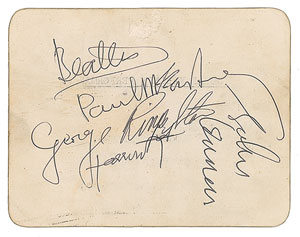 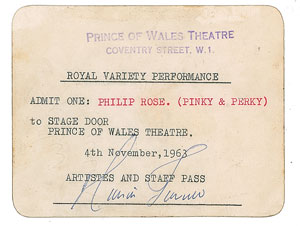 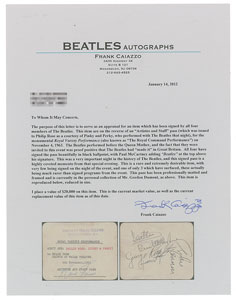 Rare and immensely desirable "Artistes and Staff" backstage pass, 4.5 x 3.5, for the infamous appearance of the Beatles at the Prince of Wales Theatre in London on November 4, 1963, for a royal variety performance before Queen Elizabeth and the Queen Mother, issued to Philip Rose as a courtesy of Pinky and Perky, marionette pigs who also performed that night; Philip Rose was one of the puppeteers. Signed on the reverse in black ballpoint, "Beatles, Paul McCartney," "John Lennon," "George Harrison," and "Ringo Starr." In very good to fine condition, with light overall soiling, and a small area of surface loss to the top center of the signed side.

Accompanied by five letters of authenticity from noted Beatles expert Frank Caiazzo, one reading, in part: "The Beatles performed before the Queen Mother, and the fact that they were invited to this event was proof positive that The Beatles had 'made it' in Great Britain. All four have signed the pass beautifully in black ballpoint…This was a very important night in the history of The Beatles, and this signed pass is a highly coveted memento from that special evening. This is a rare and extremely desirable item, with very few being signed on the night of the event, and one of only 3 which have surfaced, these actually being much rarer than signed programs from the event."

The band's selection as part of the Royal Variety Performance did much to propel Beatlemania across the whole of England. The group performed four songs—'From Me To You,' 'She Loves You,' 'Till There Was You,' and 'Twist and Shout'—and when ITV broadcasted the show a week later on November 10, an estimated 21 million people tuned in. This was also the event where John Lennon took a jab at the Crown with his famous bit of stage banter: ‘For our last number I'd like to ask your help. The people in the cheaper seats clap your hands. And the rest of you, if you'd just rattle your jewelry.’ A magnificent, fully signed piece from one of the earliest Beatles controversies.