Lincoln pledges himself as security for his close friend, Joshua F. Speed 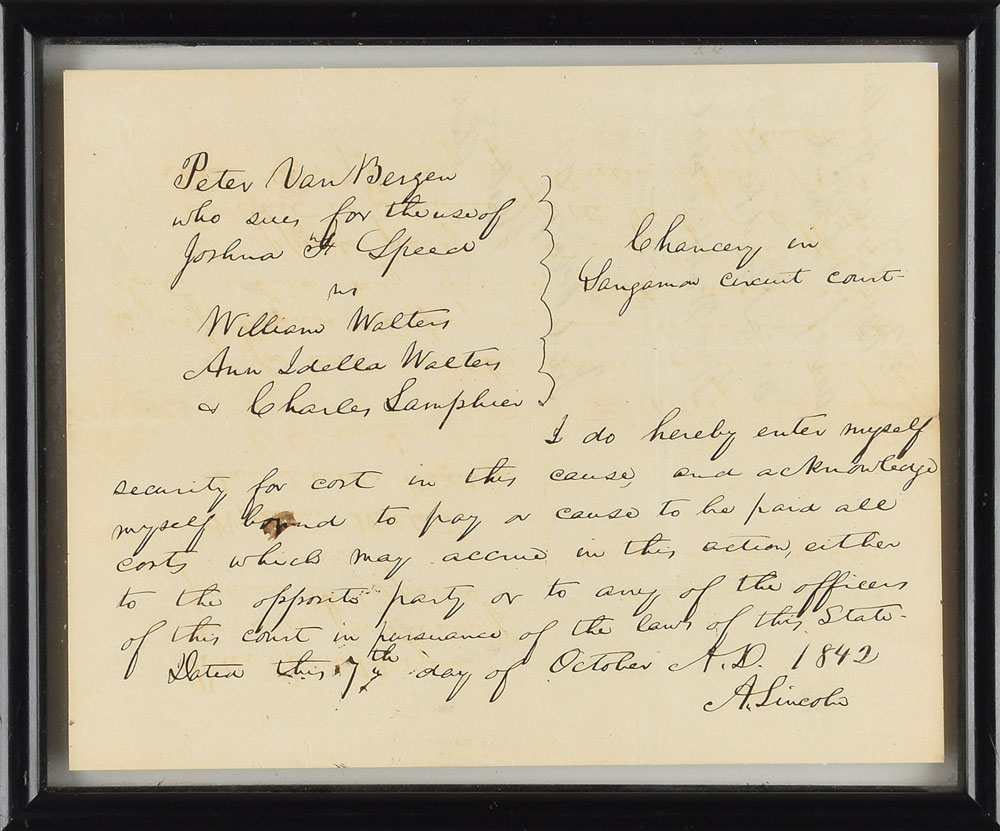 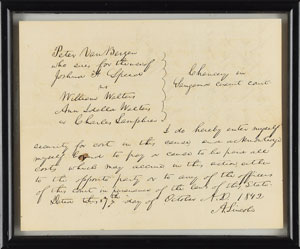 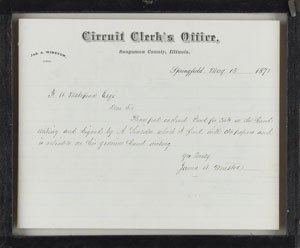 Lincoln pledges himself as security for his close friend, Joshua F. Speed

ALS signed “A. Lincoln,” 7.5 x 6, October 7, 1842. Superb official legal letter submitted to the Chancery in Sangamon Circuit Court, in the case of "Peter Van Bergen who sues for the use of Joshua F. Speed, vs. William Walters, Ann Idella Walters, & Charles Lanphier." In full: "I do hereby enter myself security for cost in this cause, and acknowledge myself beyond to pay a cause to be paid all costs which may accrued in this action, either to the appoints party or to any of the officers of this court in pursuance of the laws of this State." Framed between glass panels to an overall size of 8.75 x 7.25, with the reverse showing an 1873 letter from the Sangamon County Circuit Court Clerk's Office, in part: "Please find enclosed Bond for costs in the hand writing and signed by A. Lincoln which I find with the papers and is reliable as his genuine hand writing." In fine condition.

Joshua F. Speed was a close friend of Abraham Lincoln, the two having met when Lincoln moved to Springfield, Illinois, in 1837. Lincoln took up residence in Speed’s apartment above his general store, where the two notably shared a bed (the subject of some modern-day contention). When Speed returned to his native Louisville, Kentucky, in 1841, he entrusted his local financial affairs to his ‘Prairie Lawyer’ roommate. This document relates to a case involving Speed and the newspaper publisher William Walters: Walters had purchased a property from real estate speculator Peter Van Bergen, and fallen behind on payments. Meanwhile, Van Bergen had two outstanding debts to Speed—a loan and a court decision. To settle the accounts, Lincoln brought a lawsuit against William Walters, his wife Ann, and his brother-in-law and assistant Charles Lanphier. The judgment was delivered on November 26, 1842, awarding $1,155 to Van Bergen ‘for the use of Joshua F. Speed.’ A fantastic handwritten Lincoln piece with a close personal association.