Jackie on the Peace Corps logo, arts funding, and the sale of an unapproved picture 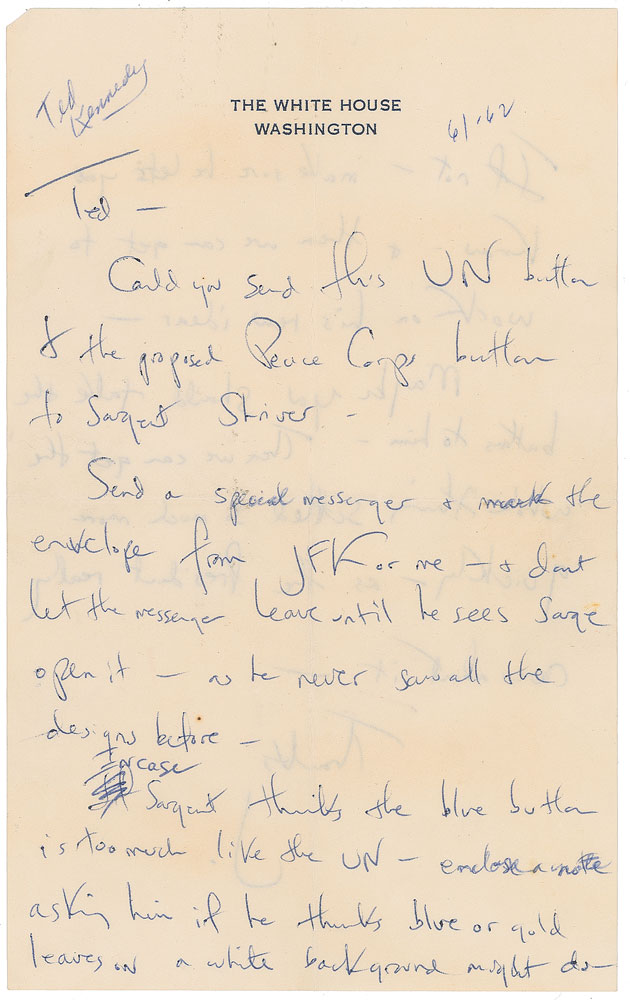 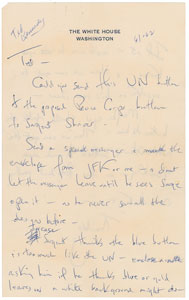 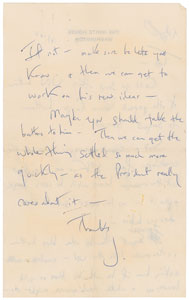 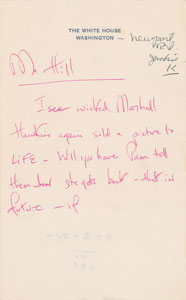 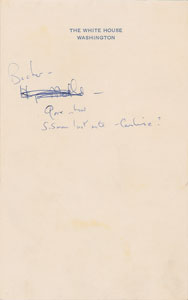 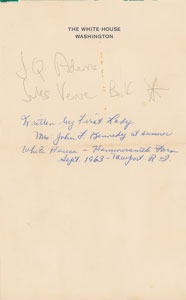 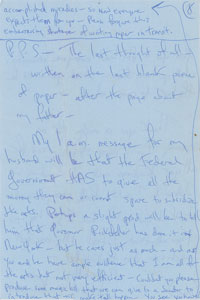 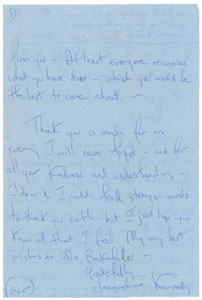 Jackie on the Peace Corps logo, arts funding, and the sale of an unapproved picture

Group of five autograph notes and letters by Jacqueline Kennedy, totaling seven pages on five 5 x 8 sheets of White House stationery, no dates. One letter is signed "J.," addressed to "Ted," her brother-in-law Ted Kennedy, in part: "Could you send this UN button & the proposed Peace Corps button to Sargent Shriver. Send a special messenger & mark the envelope from JFK or me—& don't let the messenger leave until he sees Sarge open it—as he never saw all the designs before. In case Sargent thinks the blue button is too much like the UN—enclose a note asking him if he thinks blue or gold leave on a white background might do—If not—make sure he lets you know—& then we can get to work on his new ideas. Maybe you should take the buttons to him—then we can get the whole thing settled so much more quickly—as the President really cares about it." One of President Kennedy's greatest achievements was the founding of the Peace Corps in 1961; his brother-in-law Sargent Shriver served as its first director. The original Peace Corps logo featured a stylized American flag with the stars transitioning to a dove of peace.

Another page is the conclusion of a letter to Governor Nelson Rockefeller, signed "Jacqueline Kennedy," on funding the arts in America, in part: "The last thought of all, written on the last blank piece of paper, after the page about my father. My 1 a.m. message for my husband will be that the Federal Government HAS to give all the money they can or cannot spare to subsidize the arts. Perhaps a slight prod will be to tell him that Governor Rockefeller has done it in New York, but he cares just as much, and as you and he have ample evidence that I am all for the arts but not very efficient. Couldn't you please produce some magic bill that we can give to a Senator to introduce that will make it all happen. You see you have accomplished miracles, so now everyone expects them from you. Please forgive this embarrassing shortage of writing paper in transit." The first lady was a major patron of the arts, and greatly admired what had been accomplished in New York with the Lincoln Center.

A third note, unsigned and unfinished, is to "Mr. Hill," the Secret Service agent Clinton J. 'Clint' Hill, concerning Marshall Hawkins' unapproved sale of a photograph to Life Magazine: "I see wicked Marshall Hawkins again sold a picture to LIFE—Will you have Pam tell them when she gets back—that in future—if." This may refer to Hawkins's photograph of Mrs. Kennedy's taking a dive from horseback over a fence during a fox hunt in 1962.

The final two pages bear short notes, "Bucher—Gove intern, S.S. man last nite—Caroline?" and "J. Q. Adams, Jules Verne Book." In overall very good to fine condition, with creasing to a few of the letters, a couple of light stains, and a significant tape-repaired tear to the page written to Rockefeller. Provenance: Violet A. Gaspar, Housekeeper at Hammersmith Farm, Bonhams, 2017.