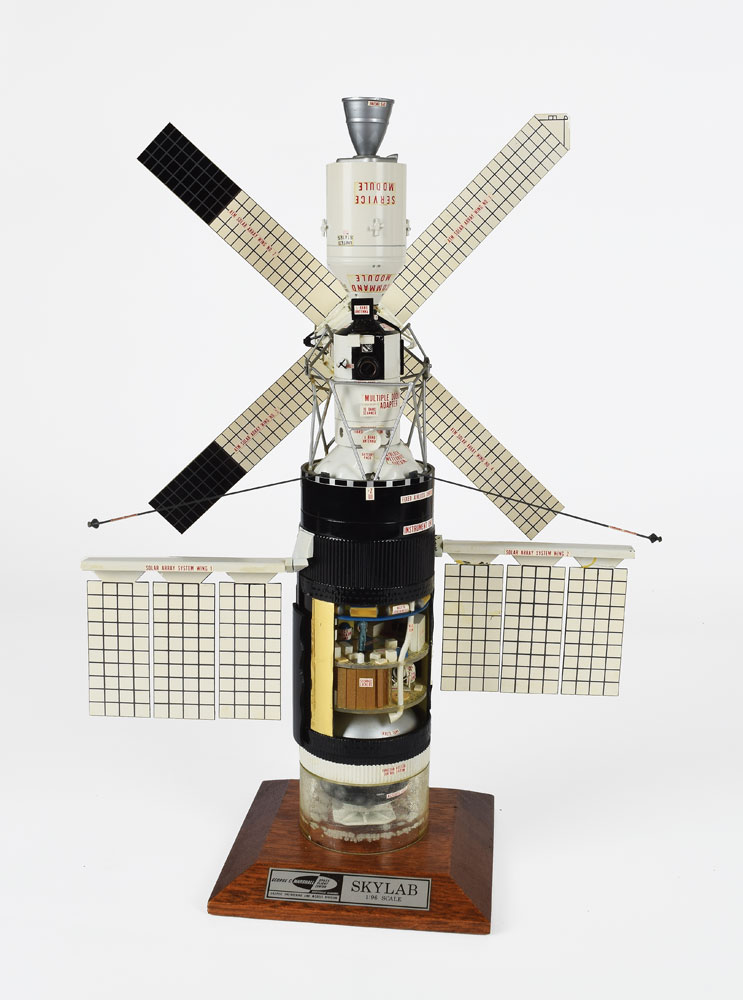 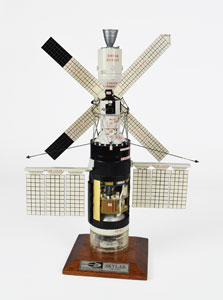 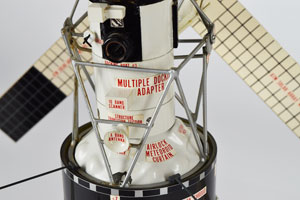 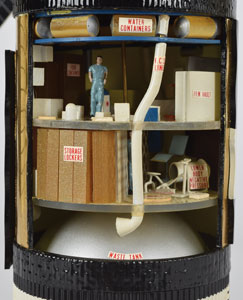 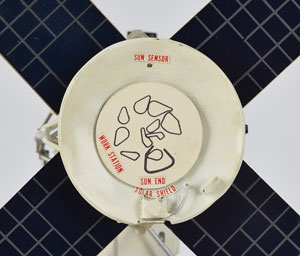 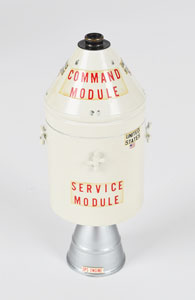 Amazing vintage 1:96 scale engineering model of the Skylab space station designed by the Graphic Engineering and Models Division at the George C. Marshall Space Center. The model measures approximately 16 x 11.75 with its six solar array panels fully extended. All the parts of the model are labeled as to function, with main body featuring cutaway sections to display interior of the space station, showing miniature parts like the waste tank, storage lockers, ergometer, and even a pair of .75″ tall astronauts. The model is set on a 5.5 x 5.5 wooden base with affixed plates to front and back, with the latter reading: “MSFC, 77047.” Includes the original custom foam-lined 15.75 x 8 x 10.75 suitcase, with a “Skylab No. 245” sticker to front. In very good to fine condition, with scattered light wear, instances of chipped paint, and abrasions, none of which detract from the otherwise impressive display.

The space station was launched May 14, 1973, and was visited by three astronaut crews: SL-2 with Charles Conrad, Paul Weitz, and Joe Kerwin, a team that spent twenty-eight days aboard; SL-3 with Alan Bean, Jack Lousma, and Owen Garriott, a team that spent fifty-nine days aboard; and SL-4 with Jerry Carr, Bill Pogue, and Ed Gibson, a team that spent eighty-four days aboard; Skylab 4’s human time spent in orbit eclipsed the previous record set by the Soyuz 11 crew. Due to greater-than-expected solar activity in 1977, the Skylab station's parking orbit started deteriorating sooner than expected and it crashed back to Earth on July 11, 1979, with the debris landing in Western Australia. A tremendous early model of America’s famed orbital station.

Due to the size, weight, and/or fragile nature of this item, we ask that you call RR Auction for a shipping quote.