Ike edits "A Balance Sheet on Bombing" and "Negotiations: Hopes and Realities"—articles on America's policy in Vietnam 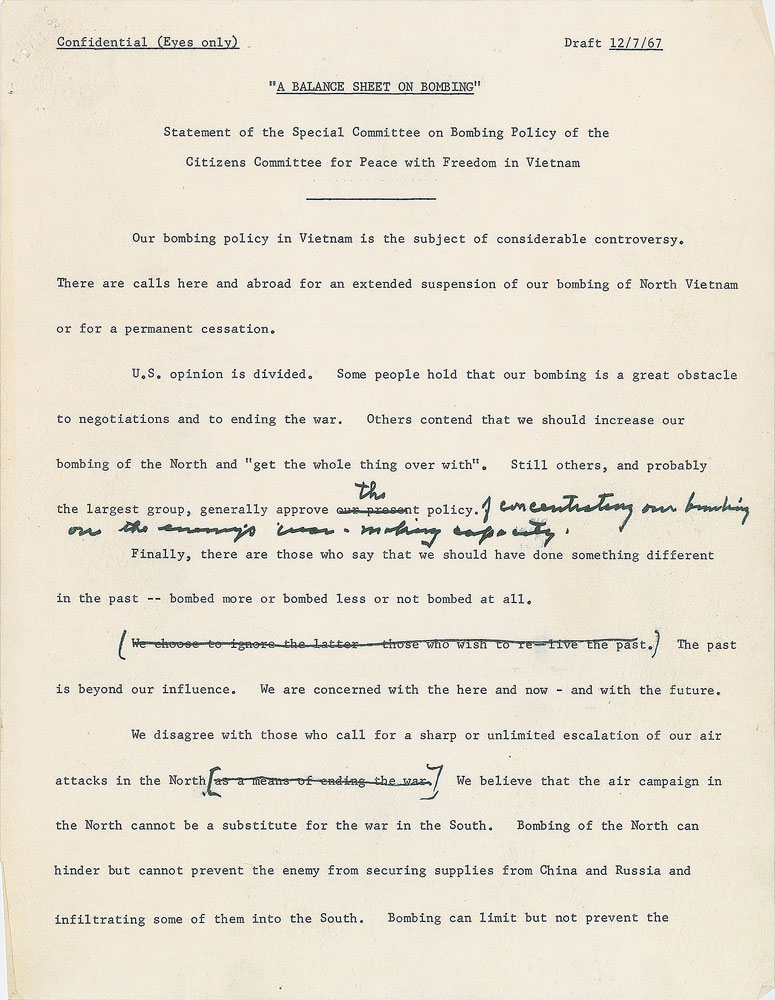 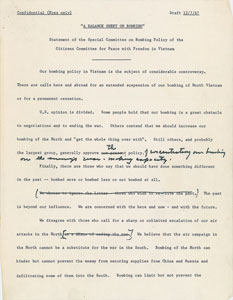 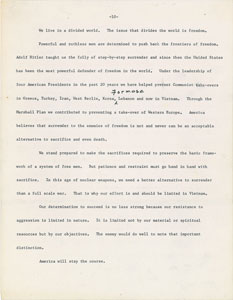 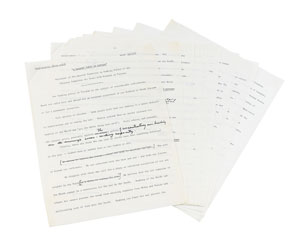 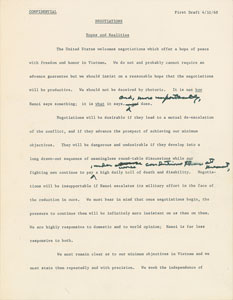 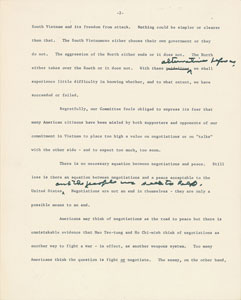 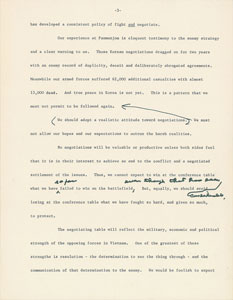 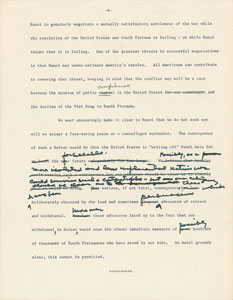 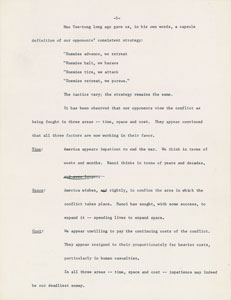 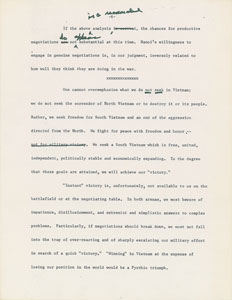 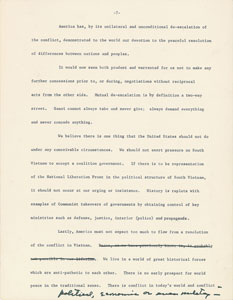 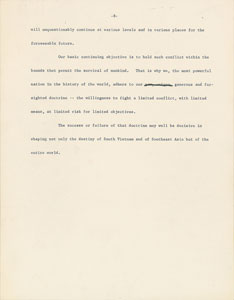 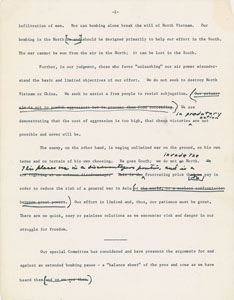 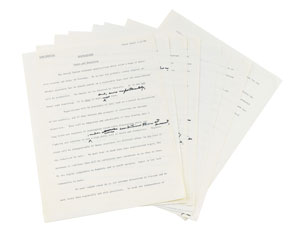 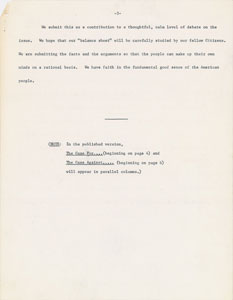 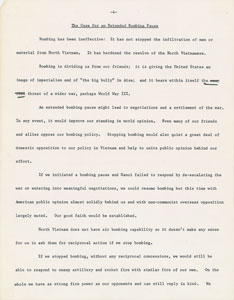 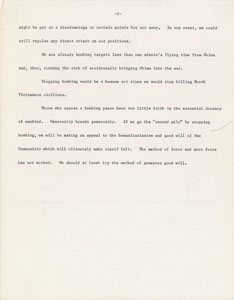 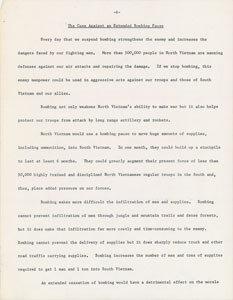 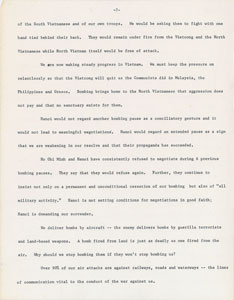 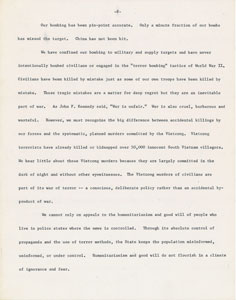 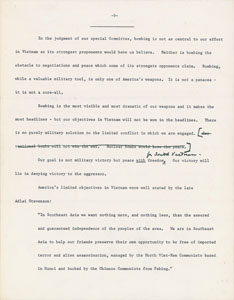 Ike edits "A Balance Sheet on Bombing" and "Negotiations: Hopes and Realities"—articles on America's policy in Vietnam

Two hand-edited typed manuscripts for articles entitled "A Balance Sheet on Bombing" and "Negotiations: Hopes and Realities," comprising 18 pages, 8.5 x 11, dated 1967-1968. Eisenhower makes various corrections, emendations, and deletions throughout the texts, amounting to more than 90 words in his hand.

The first is entitled "A Balance Sheet on Bombing," ten pages, marked "Confidential (Eyes only)" and "Draft 12/7/67." Eisenhower's changes amount to over 30 words in his hand. Headed, "Statement of the Special Committee on Bombing Policy of the Citizens Committee for Peace with Freedom in Vietnam," the piece begins (Eisenhower's handwritten notations in italics): "

Our bombing policy in Vietnam is the subject of considerable controversy. There are calls here and abroad for an extended suspension of our bombing of North Vietnam or for a permanent cessation. U.S. opinion is divided. Some people hold that our bombing is a great obstacle to negotiations and to ending the war. Others contend that we should increase our bombing of the North and 'get the whole thing over with.' Still others, and probably the largest group, generally approve the policy of concentrating our bombing on the enemy's war-making capacity."

The article continues: "In our judgment, those who favor 'unleashing' our air power misunderstand the basic and limited objectives of our effort. We do not seek to destroy North Vietnam or China. We seek to assist a free people to resist subjugation...We are demonstrating that the cost of aggression is too high, that cheap victories in predatory action are not possible and never will be. The enemy, on the other hand, is waging unlimited war on the ground, on his own terms and on terrain of his own choosing. He goes South; we do not invade the North. This places us in a disadvantageous position, and is a frustrating price to pay in order to reduce the risk of a general war in Asia."

The remainder of the article, more sparsely annotated by Eisenhower, contains the "balance sheet" of pros and cons prepared by the committee: pieces entitled "The Case for an Extended Bombing Pause" and "The Case Against an Extended Bombing Pause," intended to be printed side-by-side in columns. Eisenhower's most substantial edit to these sections comes in the "Case Against," in which he deletes the line, "Conventional bombs will not win the war. Nuclear bombs would lose the peace," and makes an addition at the end of the sentence, "Our goal is not military victory but peace with freedom for South Vietnam."

The second is entitled "Negotiations: Hopes and Realities," eight pages, 8.5 x 11, marked "Confidential" and "First Draft 4/10/68." Eisenhower's changes amount to over 60 words in his hand. The piece begins (Eisenhower's handwritten notations in italics): "The United States welcomes negotiations which offer a hope of peace with freedom and honor in Vietnam. We do not and probably cannot require an advance guarantee but we should insist on a reasonable hope that the negotiations will be productive. We should not be deceived by rhetoric. It is not how Hanoi says something; it is what it says. And, more importantly, does. Negotiations will be desirable if they lead to a mutual de-escalation of the conflict, and if they advance the prospect of achieving our minimum objectives. They will be dangerous and undesirable if they develop into a long drawn-out sequence of meaningless round-table discussions while our fighting men continue to pay, under worse conditions than at present, a high daily toll of death and disability."

His most substantial edits come on page four, in which he revises much of a paragraph: "We must unceasingly make it clear to Hanoi that we do not seek nor will we accept a face-saving peace or a camouflaged surrender. The consequence of such a defeat would be that the United States is 'writing off' South Asia for the foreseeable future. Possibly, as a more isolated and less influential nation we could survive such a catastrophe—but...should be clear as to these serious, if not fatal, consequences which have been deliberately obscured by the loud and sometimes persuasive advocates of retreat and withdrawal. Moreover, these advocates faced up to the fact that our withdrawal, in defeat, would mean the almost immediate massacre of possibly hundreds of thousands of South Vietnamese who have stood by our side. On moral grounds alone, this cannot be permitted."

The article closes: "America must not expect too much to flow from a resolution of the conflict in Vietnam...We live in a world of great historical forces which are anti-pathetic to each other. There is no early prospect for world peace in the traditional sense. There is conflict in today's world and conflict—political, economic or even military—will unquestionably continue at various levels and in various places for the foreseeable future. Our basic continuing objective is to hold such conflict within the bounds that permit the survival of mankind. That is why we, the most powerful nation in the history of the world, adhere to our generous and far-sighted doctrine—the willingness to fight a limited conflict, with limited means, at limited risk for limited objectives. The success or failure of that doctrine may well be decisive in shaping not only the destiny of South Vietnam and of Southeast Asia but of the entire world." In overall fine condition.