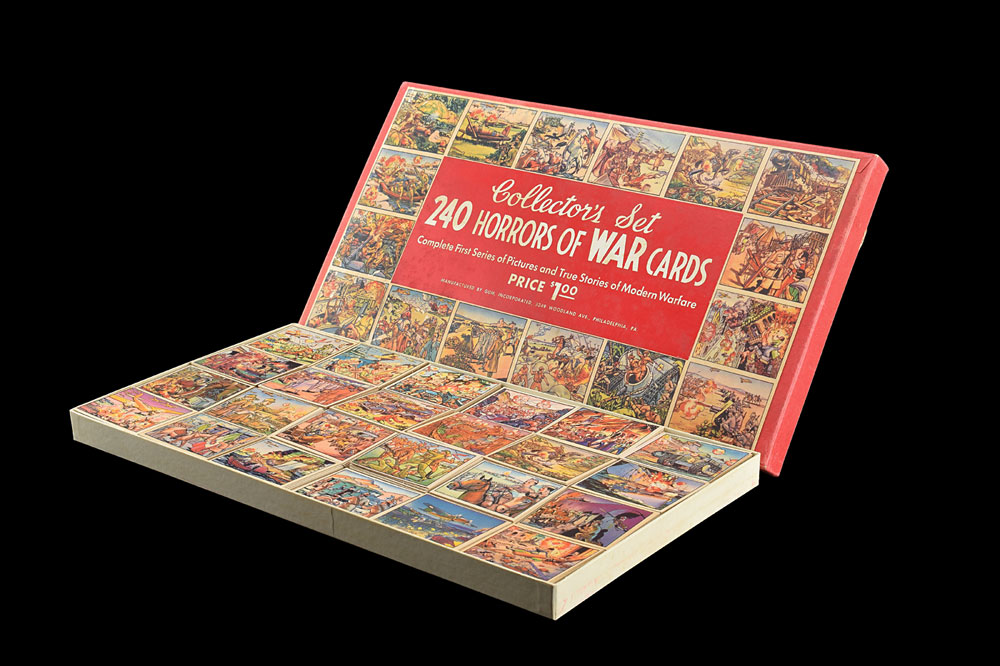 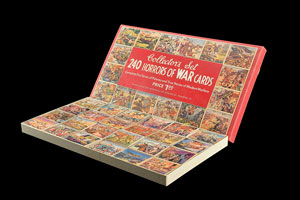 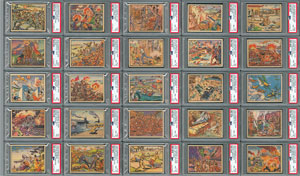 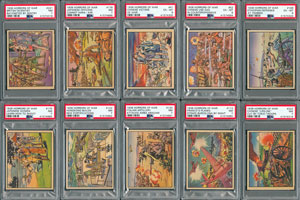 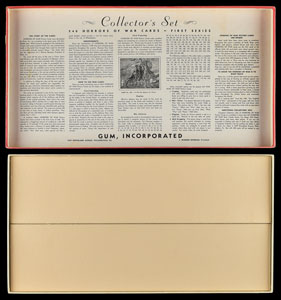 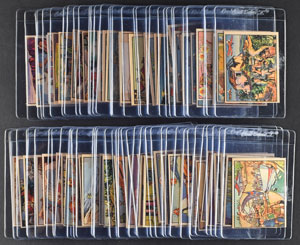 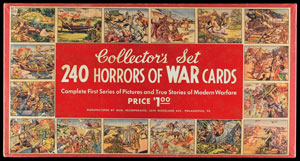 The 1938 Horrors of War set is one of the most famous non-sport card sets ever issued, depicting current events of three early battles, complete with gruesome detailed drawings of battlefield, blood, destruction and death. In addition, fascinating propaganda-type descriptions of these events were meant to capture the attention of the young boys this set was targeted. Yes, little boys paying hard-earned cash for the right to read about the ravages of war…all while chewing on a stick of bubble gum! Originally planned as a 240 card set, the rise of Adolf Hitler prompted the issuers to release another 48 cards, later in the conflict of World Events.

However, while these cards were issued in the customary unopened packs, this offered 'low number' set is what was issued in the original box sold in department stores. Measuring 20 x 10.75 inches, the 1938 Gum, Inc. "Horrors of War" display box is very rare, and very unique in that it was designed with an actual uncut sheet of 24 cards from the issue on the lid, with a bright red advertisement pasted in the middle. Under the lid has more "Horrors of War" descriptions, games which can be played with the cards and an introduction to card collecting...which is becoming a "national fad." The box is in very nice condition, likely one of the highest grade Horrors of War original boxes in the entire hobby. While there is some light edge wear and some staining, each of the four corners of the lid and bottom of the box is perfectly complete without any cracks, tears or splits. The box displays beautifully, is bright in appearance, and is in Excellent to Mint overall condition.

Gum, Inc.’s “Horrors of War” is arguably the single most important non-sport card set ever issued. We present the original 240 card set in high grade form, with 41 of these FRESH TO THE HOBBY cards graded by PSA. The balance of the cards have that factory fresh look, but some also have those factory fresh faults: a few miscut cards and some with light edge ridges. In addition, while all have original cuts, some cards were produced shorter than the standard with even several are oversized.

As stated above, the balance of the set is in all original condition, with a portion of the cards having some factory fault issues. Balance grades an overall EX to NM, with some lesser due to a about a dozen with corner dings. Almost all cards have four sharp corners and a factory fresh appearance with bright colors, smooth edges and clean surfaces.