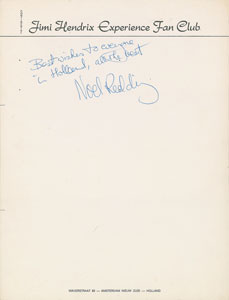 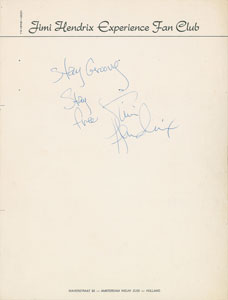 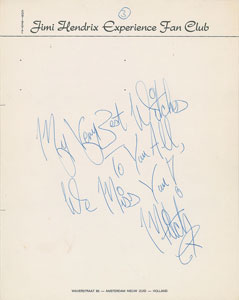 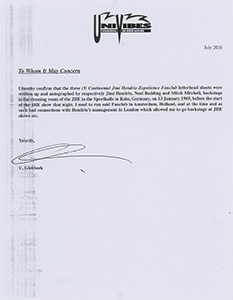 Extremely desirable set of three bold ballpoint signatures of the Jimi Hendrix Experience, "Stay Groovy, Stay free, Jimi Hendrix," "Best wishes to everyone in Holland, all the best, Noel Redding," and "My Very Best Witches To You All, We Miss You! Mitch, X," on individual off-white 8.75 x 11.5 sheets of Jimi Hendrix Experience Fan Club stationery, with lower border listing fan club address as "Waverstraat 83—Amsterdam Nieuw Zuid—Holland." In overall fine condition, with a bit of trivial creasing, and a very small tear to the right edge of the Hendrix sheet (far from and in no way affecting the signature). Accompanied by a letter of provenance from Caesar Glebbeek and a certificate of authenticity from Tracks, stating that the autographs were obtained backstage at the Koln Sporthalle in Germany on January 13, 1969.

The signatures were obtained by noted Jimi Hendrix archivist and biographer Caesar Glebbeek at the Sporsthalle in Koln, Germany, on January 13, 1969. Caesar is the founder of the Jimi Hendrix Information Center in Amsterdam, co-author of the Hendrix biography Electric Gypsy, and long recognized as a premier Hendrix expert. He also ran the Continental Jimi Hendrix Fan Club circa August 1967 through July 1971, from where these printed letterheads originate. Caesar mentioned that before the concert he ventured backstage and asked for Gerry Stickells (Jimi’s road manager), who brought him to the dressing rooms where Jimi, Mitch, and Noel were. There, the band chatted, mingled, and signed various items for him.

A review of Jimi and the Experience’s concert in Koln by Wolfgang Jansen appeared in a local newspaper, headlined: ‘Jimi raged about at the Sporthalle like a torero’ and ‘5,000 fans stamped like bulls.’ Jansen observed: ‘About 5,000 fans screamed their throats hoarse last Monday evening during a one hour non-stop show by the Jimi Hendrix Experience. ‘Jimi, Jimi,’ the Sporthalle roared and the thunderous applause would not come to an end. No doubt this was the hottest and at the same time the loudest show that the ‘Halle’ in Koln had experienced in its existence. Psychedelic king Jimi Hendrix and his Experience provided an evening of superlatives, one in which the Rhine district would not forget very quickly.’