Extensive archive revealing the Marquis de Lafayette's thoughts on the military, politics, and change in France 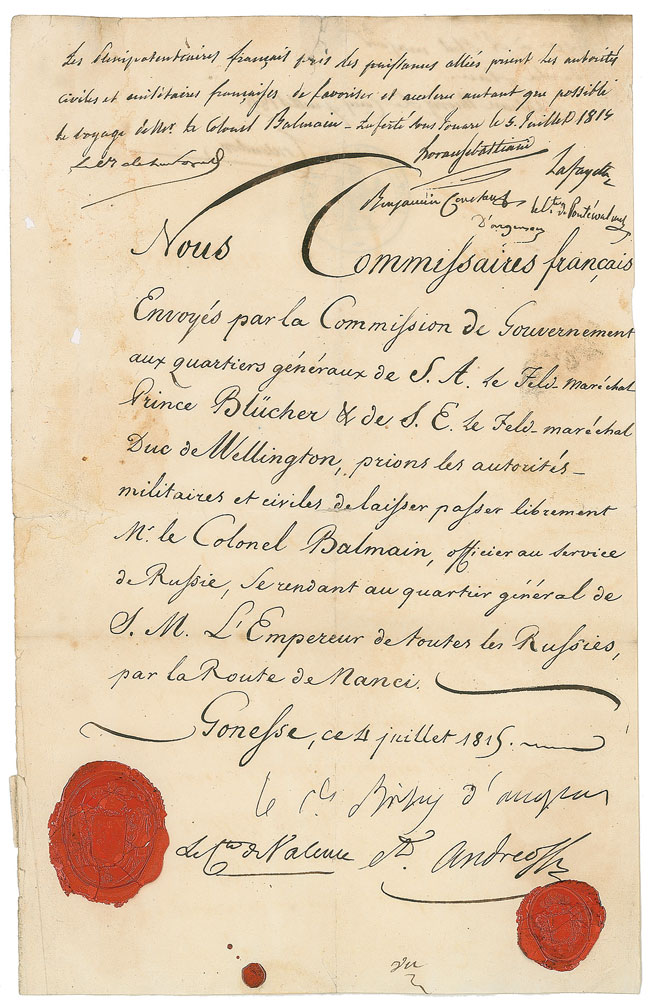 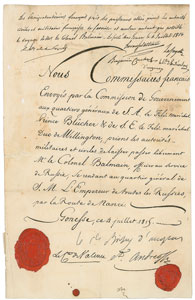 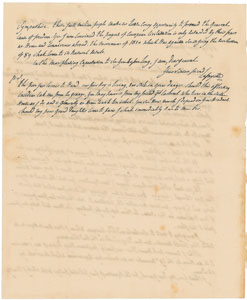 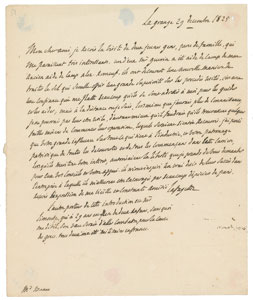 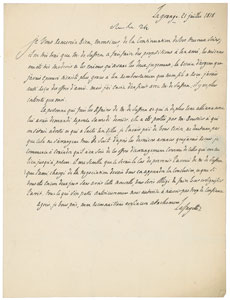 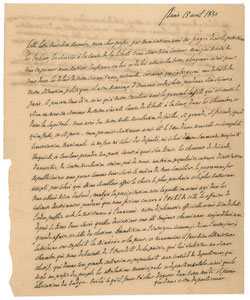 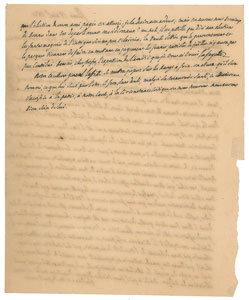 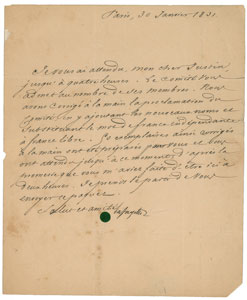 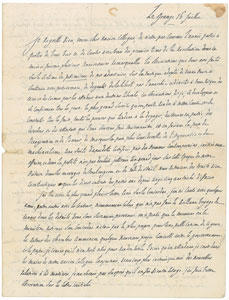 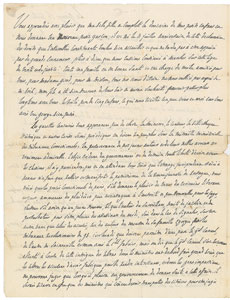 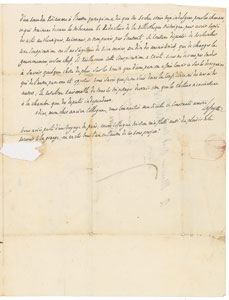 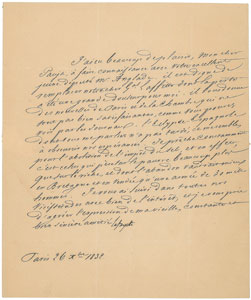 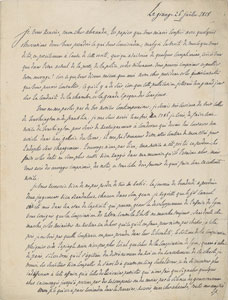 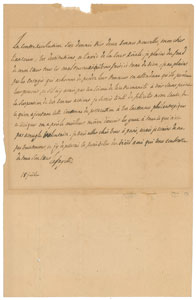 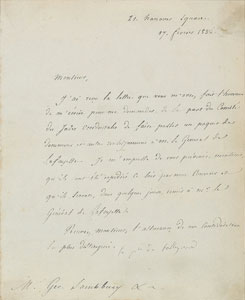 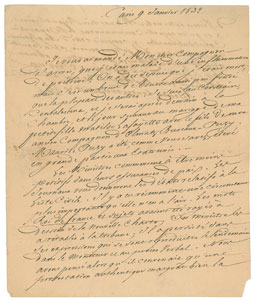 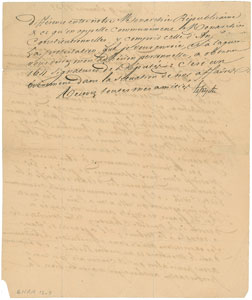 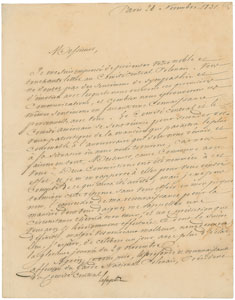 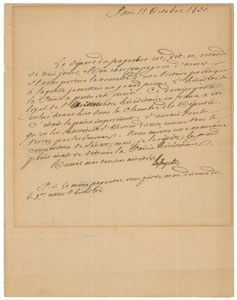 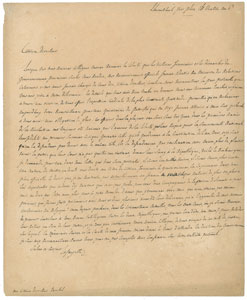 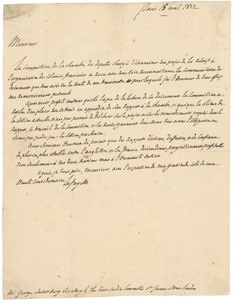 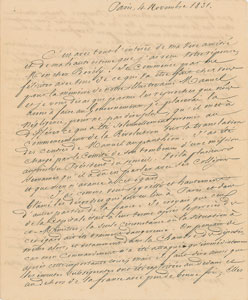 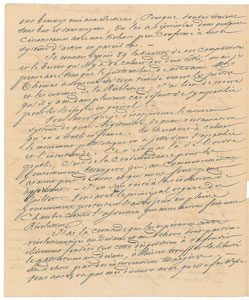 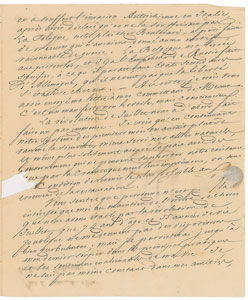 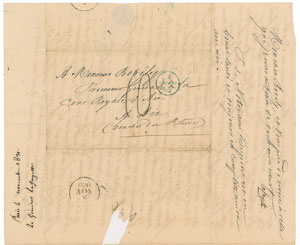 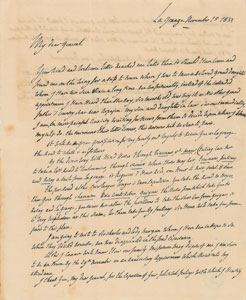 Extensive archive revealing the Marquis de Lafayette's thoughts on the military, politics, and change in France

Extraordinary archive of 18 letters and documents, including 11 ALSs by Lafayette, a DS by Lafayette, 5 LSs by Lafayette, and an LS by Charles Maurice de Talleyrand (mentioning Lafayette). The exceptional archive spans two decades, and in it, Lafayette discusses major political events and articulates his support for constitutional principles.

A sampling of the archive:

In one letter, he appeals to the President of the Directory from exile, in part (translated): “To see again the homeland which their hearts never left for an instant, to give their blood to the Republic—this is the happiness for which I ask for them…it would be against my reason, it would be even further against my nature, to doubt my rights to the title of French citizen. When…the government expressed the wish that I should not return to France at present, did they not also authorize me to submit to them that the right to return, which is not lost to my two companions of the prison of Amutz [sic] and to myself, should not be lost to the small number of friends, which I took with me, who were taken prisoner with us and several of whom owed their freedom only to the arrival of our victorious armies in Belgium?” With the downfall of the French in 1792, the Commune, in establishing a Republic, perceived the attitude of Lafayette as a dangerous conflict to their aims. Accused of treachery, he fled from France and was captured by Austrian troops. He remained a prisoner of state until 1797, when Napoleon stipulated his release in the Treaty of Campo; Lafayette returned to France in 1799.

A manuscript DS endorsed at the head by Lafayette, one page, July 4, 1815, discussing a safe conduct pass for Colonel Balmain, an officer in the Czar’s service, issued by the Commissaires Francais at the Headquarters of His Highness Field-Marshal Prince Blucher and Field Marshal the Duke of Wellington. Dating to less than three weeks after the Battle of Waterloo, the pass allows Balmain to travel to the Czar’s headquarters. The endorsement is signed by Lafayette, Horace Sebastiani, Benjamin Constant, and three others; the main document is signed by Boissy d’Anglas, Andreossy, and de Valence. The Battle of Waterloo, fought on June 18th, was Napoleon Bonaparte’s final defeat, ending two decades of warfare between the French and British.

A letter of July 21, 1818, outlines the legal and financial woes that followed the death of Lafayette’s wife.

In a letter of July 18, [1825] to the social reformer le duc de la Rochefoucauld-Liancourt, Lafayette discusses the counter-revolution, (translated): “I pity from the bottom of my heart all those needy people to whom you did so much good, but I certainly don’t pity the fanatics who are definitely losing their honor and will soon lose their power.” Known for his liberal attitudes, Rochefoucauld-Liancourt established a model farm on his estate and founded a school for the children of impoverished military personnel.

In an undated letter, likely from the reign of Charles X, Lafayette writes (translated): “The comments which you made about the pessimistic system of our opponents, about the tactic, adopted early, of persistently strengthening a disgust for liberty by anarchy and of inciting, at great risk, excesses and crimes in order to attribute them to liberal ideas—these comments…are enlarged and confirmed every day.” When the chamber of 1830 opposed King Charles X, he dissolved it, only to find the succeeding chamber even more uncompromising. His response—the suspension of the constitution—led to the July Revolution, resulting in his abdication and exile.

In a letter of November 4, 1831, Lafayette discusses issues related to the July Revolution and events in Europe. In part (translated): “One thought similarly then and notably in the Chamber of Deputies, for my command didn’t come under fire until immediately after this important crisis; but it must also be said that the subsequent riots were exploited within and outside of France with little good faith; they damaged the elections greatly; almost all were without a goal and without means; they were put down with a violence scarcely conforming to my system of action in such cases.” He talks about “calming both sides” and how he “disapproves of the new system of quasi-legitimacy, of quasi-restoration which has been established in France.”

The last letter, dated November 15, 1833, is in English and concerns encouraging the “general cause of freedom.” After a lengthy discussion of the illness of his great-grandson and detailed instructions on how to get from Paris to LaGrange, he writes: “I thank you, my dear general, for the expression of your political feelings, with which I heartily sympathize. Those faite milieu people make us look for every opportunity to forward the general cause of freedom. Yet I am convinced the progress of European civilization is only retarded by their fears at home and their connivance abroad. The movement of 1830 which has again the revolution of 89 shall come to its natural result.” During the Revolution of 1830, Lafayette was made commander-in-chief of the National Guard. In overall very good to fine condition. A fine and insightful collection of letters revealing Lafayette's involvement in the monumental sociopolitical changes of the late 18th and early 19th centuries.