To her Air Force One consoler: "We shared hours on it that will haunt us all our lives, those last hours. At his funeral when it flew over so low—I will never forget it" 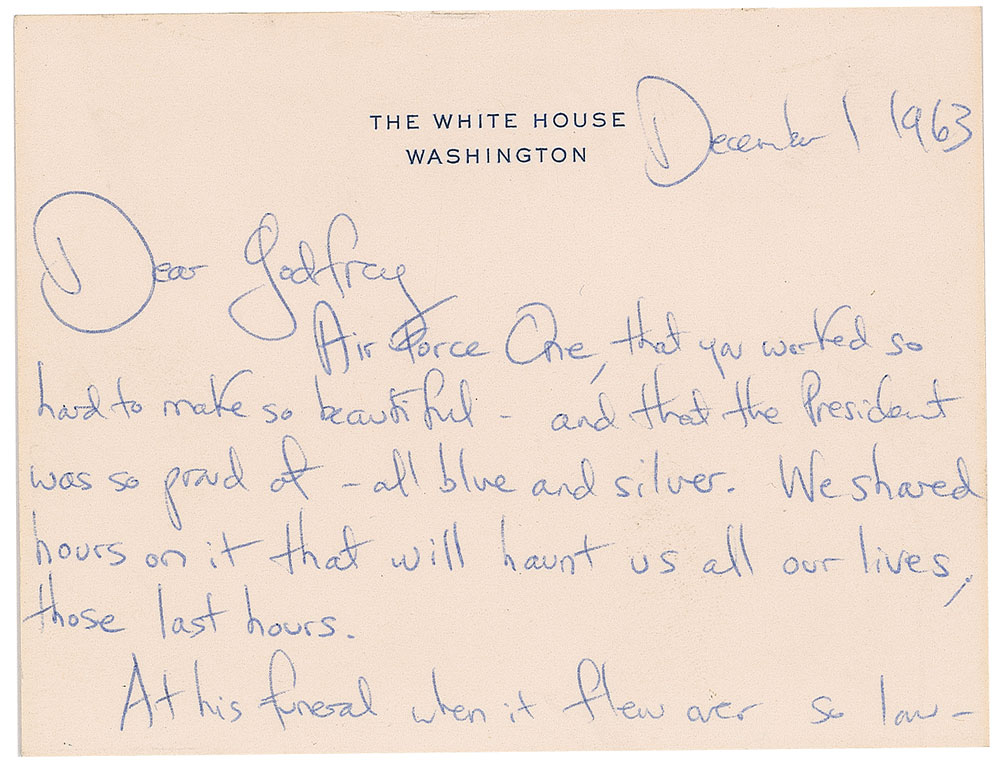 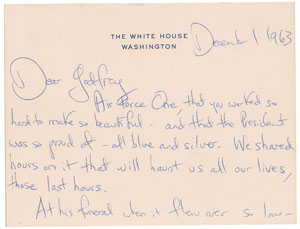 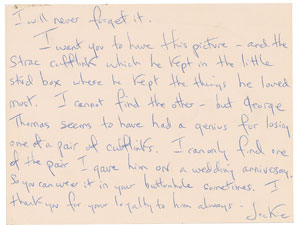 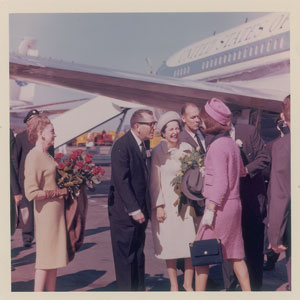 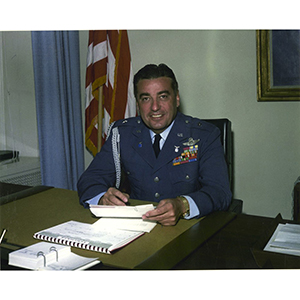 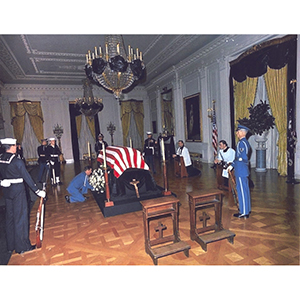 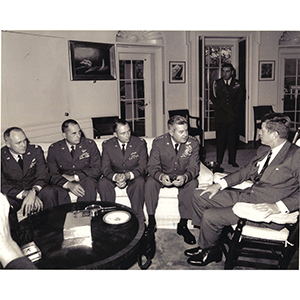 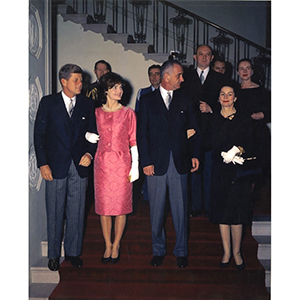 To her Air Force One consoler: "We shared hours on it that will haunt us all our lives, those last hours. At his funeral when it flew over so low—I will never forget it"

Remarkable ALS signed “Jackie,” one page both sides, 4.5 x 3.5, White House stationery card, December 1, 1963. Letter to Godfrey T. McHugh, the military aide to President John F. Kennedy, written just nine days after the assassination and six days after JFK’s burial. In order to fully appreciate the content of this note containing Jackie’s raw first person observations of the horrific hours she spent aboard Air Force One on that infamous November day, it's important to understand the back story. Brig. Gen. Godfrey McHugh not only served as JFK's trusted Air Force attaché, but had dated Jackie before she met the future president. Jackie trusted McHugh and he became her chief protector and consoler onboard Air Force One that day. There was great tension on the plane since LBJ wanted to delay take off in order to be sworn in by his life-long Texan friend Judge Sarah Hughes. JFK’s staff wanted to get it airborne as soon as possible because they worried that the Dallas coroner might show up to claim the slain presidents body for the Dallas morgue. Amidst this turmoil, LBJ was panicking behind closed doors due to his fear that a wider conspiracy might be targeting him as well. McHugh had to calm LBJ down while also attending to Jackie.

Kennedy's casket had been placed in the rear compartment. When the president's plane finally reached flying altitude, Mrs. Kennedy left her bedchamber and walked to the rear compartment to take a seat beside the coffin. There she remained throughout the flight. Jackie's vigil was shared at times by four staff members close to the slain chief executive—Dave Powers, Kenny O'Donnell, Lawrence O'Brien, and Godfrey McHugh. McHugh later knelt beside Jackie and asked if she’d like to change clothes before landing. She said what she had said in Dallas: ‘No, let them see what they’ve done.’ She already regretted wiping the blood away earlier: ‘If I’d just had the blood and caked hair on my face when [Cecil Stoughton] took the picture…I should have kept the blood on.’

In full: "Air Force One, that you worked so hard to make so beautiful—and that the President was so proud of—all blue and silver. We shared hours on it that will haunt us all our lives, those last hours. At his funeral when it flew over so low—I will never forget it. I want you to have this picture—and the Strac cufflink which he kept in the little stud box where he kept things he loved most. I cannot find the other—but George Thomas seems to have had a genius for losing one of a pair of cufflinks. I can only find one of the pair I gave him on a wedding anniversary. So you can wear it in your buttonhole sometimes. I thank you for your loyalty to him always—." In very fine condition.

Also includes an original vintage color glossy 5 x 5 photo of First Lady Jacqueline Kennedy with Lady Bird Johnson on the tarmac in front of Air Force One during the fateful Dallas trip on November 22, 1963, taken by official White House photographer Cecil W. Stoughton. Reverse bears "A Kodak Paper" watermarks and pencil notations, "C420-15-63, 0A6593." This photograph derives from Stoughton's personal collection, and was retained by him as his own file copy (Provenance: The Estate of Cecil W. Stoughton, Bonhams).

Accompanied by four other modern glossy reprint photos of McHugh: one posing at his desk, another of him kneeling at the casket of President Kennedy, and two others of McHugh overseeing an oval Office meeting and a social event attended by the Kennedys and Johnsons. A decorated US Army Air Forces veteran of World War II, McHugh became Air Force Aide to President Kennedy and was promoted to Brigadier General in 1961. In addition to supervising Air Force One, McHugh often rode in the presidential state car; however, on the day of Kennedy's assassination, McHugh was moved to the rear of the motorcade in a last-minute change, seated instead in the VIP car with presidential military aid Ted Clifton and Julian Reed, Governor John Connolly's Press Secretary. On the day’s sad flight from Dallas’ Love Field to Andrews Air Force Base in Washington, McHugh stood guard by the president's casket in the rear of Air Force One, and then, upon landing, rode with the president's body, Mrs. Kennedy, and Robert Kennedy in an ambulance to the Bethesda Naval Hospital, where the autopsy was performed.

The White House had entered the jet age under President Kennedy, with the acquisition of the specially configured Boeing SAM 26000 in 1962—on the advice of his wife and the designer Raymond Loewy, he had the fuselage painted in the now-iconic “blue and silver” that Jackie references here. At Kennedy’s funeral, Air Force One soared over Arlington National Cemetery and tipped its wings in salute before leaning into the wind at a blistering 600 miles per hour.

Written just nine days after the loss of her husband, this letter represents the grace and courage displayed by Jacqueline Kennedy throughout the entirety of her tenure as first lady of the United States—she would remain in the White House until December 6th, packing up the family’s belongings with the help of her sister Lee Radziwill and sister-in-law Pat Lawford, while working alongside Lady Bird as she and her husband transitioned into the White House. As a letter written by Jackie in the immediate aftermath of the assassination to an important aide who shared her tragic experience, this stands as a truly incredible Kennedy item—one in which she recounts the horrific flight from Dallas to Washington and reflects upon the funeral that riveted not only America, but the rest of the world.