Immersed in his work on Nineteen Eighty-Four, Orwell offers an extraordinary autobiographical account: "I became infected with a horror of totalitarianism" 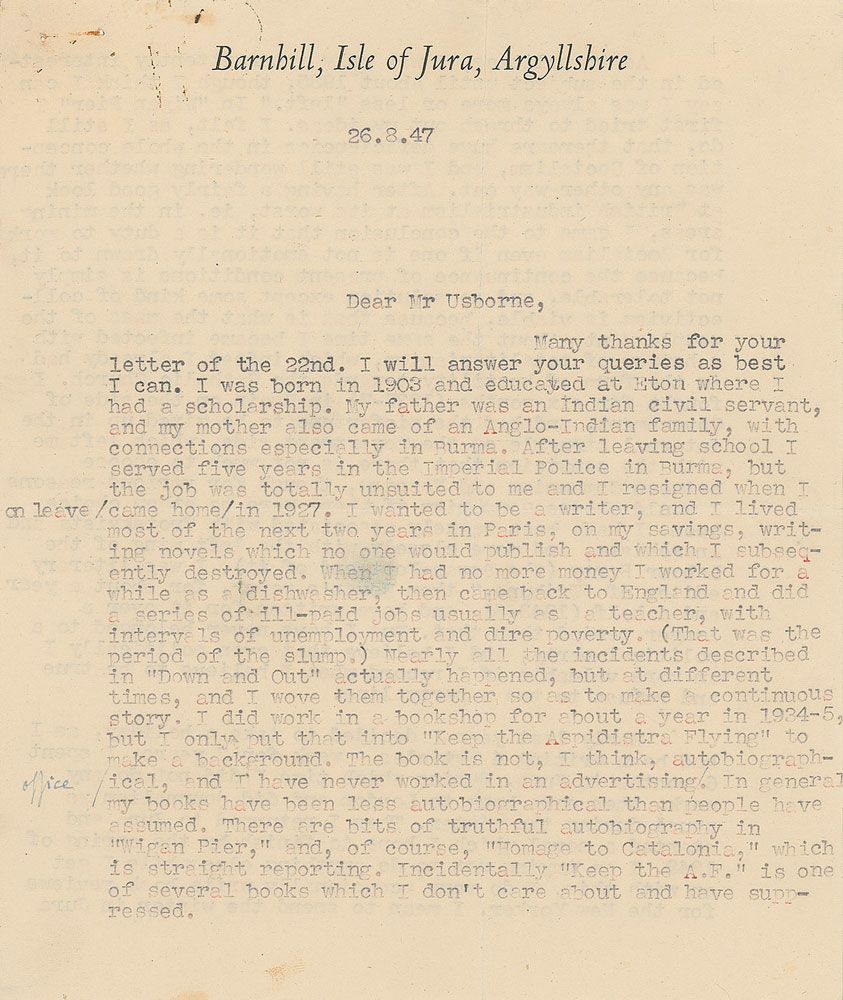 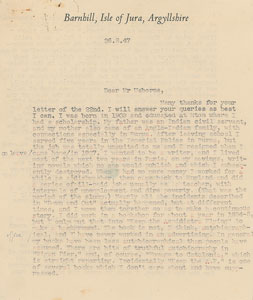 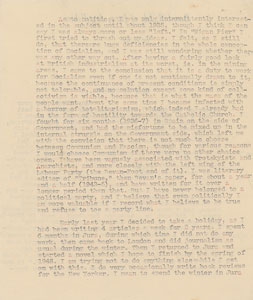 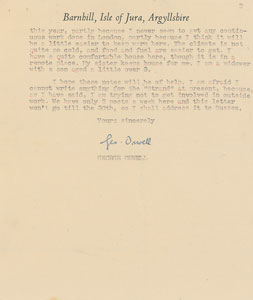 Immersed in his work on Nineteen Eighty-Four, Orwell offers an extraordinary autobiographical account: "I became infected with a horror of totalitarianism"

Important TLS signed "Geo. Orwell," three pages on two sheets, 6.75 x 8, Barnhill, Isle of Jura letterhead, August 26, 1947. Letter to editor Richard Usborne. In part: "After leaving school I served five years in the Imperial Police in Burma, but the job was totally unsuited to me and I resigned…I wanted to be a writer, and I lived most of the next two years in Paris, on my savings, writing novels which no one would publish and which I subsequently destroyed. When I had no more money I worked for a while as a dishwasher, then came back to England and did a series of ill-paid jobs usually as a teacher, with intervals of unemployment and dire poverty. (that was the period of the slump.) Nearly all the incidents described in 'Down and Out' actually happened, but at different times, and I wove them together so as to make a continuous story. I did work in a bookshop for about a year in 1934-5, but I only put that into 'Keep the Aspidistra Flying' to make a background. The book is not, I think, autobiographical, and I have never worked in advertising. In general, my books have been less autobiographical than people have assumed. There are bits of truthful autobiography in 'Wigan Pier,' and of course, 'Homage to Catalonia,' which is straight reporting. Incidentally, 'Keep the A. F.' is one of several books which I don't care about and have suppressed.

As to politics, I was only intermittently interested in the subject until about 1935, though I think I can say I was always more or less 'left.' In 'Wigan Pier' I first tried to thrash out my ideas. I felt, as I still do, that there are huge deficiencies in the whole conception of Socialism, and I was still wondering there was any other way out. After having a fairly good look at British industrialism at its worst, ie. in the mining areas, I came to the conclusion that it is a duty to work for Socialism even if one is not emotionally drawn to it, because the continuance of the present conditions is simply not tolerable, and no solution except some kind of collectivism is viable, because that is what the mass of people want. About the same time I became infected with a horror of totalitarianism, which indeed I already had in the form of hostility towards the Catholic Church. I fought for six months (1936-7) in Spain on the side of Government, and had the misfortune to be mixed up in the internal struggle on the Government side, which left me with the conviction that there is not much to choose between Communism and Fascism, though for various reasons I would choose Communism if there were no other choice open. I have been vaguely associated with Trotskyists and Anarchists, and more closely with the left wing of the Labour Party (the Bevan-Foot end of it). I was literary editor of 'Tribune,' then Bevan's paper, for about a year and a half (1943-5), and have written for it over a longer period than that. But I have never belonged to a political party, and I believe that even politically I am more valuable if I record what I believe to be true and refuse to toe a party line.

Early last year I decided to take a holiday, as I had been writing 4 articles a week for 2 years. I spent 6 months in Jura, during which time I did not do any work, then came back to London and did journalism as usual during the winter. Then I returned to Jura and started a novel which I hope to finish by the spring of 1948. I am trying not to do anything else while I get on with this. I do very occasionally write book reviews for the New Yorker. I mean to spend the winter in Jura this year, partly because I never seem to get any continuous work done in London, partly because I think it will be a little easier to keep warm here. The climate is not quite so cold, and food and fuel are easier to get. I have a quite comfortable house here, though it is in a remote place. My sister keeps house for me. I am a widower with a son aged a little over 3." In fine condition, with intersecting folds, one through a single letter of signature, and a rusty staple hole and paperclip mark to top left. First published in Orwell: A Life in Letters, edited by Peter Davison (2010).

Never entertaining the idea of writing an autobiography, Orwell was nonetheless aware of the fact that he could not prevent a biography from being written about him, and thus offered occasional facts about his own life and work to ensure that a biographer would at least 'get his dates right.' This letter to Richard Usborne, editor of the monthly literary periodical The Strand, is one of the most generous and comprehensive accounts of the author's life in his own words known to exist. Stepping away from his overwhelming amount of journalistic work—contributing to Tribune, The Observer, the Manchester Evening News, and countless small-circulation political and literary magazines—he moved to the solitary Barnhill farmhouse on the remote Scottish island of Jura to focus his full attention on writing Nineteen Eighty-Four. He stayed there intermittently from 1946 until his death in 1950.

Despite his claim that his books "have been less autobiographical than people have assumed," he goes on to provide a sketch of the formative events in his life that found their place among his illustrious writings-his time in the Burma police, which guided his first novel, Burmese Days; "the slump," with his "series of ill-paid jobs usually as a teacher, with intervals of unemployment and dire poverty" that helped form The Clergyman's Daughter; his brief employment at Booklovers' Corner, which provided the backdrop for his third novel, Keep the Aspidistra Flying. Most importantly, and with the most detail, he explains the development of his political beliefs, the driving force behind his most significant works, admitting that he "was only intermittently interested in the subject" of politics until 1935, when he experienced "British industrialism at its worst" in the mines of Lancashire. "Infected with a horror of totalitarianism, which indeed I already had in the form of hostility towards the Catholic Church" from his time fighting in the Spanish Civil War, he reached the difficult conclusion that "it is a duty to work for Socialism even if one is not emotionally drawn to it." This extraordinary autobiographical statement, written at the same time he was working on Nineteen Eighty-Four, discussing his own personal and political development at unprecedented length, is undoubtedly one of the finest Orwell letters in existence.