Train menu from A Hard Day's Night, signed crisply by the Beatles 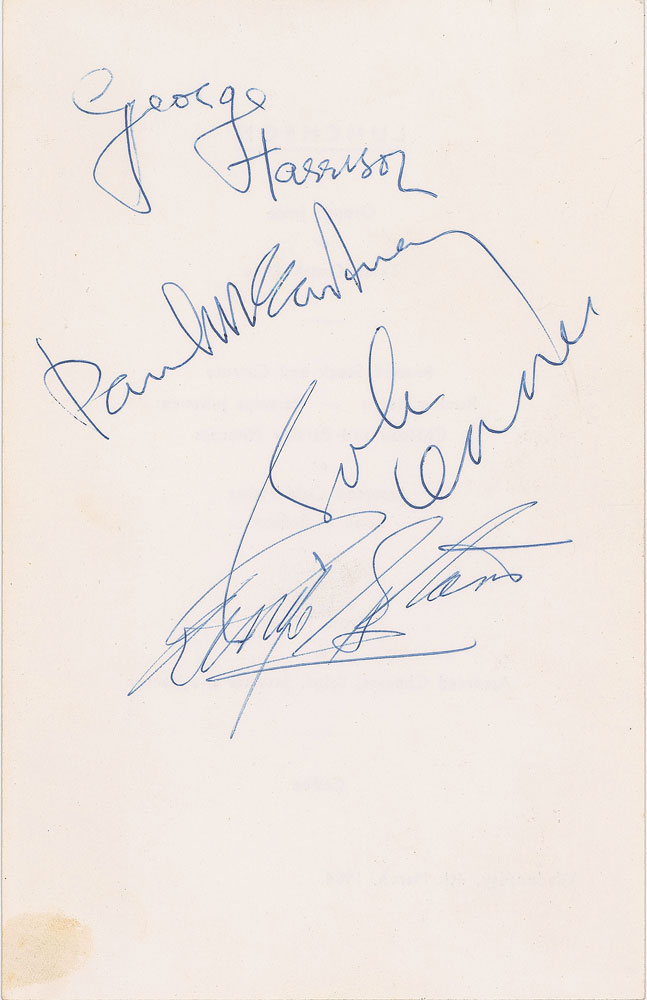 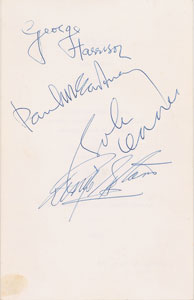 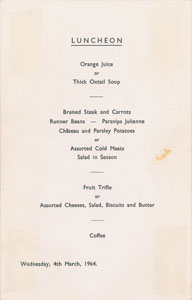 Train menu from A Hard Day's Night, signed crisply by the Beatles

Marvelous vintage ballpoint signatures of George Harrison, Paul McCartney, John Lennon, and Ringo Starr on the reverse of an off-white 4.5 x 7 luncheon menu from the specially hired train used for the opening sequences of the Beatles debut film A Hard Day's Night. The menu is dated "Wednesday, 4th March, 1964," which corresponds with the movie's third day of filming. In fine condition, with a light stain to the lower left corner, and to the reverse. Accompanied by a certificate of authenticity from Rockaway Records and a letter of authenticity from noted Beatles expert Frank Caiazzo, in part: "This is an absolutely stunning set of Beatles autographs, and each has signed as nicely as they could have on that day. Beatles autograph sets obtained during the filming of 'A Hard Day's Night' are extremely desirable, and this is one of the finest known to exist."

Also accompanied by a letter of provenance from the brother-in-law of the original recipient, in part: "In the film, the Beatles trip to London is made on a regular passenger train, but of course this particular train was hired especially for the filming…The Beatles signed the menu at the request of the railway marketing manager required to be present during filming. The menu has two food stains on it from the lunch. There is a stain on the front and what looks like a partial fingerprint on the back…The menu was raffled amongst railway office workers on behalf of the railway's benevolent fund, a charitable organization, which provides financial aid to railway workers and their families in need. The menu has been in the possession of the same family since it was won in the raffle in 1964. The menu was won in the raffle by the owners' brother in law, Lyn Chadwick, who worked for the railway company's marketing division in Cardiff, Wales, in the UK. Soon after the raffle, in 1964, Lyn and the current owners sister, Viv, (Lyn's wife), gave the menu to me, her brother…The menu has been in my possession since that time."