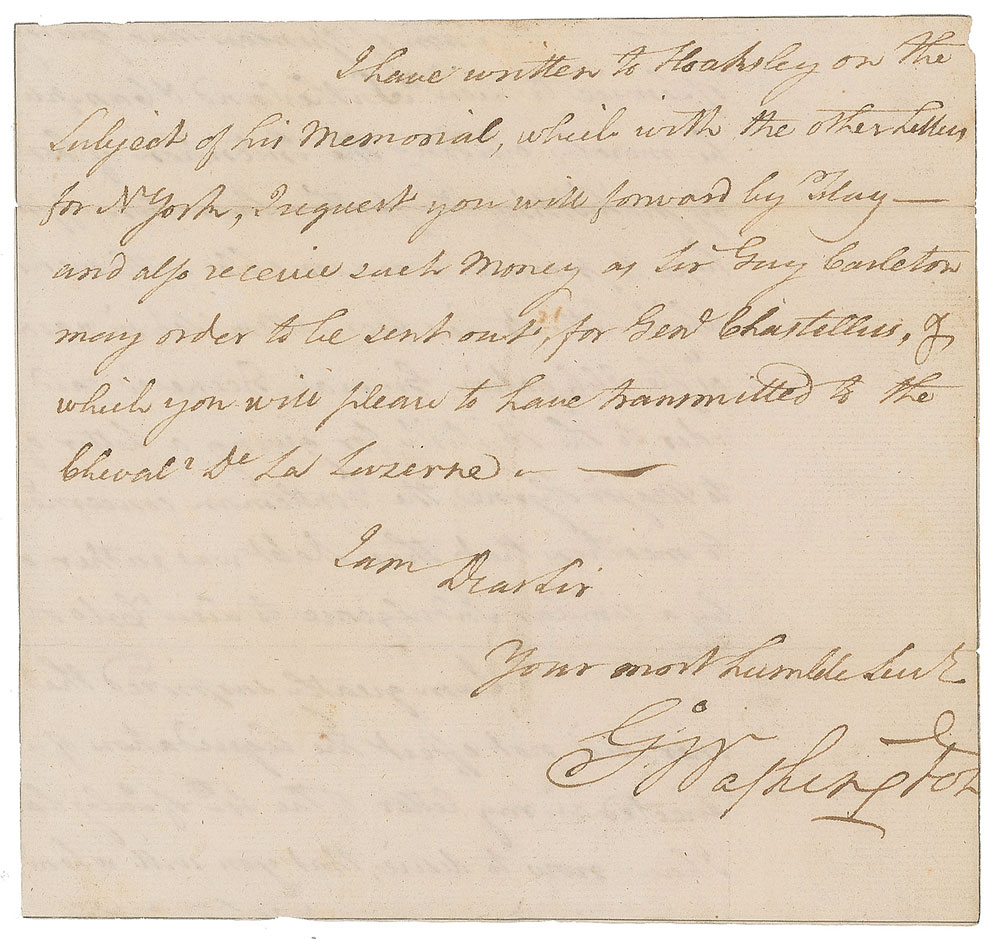 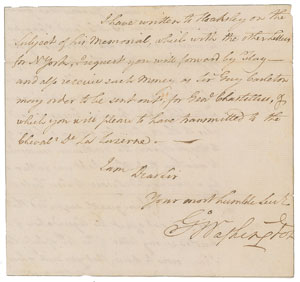 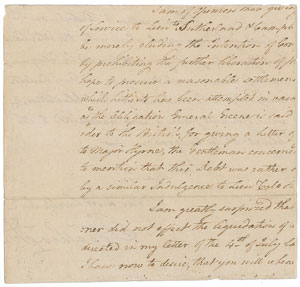 Revolutionary War-dated partial LS signed “Go: Washington,” one page both sides, 6.75 x 6.5, [March 3, 1783]. A portion of Washington's letter to William Stephens Smith, written from his headquarters at Newburgh. The letter concludes: "I have written to Hoaksley on the subject of his memorial, which with the other Letters for N. York, I request you will forward by Flag—and also receive such Money as Sir Guy Carleton may order to be sent out, for General Chattelus, & which you will please to have transmitted to the Cheval'r De La Luzerne."

The beginning of the letter, of which only portions remain on the opposite side, discussed Congress's prohibition of the liberation of British prisoners and the resolution of debts; the fragmented nature of what remains, which makes reference to General Nathanael Greene, can be completed with a transcript of the letter as it appears in Washington's papers. In fine condition, with trimming to the edges just impinging on the end of Washington's bold, clean signature. Accompanied by an unsigned engraving of Washington. Originally sold by Walter R. Benjamin Autographs, and includes the original paper folder as well as a letter from Mary A. Benjamin about the letter, stating, "Whoever cut it in half was a true vandal."

By this time in the American Revolution, hostilities were winding down and serious peace negotiations were beginning. The next month, on April 21st, Washington would send Guy Carleton, the commander of British forces, a copy of America's proclamation for the cessation of hostilities, informing him that all British prisoners would soon be released. The recipient of this letter, William Stephens Smith, had been appointed to Washington's staff in 1781, and he performed valuable service to the army's commander. Chief among Smith’s responsibilities was the supervision of the British evacuation of New York in accordance with the Treaty of Paris, which would be signed on September 3, 1783, officially ending the war. A superb, crisply signed Washington piece exemplifying his leadership during the Revolutionary War.