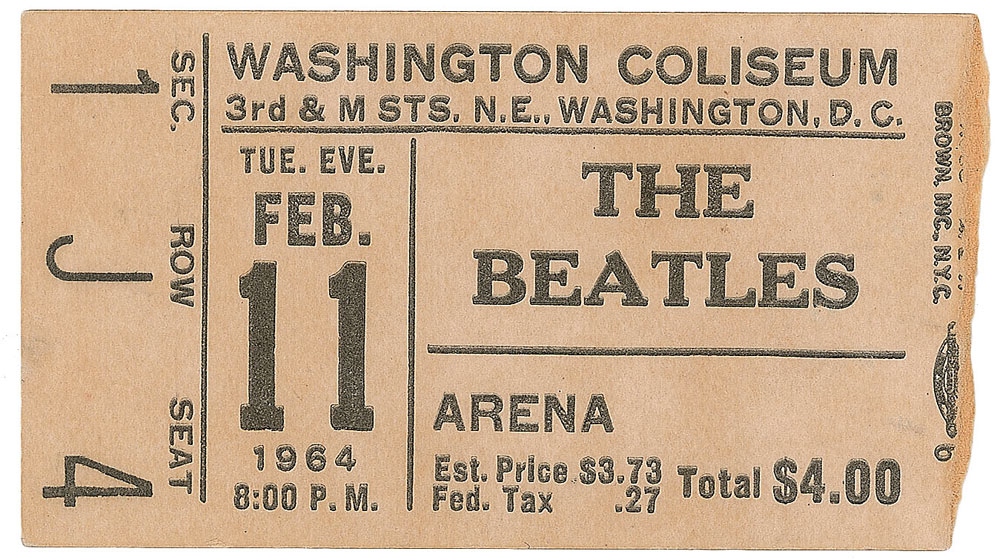 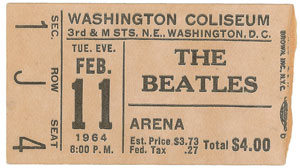 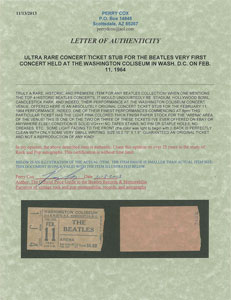 Rare ticket stub for the Beatles' first-ever American concert, at Washington Coliseum in Washington, DC, on February 11, 1964, measuring 2.75 x 1.5, for "Sec. 1, Row J, Seat 4." In fine condition. Accompanied by a letter of authenticity from Beatles expert Perry Cox, in part: "When one mentions the top 4 historic Beatles concerts, it would undoubtedly be [Shea] Stadium, Hollywood Bowl, Candlestick Park, and indeed, their performance at the Washington Coliseum…This particular ticket has the light pink colored thick finish paper stock for the 'Arena' area of the venue."

Two nights after their famous Ed Sullivan Show performance, the Beatles took the Washington Coliseum stage at 8:31 PM, before a crowd of 8,092 adoring fans, to perform their first American concert. They played a 12-song set that included 'I Saw Her Standing There,' 'Please Please Me,' 'She Loves You,' 'I Want to Hold Your Hand,' and 'Twist and Shout.' Since it was a stage in a boxing arena, the group continuously moved around to face each section of the audience—Ringo's drum was set upon a special rotating circular platform to facilitate this movement. An extremely scarce and hugely sought-after Beatles ticket stub from a historic show.