In light of the repeal of the Non-Intercourse Act, Jefferson remains suspicious of Napoleon Bonaparte's trickery: "This may put us under the ban of the testy emperor, that spoiled child of fortune" 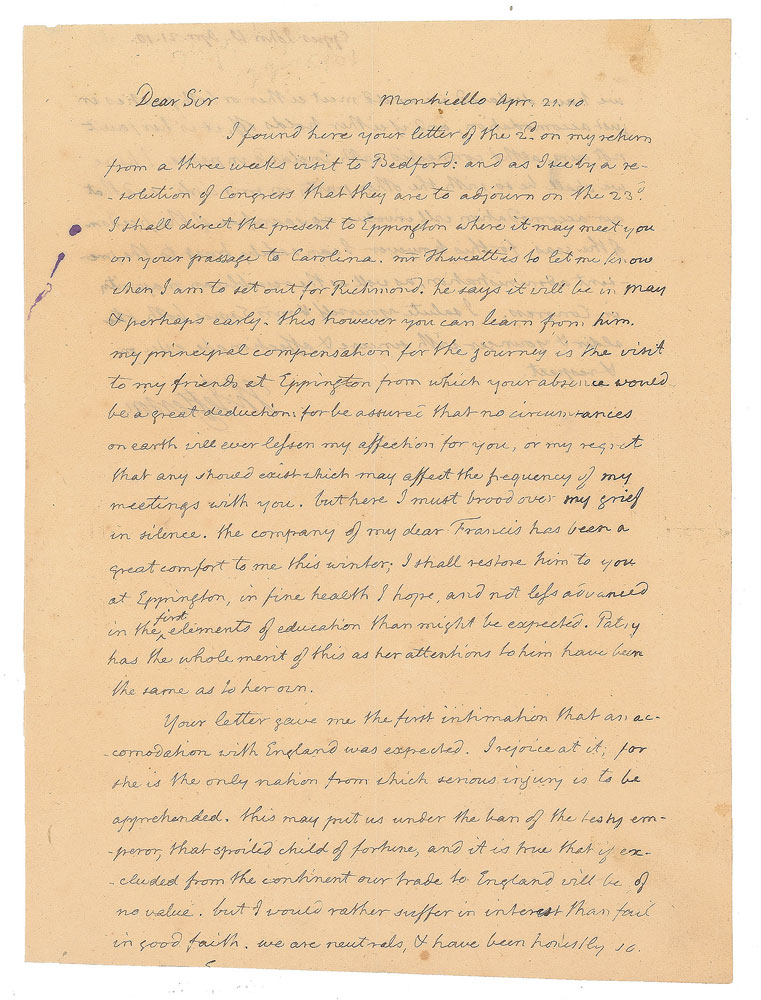 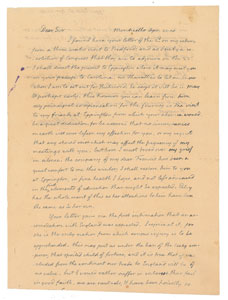 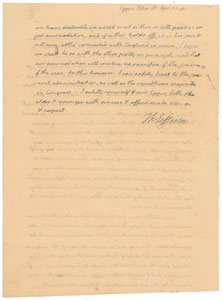 In light of the repeal of the Non-Intercourse Act, Jefferson remains suspicious of Napoleon Bonaparte's trickery: "This may put us under the ban of the testy emperor, that spoiled child of fortune"

ALS signed “Th: Jefferson,” one page both sides, 7 x 9.5, April 21, 1810. Important letter to his nephew and close friend John Wayles Eppes, written from Monticello. In full: "I found here your letter of the 2nd on my return from a three weeks visit to Bedford: and as I see by a resolution of Congress that they are to adjourn on the 23rd I shall direct the present to Eppington where it may meet you on your passage to Carolina. Mr. Thweatt is to let me know when I am to set out for Richmond. He says it will be in May & perhaps early. This however you can learn from him. My principal compensation for the journey is the visit to my friends at Eppington from which your absence would be a great deduction: for be assured that no circumstances on earth will ever lessen my affection for you, or my regret that any should exist which may affect the frequency of my meetings with you. But here I must brood over my grief in silence. The company of my dear Francis [John W. Eppes’s father] has been a great comfort to me this winter; I shall restore him to you at Eppington, in fine health I hope, and not less advanced in the first elements of education than might be expected. Patsy [Jefferson’s daughter, Martha Jefferson] has the whole merit of this as her attentions to him have been the same as to her own.

Your letter gave me the first intimation that an accommodation with England was expected. I rejoice at it; for she is the only nation from which serious injury is to be apprehended. This may put us under the ban of the testy emperor, that spoiled child of fortune, and it is true that if excluded from the continent our trade to England will be of no value. But I would rather suffer in interest than fail in good faith. We are neutrals, & have been honestly so. We have declared we would meet either or both parties in just accommodation, and if either holds off, it is her fault not ours. Altho’ connected with England in peace, I hope we shall be so with the other party in principal, and that our accommodation will involve no sacrifice of the freedom of the seas. For this however I can safely trust to the present administration, as well as the republican majority in Congress. I salute yourself & Mrs. Eppes, both the elder & younger with sincere & affectionate esteem & respect." In fine condition, with neatly trimmed edges.

As president in 1809, Thomas Jefferson had signed the Non-Intercourse Act, which lifted embargoes on American shipping and reopened overseas commerce with all countries except for France and Great Britain. Shortly after this letter from Jefferson, Congress repealed the Non-Intercourse Act and replaced it with Macon's Bill Number 2, which reopened trade with both England and France—but promised to reimpose non-importation against either belligerent if the other rescinded its restrictions on neutral trade. Napoleon Bonaparte took this opportunity to deceive the United States—he ordered his foreign minister, the Duc de Cadore, to pledge French cooperation, but he never intended to follow through on the promise. Although the French released a few American ships for the sake of appearances, France continued to prey on American shipping and imposed a new series of tariffs and export restrictions which rendered American trade in Europe virtually impossible.

In this important letter, the former president foresees the problems to come from Napoleon—“the testy emperor, that spoiled child of fortune”—and also anticipates the damage that a war with England could bring, noting that England “is the only nation from which serious injury is to be apprehended.” The conflict between America and Great Britain would soon escalate into the War of 1812. A remarkable, prescient autograph letter from Thomas Jefferson.