"I do plan to attend the Apollo 17 launch" 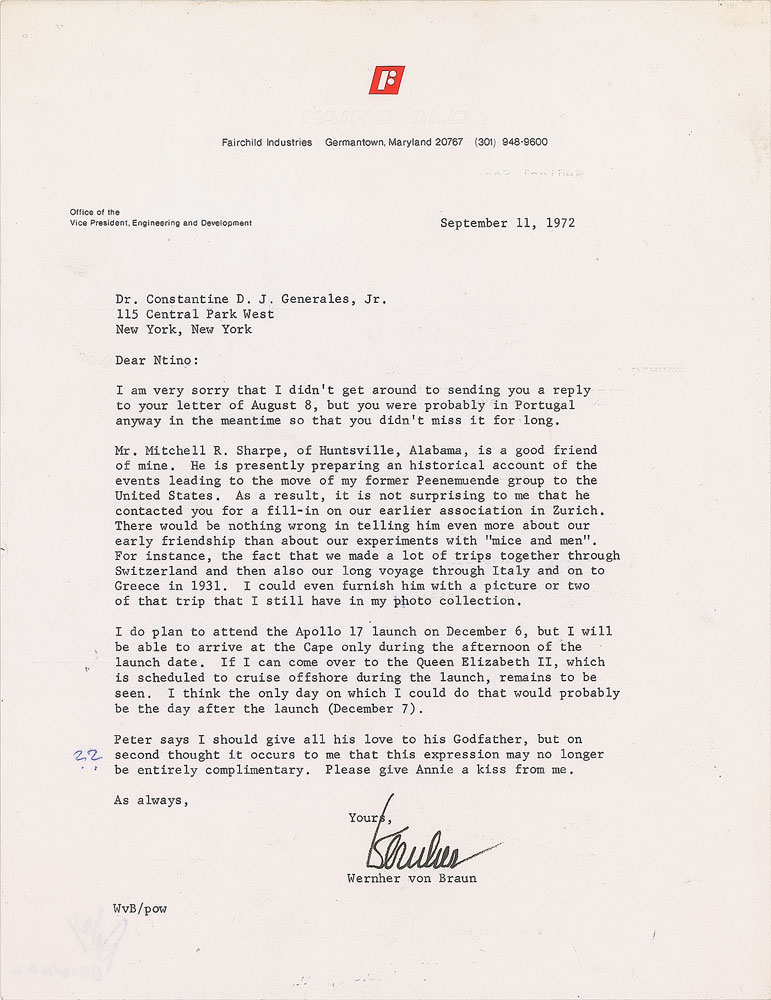 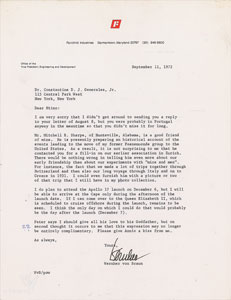 Previous Lot
Next Lot
This lot has closed
Estimate: $400+

"I do plan to attend the Apollo 17 launch"

TLS signed “Wernher,” one page, 8.5 x 11, Fairchild Industries letterhead, September 11, 1972. Letter to Constantine D. J. Generales, Jr., in part: "Mr. Mitchell R. Sharpe, of Huntsville, Alabama, is a good friend of mine. He is presently preparing an historical account of the events leading to the move of my former Peenemuende group to the United States. As a result, it is not surprising to me that he contacted you for a fill-in on our earlier association in Zurich. There would be nothing wrong in telling him even more about our early friendship than about our experiments with 'mice and men.' For instance, the fact that we made a lot of trips together through Switzerland and then also our long voyage through Italy and on to Greece in 1931. I could even furnish him with a picture or two of that trip that I still have in my photo collection. I do plan to attend the Apollo 17 launch on December 6, but I will be able to arrive at the Cape only during the afternoon of the launch date. If I can come over to the Queen Elizabeth II, which is scheduled to cruise offshore during the launch, remains to be seen. I think the only day on which I could do that would probably be the day after the launch (December 7). Peter says I should give all his love to his Godfather, but on second thought it occurs to me that this expression may no longer be entirely complimentary. Please give Annie a kiss from me." In fine condition, with staple holes to the upper left corner. Accompanied by two copies of ALSs from Generales addressed to von Braun, dated October 18, 1972, and April 17, 1974; the earlier letter, in part: "By the way, the Queen Elizabeth II is not scheduled to make the Apollo shot. Somehow, I will manage to go down to see the launch and will probably run into you there. That you have withdrawn from NASA, things won't be the same."