Monet works in London: "But what weather and how desperate I was thinking of the impossibility to paint!" 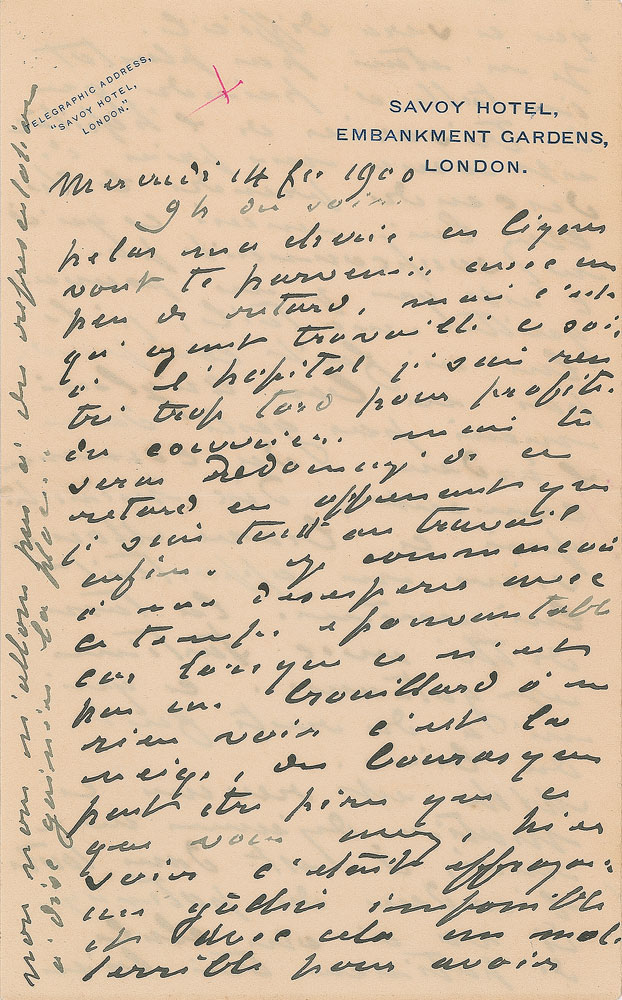 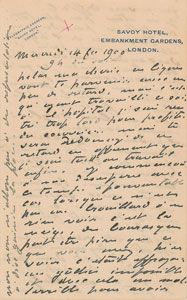 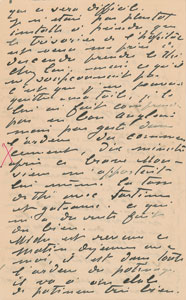 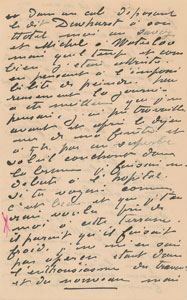 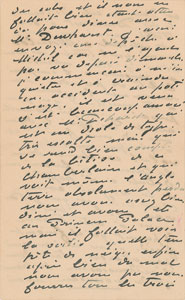 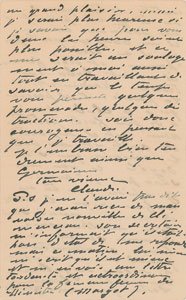 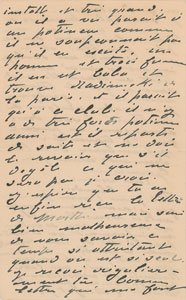 Monet works in London: "But what weather and how desperate I was thinking of the impossibility to paint!"

ALS in French, signed “Your old Claude,” six pages on three sheets (two adjoining), 5 x 8, Savoy Hotel, London letterhead, February 14, 1900. Letter to his wife Alice, in part (translated): "Unfortunately my darling, these lines will arrive with a little delay, because having worked tonight at the hospital, I was back too late to enjoy mail but you will be compensated by learning that finally I'm working. I was despaired with this dreadful weather, because when it's not a fog to see nothing, it's snow, squalls, maybe worse than what you have. Last night it was scary, an impossible mess, it was hard to find cabs and we were expected to dine with Mr. Dewhurst. I had sent a dispatch to Michel because as I’ve not seen him since Sunday I began to be worried and to fear an accident at skating. He came over and had fun with Mr. Dewhurst who is a funny guy, very enthusiastic, but who sees well the stupidity of this Chamberlain, and who even sees England absolutely lost [the Boer War]. We had a good meal and went to the Princess Palace, but you had to see the exit: what a snowstorm! Finally, after a lot of trouble, we were able to get a cab to drop off Mr. Dewhurst at his hotel, and me at the Savoy, and Michel at Waterloo. But what weather and how desperate I was thinking of the impossibility to paint! Fortunately, the day was better than I thought, I was able to work before and after lunch from my window and at 5 o'clock by a beautiful sunset in the mist, I could start at the hospital. If only you could have seen how beautiful it was. I wish you had been by my side on this terrace. It seemed to be cold. I didn’t realize because I was deeply involved in my work with enthusiasm and with the new things but how difficult it will be. I was about to paint when the treasurer of the hospital came to invite me for a tea at his home, but what he did not understand was that I could not leave my canvas. I’ve tried to tell him not in a good English but by gestures...Ten minutes later this good man brought me the cup of tea with toast and cakes which made me happy. Michel came back for lunch this morning. He is in all the ardor of skating…I hope you have finally received Martha's letter, but I am quite sad to know you with this bad weather when I am so alone. I regularly receive your good letters which makes me a great pleasure, but I would be happier if I knew that for you both the hours are more pleasant, and it would be fine while working to know that the weather can help you to have some walks and some distractions. So be strong in thinking that I’m working. I kiss you tenderly as well as Germaine.” He adds a postscript: “P.S. I did not tell you that I had not bad news from Clemenceau. His secretary informed me that he was unable to answer me but this morning, he wrote that he is better and sent me an extraordinary letter for the famous wife of the Minister (Margot) [Margot Asquith, Clemenceau’s friend]." In fine condition.

At the beginning of February 1900, Monet returned to London to capture the mists on the Thames. He moved to the Savoy Hotel, and from his bedroom, he executed a series of paintings of Parliament and bridges of Waterloo and Charing Cross. In this remarkable letter, he discusses the difficulty of his work in the rainy London weather, visiting with his son Michel, and his friend Georges Clemenceau. A remarkable 'slice of life' from the renowned Impressionist, describing the intensity of his artistic process—"I could not leave my canvas."