Important fragments from Sartre's draft for Les Mots, the autobiography of a writer 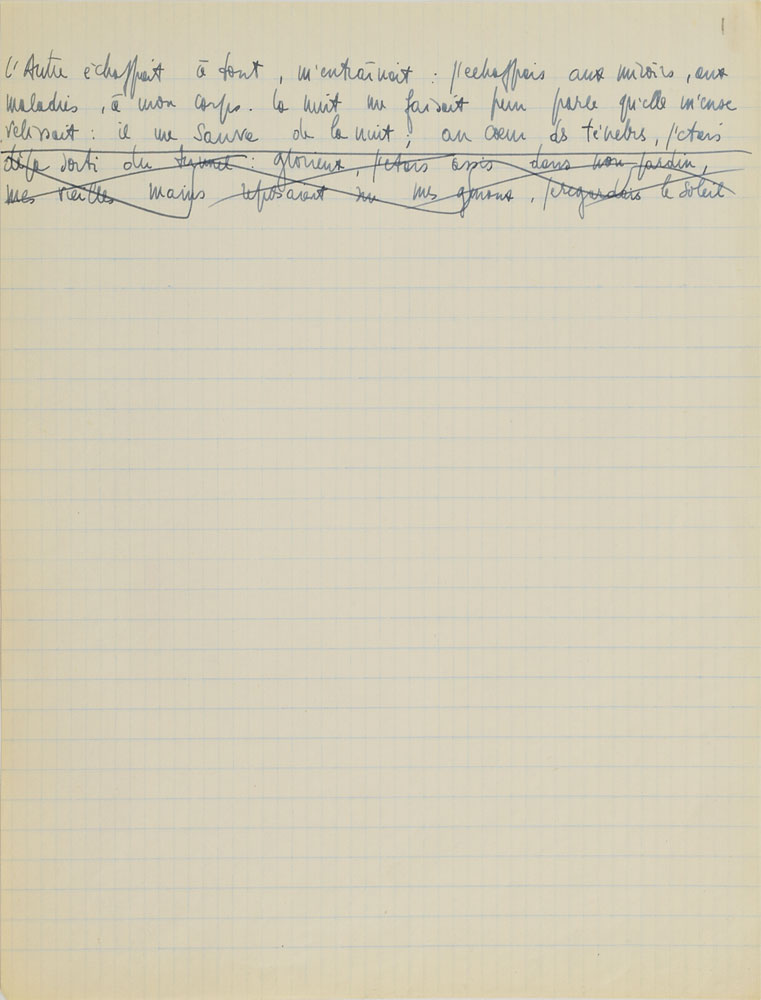 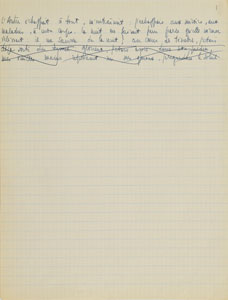 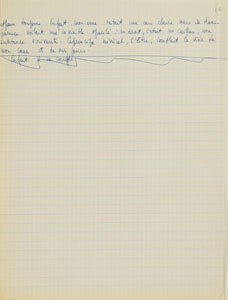 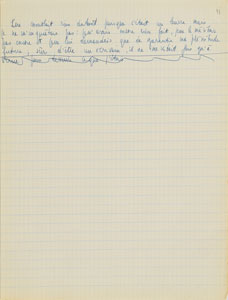 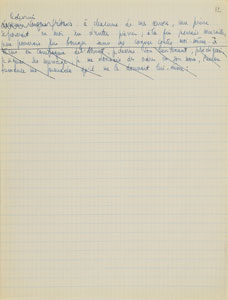 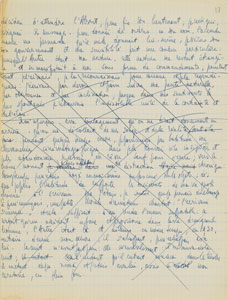 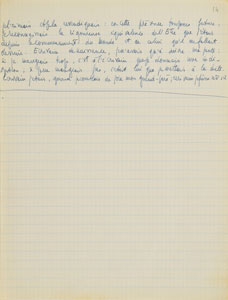 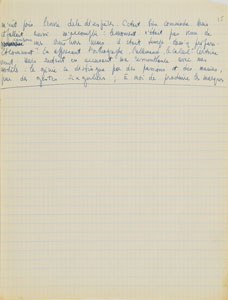 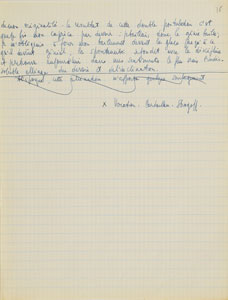 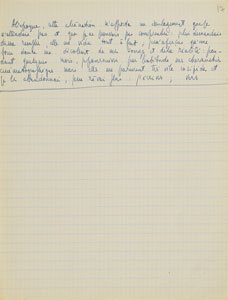 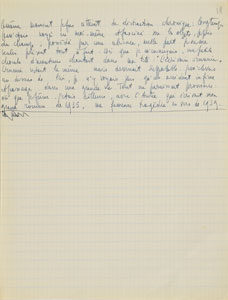 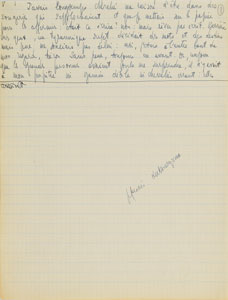 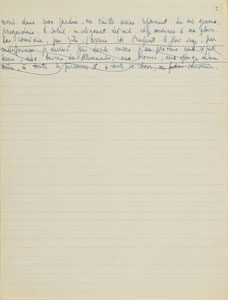 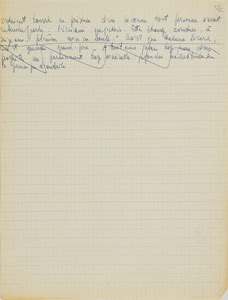 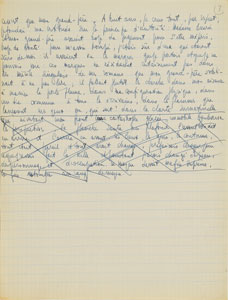 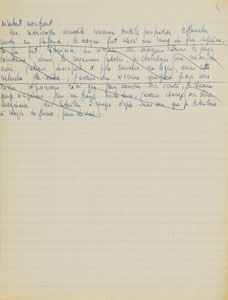 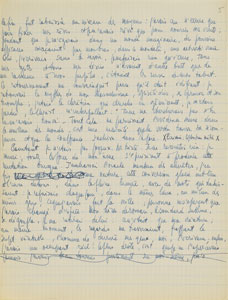 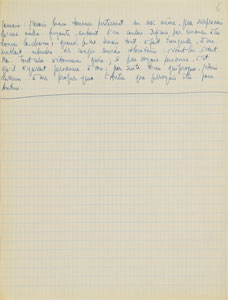 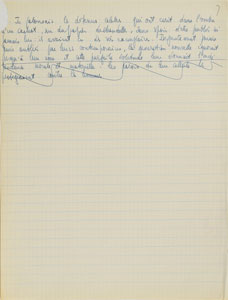 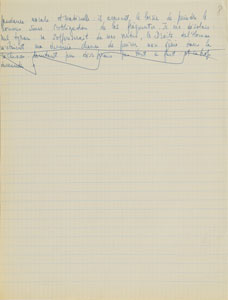 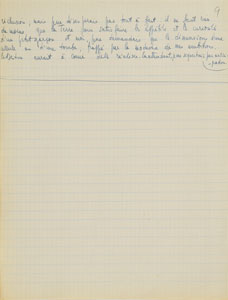 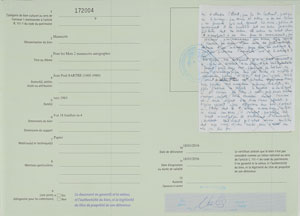 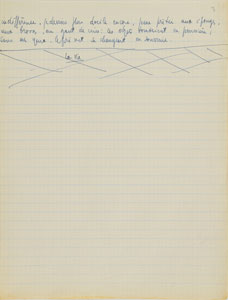 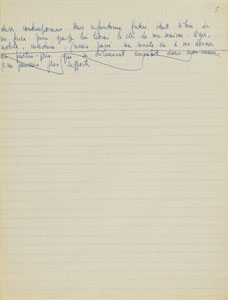 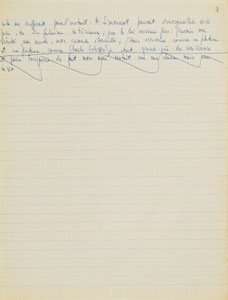 Important fragments from Sartre's draft for Les Mots, the autobiography of a writer

Two important fragments from Sartre's handwritten draft for his autobiographical work Les Motes, totaling 27 pages, 8.25 x 10.5, no date. Both relate to the second part of the work, "Ecrire [Write]," describing his development as a writer in his youth, but they were apparently unpublished in the book. Most pages have not been entirely filled: Sartre drew a line after the selected lines (from 2 to 26), striking out the sequence which did not satisfy him and moving on to another page to write a new sequence; the text of each of these two fragments is continuous, and presents whole sentences and paragraphs crossed out. The first, nine-page fragment reads, in part (translated): "For a long time I had been searching for my raison d'être in fanciful dreams, which I put on paper to strengthen them: was it to write? No, but dream in writing. Behind my eyes, a tyrannical subject decided words and destinies but I did not care about him: I was at the other end of my eyes, hero without fear, always ahead. Now, one day when the grown-ups had wanted to surprise me, there was no stupid little boy or wandering knight on my desk: they had been in the presence of a stranger whom no one had heard of: the writer that I was."

At age eight, Sartre could not question the authority of Mrs. Picard and her grandfather on his vocation as a writer: "I envied the famous inmates who wrote in the shadow of a dungeon…without hope of being published or ever read: they had exemplary lives. Unjustly punished and forgotten by their contemporaries, the new generation knew nothing of their name and this perfect solitude gave them moral and material independence: they had the leisure to paint the norms without the obligation of frequenting them. I was in despair: no tyrant would take offense at my virtues, the Rights of Man took away my last chance to draw my genius into seclusion."

In the second, eighteen-page fragment, Sartre speaks of himself as 'the Other.' In part (translated): "This Other was an object since it only appeared to the Others, a dead person since there is no living writer: the late Jean-Paul Sartre as it would be revealed to the academics of the 21st century, by his works, his correspondence and the testimony of his contemporaries. But this future ghost was so far away from me that I gave him the keys of my house…Jean-Paul Sartre, to bring down in me the inertia of things, the inconsolable pain, the unbreathable hatreds, the eternal loves which belong only to the dead souls; all of these obstinacy would end by giving me a character."

He imagined himself independent of Mr. Simonnot, equal to Charles Schweizer, overwhelmed by the Being: “To each of my works, a stone would arise in me on others stones; in the end I would be a wall.” Sartre wrote off nearly three-quarters of a page devoted to the stress and impetus behind his writing, and at the time when he moved away from his dreams in favor of everyday incidents: "If I was bored, a little amateur choir was singing…and that was enough to make the boredom bearable: it was only a small and temporary accident in the life of a great man; the Other was there and elsewhere at the same time, in 1930, writing my work.” However, he made efforts to be like his models: “Genius is distinguished by passions and mania, by singular gestures; to me to produce the marks of my originality. The result of this double postulation is that I did my caprice for duty…spontaneity melted with discipline and I find today in my true feelings the indissoluble alloy of duty and inclination.” In fine condition. Accompanied by an export certificate from the French Ministry of Culture.