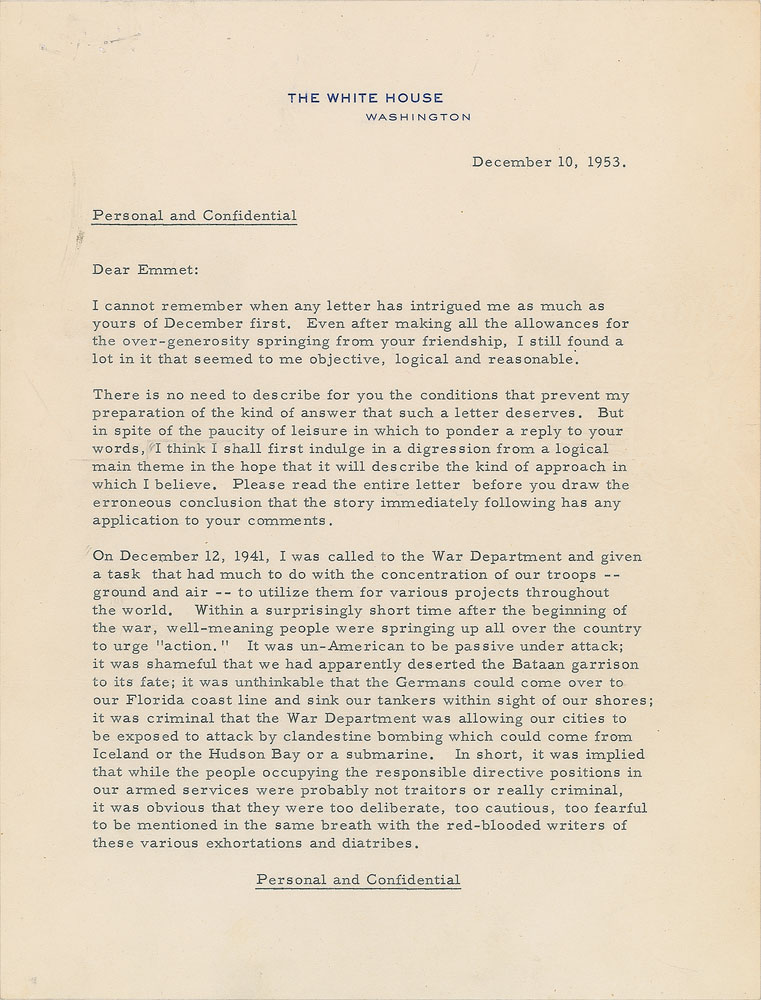 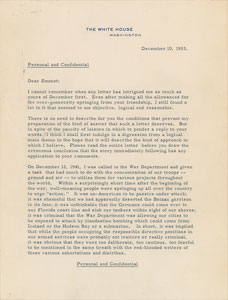 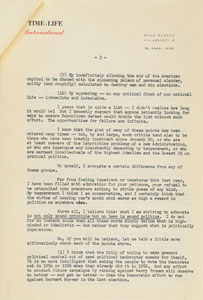 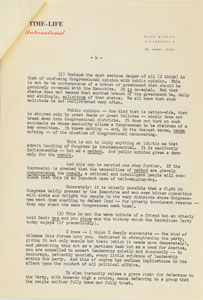 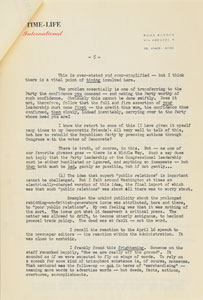 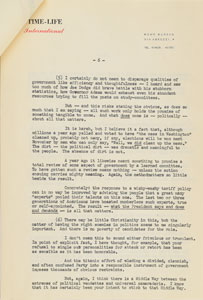 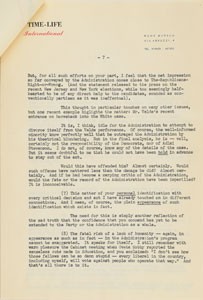 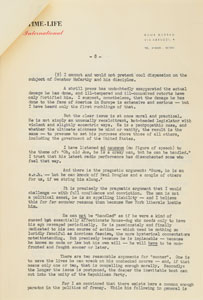 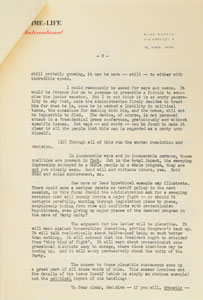 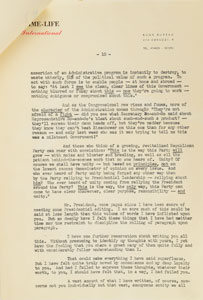 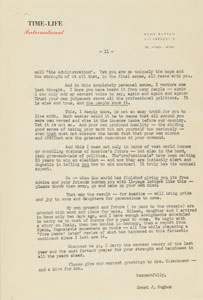 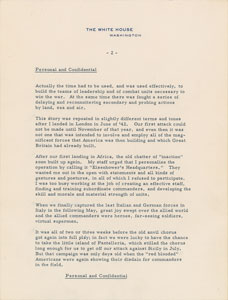 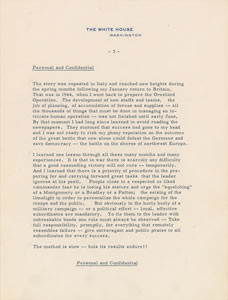 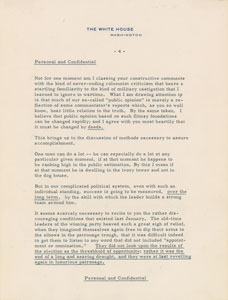 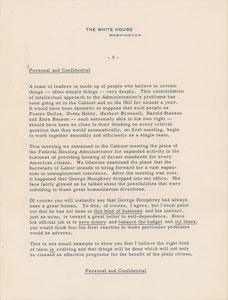 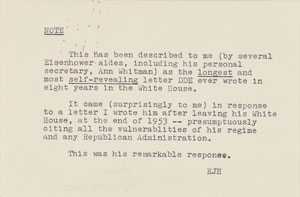 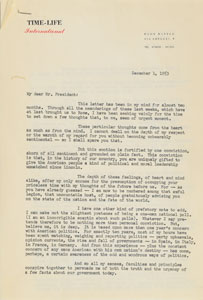 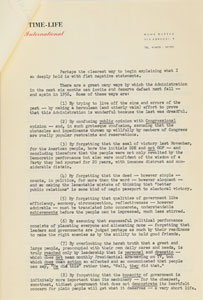 TLS as president, signed “Thanks again—sincerely, D. E.,” six pages, 8 x 10.5, White House letterhead, December 10, 1953. Incredible letter to his former speechwriter Emmet J. Hughes, in reply to an eleven-page letter sent by Hughes upon leaving the administration in 1953, which cited the vulnerabilities of his regime. Eisenhower writes, in part: "On December 12, 1941, I was called to the War Department and given a task that had much to do with the concentration of our troops—ground and air—to utilize them for various projects throughout the world. Within a surprisingly short time after the beginning of the war, well-meaning people were springing up all over the country to urge 'action.' It was un-American to be passive under attack; it was shameful that we had apparently deserted the Bataan garrison to its fate; it was unthinkable that the Germans could come over to our Florida coast line and sink our tankers within sight of our shores; it was criminal that the War Department was allowing our cities to be exposed to attack by clandestine bombing which could come from Iceland or the Hudson Bay or a submarine. In short, it was implied that while the people occupying the responsible directive positions in our armed services were probably not traitors or really criminal, it was obvious that they were too deliberate, too cautious, too fearful to be mentioned in the same breath with the red-blooded writers of these various exhortations and diatribes.

Actually the time had to be used, and was used effectively, to build the teams of leadership and of combat units necessary to win the war. At the time there was fought a series of delaying and reconnoitering secondary and probing actions by land, sea and air…After our first landing in Africa, the old chatter of 'inaction' soon built up again. My staff urged that I personalize the operation by calling it 'Eisenhower's Headquarters.' They wanted me out in the open with statements and all kinds of gestures and postures, in all of which I refused to participate. I was too busy working at the job of creating an effective staff, finding and training subordinate commanders, and developing the skill and morale and material strength of units. When we finally captured the last Italian and German forces in Italy in the following May, great joy swept over the allied world and the allied commanders were heroes, far-seeing soldiers, virtual supermen. It was all of two or three weeks before the old anvil chorus got again into full play; in fact we were lucky to have the chance to take the little island of Pantelleria, which stilled the chorus long enough to get off our attack against Sicily in July…

The story was repeated in Italy and reached new heights during the spring months following my January return to Britain. That was in 1944, when I went back to prepare the Overlord Operation…By that moment I had long since learned to avoid reading the newspaper. They stormed that success had gone to my head and I was not ready to risk my phony reputation on the outcome of the great battle that now alone could defeat the Germans and save democracy—the battle on the shores of northwest Europe.

I learned one lesson through all these many months and many experiences. It is that in war there is scarcely any difficulty that a good resounding victory will not cure—temporarily. And I learned that there is a priority of procedure in the preparing for and carrying forward great tasks that the leader ignores at his peril. People close to a respected or liked commander fear he is losing his stature and urge the 'squelching' of a Montgomery or a Bradley or a Patton; the seizing of the limelight in order to personalize the whole campaign for the troops and the public. But obviously in the hurly burly of a military campaign—or a political effort—loyal, effective subordinates are mandatory. To tie them to the leader with unbreakable bonds one rule must always be observed—Take full responsibility, promptly, for everything that remotely resembles failure—give extravagant and public praise to all subordinates for every success. The method is slow—but its results endure!!

Not for one moment am I classing your constructive comments with the kind of never-ending columnist criticism that bears a startling familiarity to the kind of military castigation that I learned to ignore in wartime…This brings us to the discussion of methods necessary to assure accomplishment. One man can do a lot—he can especially do a lot at any particular given moment, if at that moment he happens to be ranking high in the public estimation. By this I mean if at that moment he is dwelling in the ivory tower and not in the dog house. But in our complicated political system, even with such an individual standing, success is going to be measured, over the long term, by the skill with which the leader builds a strong team around him.

It seems scarcely necessary to recite to you the rather discouraging conditions that existed last January. The old-time leaders of the winning party heaved such a great sigh of relief, when they imagined themselves again free to dip their arms to the elbows in the patronage trough, that it was difficult indeed to get them to listen to any word that did not include 'appointment or nomination.' They did not look upon the results of the election as the threshold of opportunity; rather it was the end of a long and searing drought, and they were at last revelling again in luxurious prestige.

A team of leaders is made up of people who believe in certain things—often simple things—very deeply. This consolidation of intellectual approach to the Administration's problems has been going on in the Cabinet and on the Hill for almost a year…This morning we examined in the Cabinet meeting the plans of the Federal Housing Administrator for expanded activity in the business of providing housing of decent standards for every American citizen. We likewise examined the plans that the Secretary of Labor intends to bring forward for a vast expansion in unemployment insurance. After the meeting was over, it happened that George Humphrey dropped into my office. His face fairly glowed as he talked about the possibilities that were unfolding in these great humanitarian directions.

Of course you will instantly say that George Humphrey has always been a great human. To this, of course, I agree, but I must point out that he has not been in this kind of business, and his instinct, just as mine, is toward a great belief in self-dependence. Since his official job is to save money and balance the budget and cut taxes, you would think that his first reaction to these particular problems would be adverse.

This is one small example to show you that I believe the right kind of team is evolving and that things will be done which will not only be classed as effective programs for the benefit of the plain citizen, but which will operate in such a way as to gain the respect even of those who too often in the past have opposed such measures. I could expand this explanation into personal terms; I could talk about literally hundreds of individuals with whom I have discussed policy and its applications. I have said enough to show you what I think I am trying to do.

I fully recognize that the responsibility is mine. Occasionally I must go on the air to let the people have direct knowledge of the important and comprehensive programs that are in the mill. But I also take the responsibility for producing a legislative-executive team that will not be too dependent upon the mere presence, words, or even the counsel of the chief, but which will, because of its complete solidarity of faith in ideas and ideals, be capable of functioning both collectively and in all of its parts. If I cannot do this, there is no question that the entire effort I have put into the political game has been wasted, and it would have been far better had I never been put into this office. On the other hand, if I am successful, that success will have a permanence that will be far greater than if it were traceable in the public mind and in fact only to an individual." In fine condition. Accompanied by Hughes's retained carbon copy of his original letter to Eisenhower on Time-Life International letterhead, as well as a typed note from Hughes, in part: "This has been described to me (by several Eisenhower aides, including his personal secretary, Ann Whitman) as the longest and most self-revealing letter DDE ever wrote in eight years in the White House."