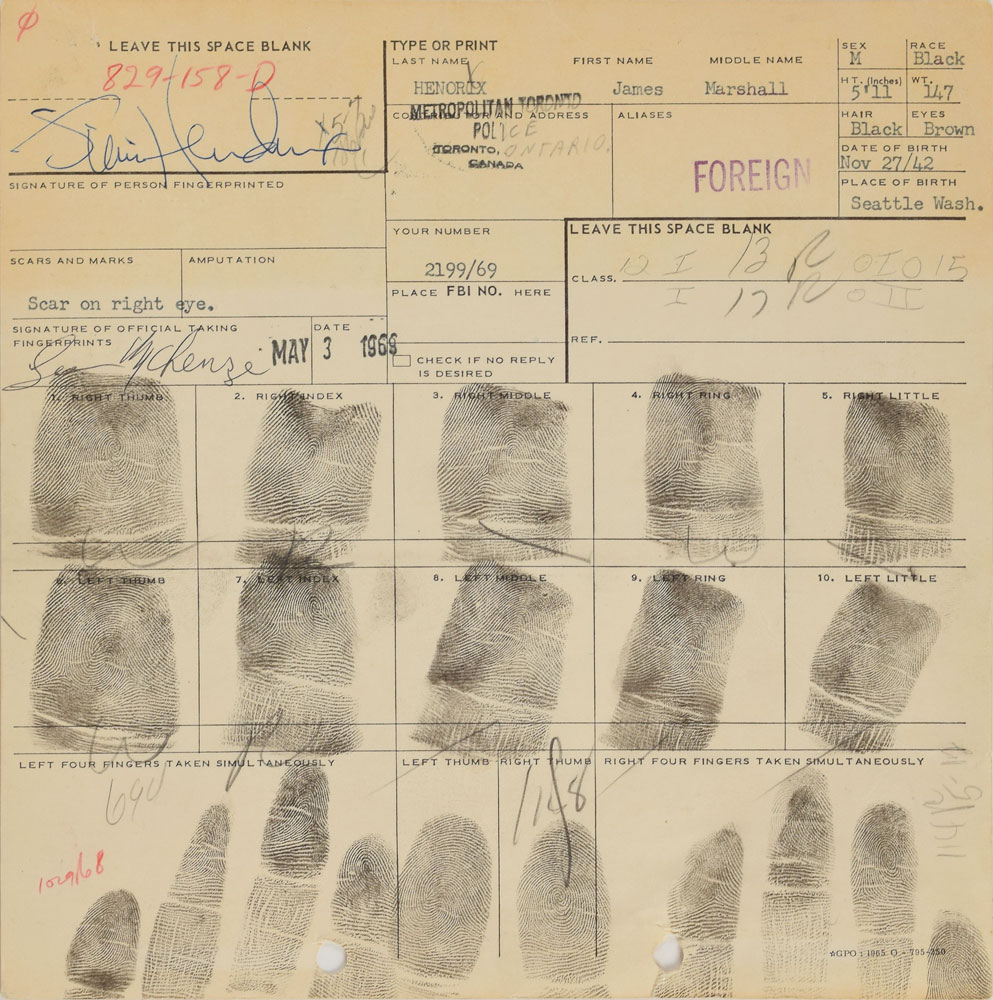 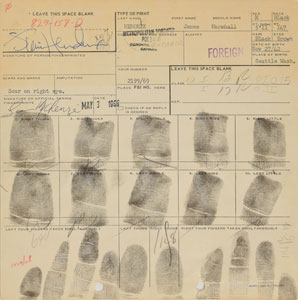 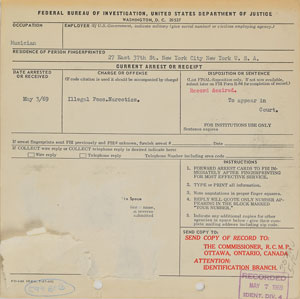 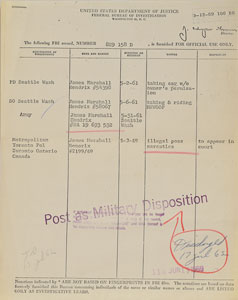 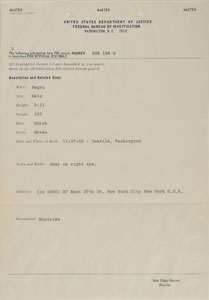 Amazing original 8 x 8 fingerprint card from Hendrix's 1969 arrest in Toronto, signed in the upper left in blue ballpoint, "Jimi Hendrix," as the "signature of person fingerprinted," stamp-dated May 3, 1969. The card is filled out in type with his personal information, including his name, "Hendrix, James Marshall"; date of birth, "Nov 27/42"; and distinguishing features, "Scar on right eye." The lower portion features individual prints of all ten of Hendrix's fingers, plus a set of prints taken simultaneously. The reverse lists his occupation as "Musician"; address as "27 East 37th St. New York City New York U. S. A."; and the charge against him, "Illegal Poss. Narcotics." In fine condition, with an area of surface loss to the lower left of the reverse. Additionally includes two FBI documents, one detailing his criminal record and the other listing his personal information.

On May 3, 1969, Hendrix arrived at Toronto's Pearson International Airport, where he was detained by customs agents after they discovered a small amount of heroin and hashish in his luggage. He was arrested, booked and fingerprinted, but released on $10,000 bail so he could make his show at Maple Leaf Gardens later that night. The police escorted Hendrix to the venue, and he displayed a jovial attitude throughout the concert—including an alteration to the lyrics of 'Red House,' adding the line, 'Soon as I get out of jail, I wanna see her.' At his May 5th arraignment, Hendrix was formally charged with two counts of illegal possession of narcotics—each carrying a possible twenty-year sentence—and the trial was set for December 8, 1969.

In order to be found guilty, the law required Hendrix to have knowledge of the drugs in his possession. At the three-day long trial, Hendrix testified that he had no idea how the drugs made it into his luggage, and that they must have been slipped in as gifts by well-meaning fans. He also insisted that he had 'outgrown' his drug use. His manager and producer, Chas Chandler, corroborated the notion that fans frequently showered rock stars with gifts, which sometimes included drugs. After eight hours of deliberation, the jury returned a not guilty verdict. In remarks to reporters, Hendrix commented, 'Canada has given me the best Christmas present I ever had.'